Well, do you remember gaming classics like "Harvest Moon" and "Zelda"?
"Cropling" is the best of both worlds and you are in for a treat if you like them.

Cropling is designed to be a role playing game with strong harvesting and farming influences. It will be released on mobile platforms, PC and Mac. Besides managing your own wonderful farm you can explore the exciting world of "Cropling",
master perilous quests and fight ravenous Monsters.

I want you to be creative, and to come up with your own ways to cope with difficulties, to personalize your farm and style and discover the secrets, treasures and plots in the world of "Cropling".

Decide what and when to plant ! Veggie-friendly? Plant, water and harvest a wide range of vegetables, fruits or
even foliage that only provides raw materials for house constructions.
Your decisions directly affects the future of your farm and the ones of the adjacent towns.

Extend your Farm !
Personalize your farm and boost your business by building a shed, barn, mill, brewery tank, greenhouse and more !

Keep your own livestock !
Take care of cows, chickens, horses and/or other animals.

Befriend with pets ! Accompanying you and helping you out with your daily duties,
each animal comes with unique ability and teachable skills. Trust your dog with guarding the livestock or let your cat chase away harmful rodents.

Go on adventures ! Explore the world of "Cropling", discover great treasures and solve challenging riddles.
Defend the nearby city from raging beasts,
challenge them on their hunting ground or defeat them in their lairs. Start a family !
Find the partner of your dreams and become a dad or a mom.
Raise and take care of your children.

You're a young boy/girl on the way to your uncles farm.
Simply because your parents sent you over to help out for spring season. Well, kids can be adventurous sometimes, so when you find your uncle's farm deserted you simply write a letter to your parents that you arrived and are well -

Eventhough you realize that this circumstance is out of the ordinary.

But still the question about the whereabouts of your uncle waits to be answered! So you make contact with the citizens of a nearby village but everything you
come to know is that they don't know where your uncle is neither.
He cant be gone for to long ! There should be some fresh traces around... You find some footprints who are leading to a riverside. Unfortunaly you have to cross the river to keep following them, but you cant swim yet.
Mmh... Maybe you should come back in winter, when its frozen !

Apart from that you cant let your uncles lifework go to waste and take on responsibilty for his farm, for as long as he isnt to be found.

To solve the mystery of the current whereabouts of your uncle, you need your common sense and good investigation skills.
For keeping you fed and maintaining the farm you need devotion and patience.

Yet again it is time to talk about the progress of Cropling.
(Especially when the voting is still on. Oh cmon, of course I'm gonna mention this. :p )

I reworked the acre system and its now more dynamic than ever !
Its the 3rd attempt if I recall correctly, and I finally feel like its
up to standard aimed for.

Or close to it at least, but see for yourself: 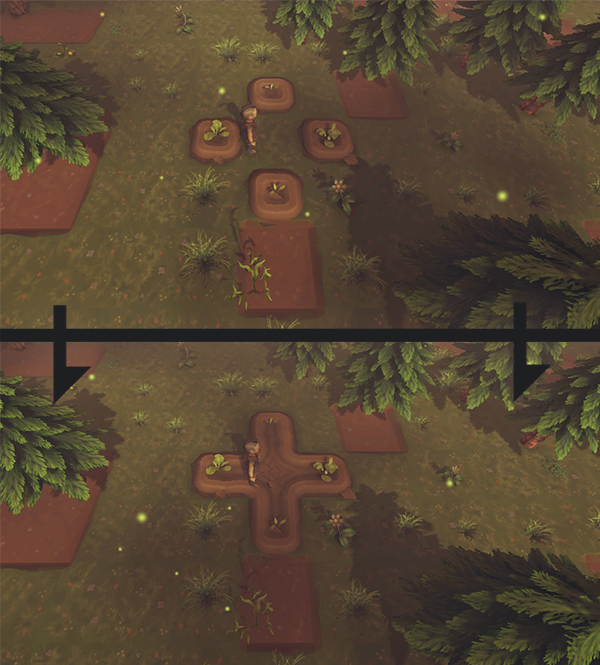 They conjoin automatically of course, so you can build any imaginable crazy pattern.
Diggind up fields is consuming stamina though, so you want to be careful not to
overwork yourself or to dig in disadventeous positions or orders.

Like me going wild while testing (probably how you shouldnt do it): 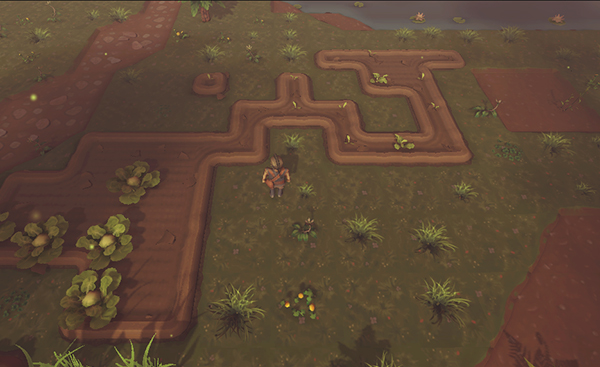 Also, the animal creation stream wasnt discontinued, even while improving other parts.
They already play a important role in the alpha, so I have to keep pushing them through.

So, lets hear what the fox has to say: 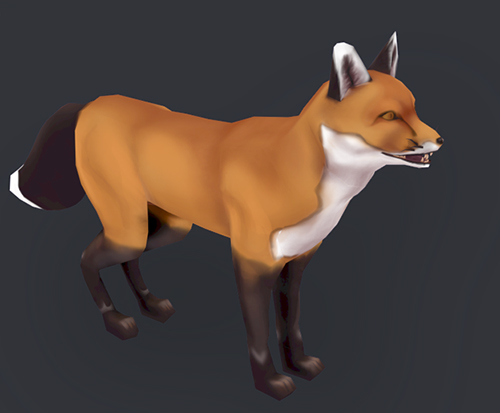 He is known to be shy, so get used to see him mostly from behind, running from you. :)

...while the Frog, in some cases, will even jump on you.
What a little bugger 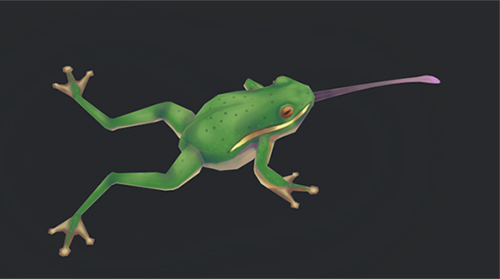 Thank you for your attention, I hope you are also satisfied
with the current progress, It gets closer to the alpha milestones with huge steps !

Also the official forum and website is almost done.

And just as a reminder *cough cough*
voty for goty

Did some new night effects and reworked some content !

I worked on houses, the ingame menu and alot more...

Also its the last chance to support me by pre-ordering Cropling on IndieGoGo. (look at the perks, right hand side)

Cloudy days can be lovely days !

Added random cloudy days ! Yes, they will affect your crop.

I actually want to relaunch this title next year, to see what chances I have to get this funded on kickstarter or somewhere else.

So Im sry to tell you that there probably will no more updates this year. Cant even tell if I will make it early 2015.

Any news on this one?

Unfortunately not yet.
Still working on it though !

I know its not much but i voted and shared links for votes for your game o_o i just think it has the most potential of all the games here :)

Thank you my dear CatBerry, hehe :)

I totally forgot about the voting, quite a suprise for me today,
I'm thrilled !

you should ring the bell about it to your fans ;)
by the way... is it possible you are german? o.O?

Just curious, will there be only the male character?

No, there will be multiple characters to pick from.
Different genders and races also ! :)

And every one comes with unique abilities.

That is great :3
I totaly dislike it when there is only male gender =_= I mean i do not really want to play male characters, i can not relate to them :|