When the terrorist attacked Chernobyl Power Plant, captain Yuri Ryakov was sent to sabotage their efforts and destroy radioactive material transports. He succeeded... partially. Now, Russian Army is attacking terrorists' positions in Chernobyl. However, despite their numbers and aircraft support, they are having tough time trying to defeat the terrorists. They seriously fear the terrorists may take enough radioactive materials away, before being defeated. Yuri, who knows the area very well, is assigned a partner - captain Fedor Strushyn. Together they are sent forward and into the battle, to destroy all the enemy transports they can. This is an epic voyage right into the heart of the battle, and further away - to the Middle East, in pursue of the last stolen radioactive transport. 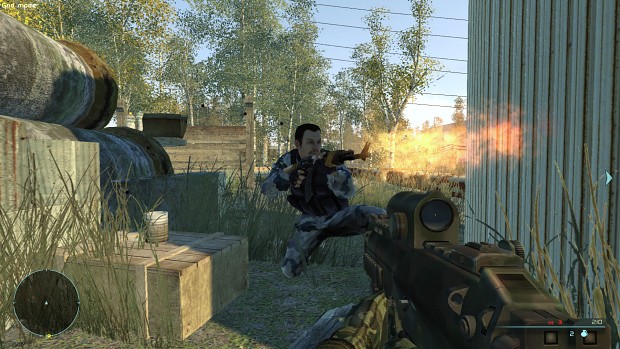 Action screenshot for Chernobyl Commando. Unaltered except for jpg conversion.