Castle Flipper is a unique chance to become a medieval royal craftsman. You can re-arrange the castle, at your own discretion. Breathe a whole new life into the old rooms and prepare a great feast for the king!

Castle Flipper Patch v1.2 is now LIVE! We have included many fixes, as well as some requested improvements.

We’re happy to announce that Patch v1.2 is now LIVE! We have included many fixes, but other than that, there are also some improvements and changes that should make your flipping experience a little better. :)

When trying to place any object that requires snapping to another object, you will now see snapping points, which indicate where you can place it. A lot of you encountered problems when trying to place certain objects, such as a set of stairs in your house – we hope this addition will clear things up a little.

We have finally fixed the issue that has been bothering you for some time now. No longer will the rain make its way into your houses! Sure, maybe that won’t impact your gaming experience all that much, but your tenants definitely wouldn’t want to get drenched in their sleep. ;)

We have made some improvements to the rotation mechanic. Most noticeably, if you feel the need to move a piece of furniture rotated in a certain way, its position won’t reset to the default one. In other words, when you decide you want to move your wardrobe turned sideways a bit further to the back, when you pick it up, the wardrobe will still be turned sideways, exactly how it was before.

Similarly, when you want to place a few identical objects, once you rotate the first one and put it down, the next ones will be rotated in the same way from the get-go. You won’t need to rotate overy object individually, unless you actually need to do that.

A new set of stairs 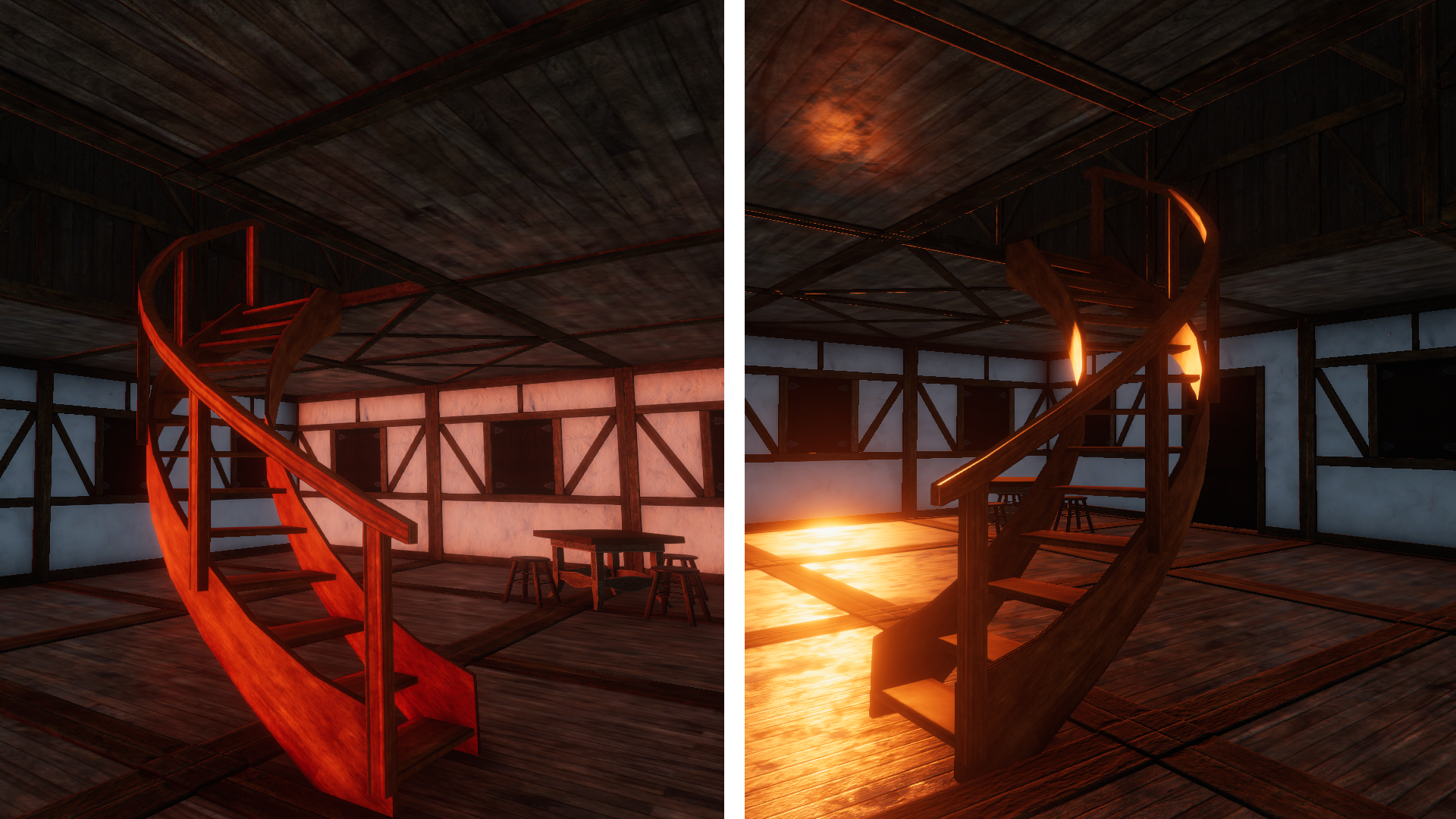 Picture speaks for itself! While you may recognize the aesthetic, the idea was to provide you with a mirrored version of the spiral stairs, as some of you had a need for it. 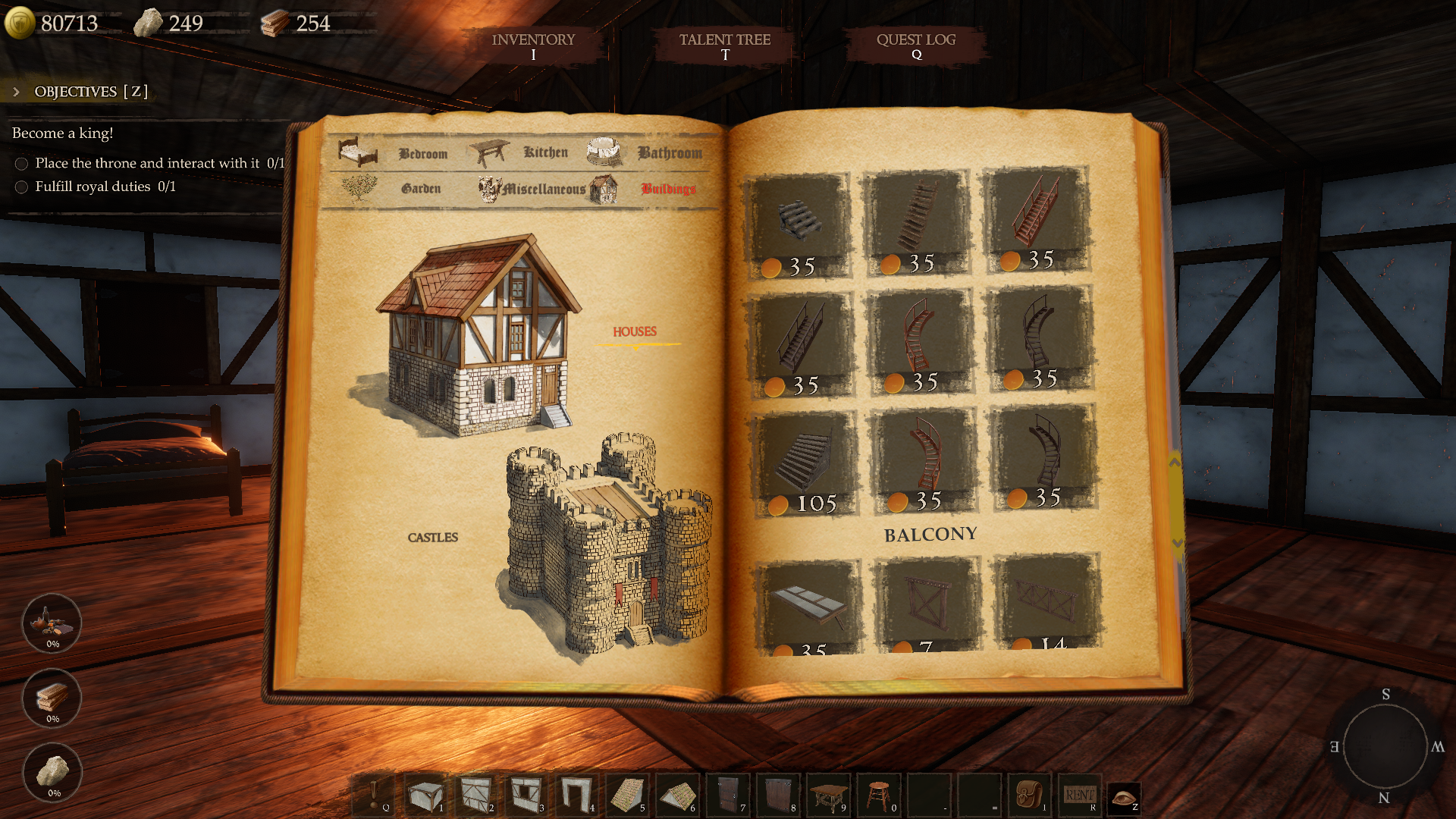 For a full list of changes, see the changelog below:

- improved colliders of couches and chairs, preventing objects put on them from “floating”

- improved interaction with a button that closes Options window

- made corrections in German translation

- included fences into the property value

- improved the effect of destroying a small castle foundation

- corrected graphic of a Royal Cleaner

- modified borders of the Kingdom wall acquired with the last upgrade, making it impossible for buildings to pass through the wall after the upgrade

- improved snapping of the gardens and small stairs attached to foundations

- got rid of duplicated furniture in “Residence of Lord Craft”

- added one chest with a furniture, so that after finding all the chests, all puzzles are available

- improved snapping of roofs, balconies (attached to “ordinary” and rotated door) and fences

- stairs' handrails should no longer go through the wall

- added snapping of battlements to foundations

- weather effects should no longer pass through roofs

- when moving an object after placing it in certain position, its rotation angle will not change

- when placing multiple identical objects, rotation angle set to the first object will be applied to every object placed afterwards (rotation angle will be reset after picking another object from the Inventory)

- added a small delay after placing an object, so the red ghost of an object doesn’t appear right afterwards

That’s not all! Make sure to play the new version to see all the details, there is no better way to experience those changes than by launching Castle Flipper and doing some flipping in your Kingdom.