Calcu-Late is a game about a boy named James who needs to participate in a godly olympic tournament as a representative for the goddess of mathematics, Seshat. The tournament will grant the participant a wish that they stated before the tournament starts. James is gonna take a final exam of math in his school, yet he forgot to study for it. His wish is just to pass the math finals.

The game consist of several stage which involves different puzzle with story cut-scenes in between. The game itself is quite linear and has auto-save feature in each stage so if you failed in a certain puzzle, you can try again by clicking continue.

On every stage there will be a trial phase and a battle phase. In the trial phase, the player will be given a puzzle that can be solved alone by thinking or calculating it and it will be continued to the next phase. In the next phase, which is the battle phase, the player will have a match against the computer or AI. It will be a battle of wits which require concentration and patience. 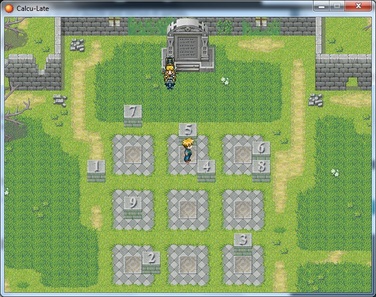 "Go through trials before facing your opponents!" 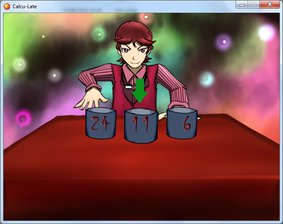 "Face against genius opponents in a battle of wits!"

To promote Calcu-late and grow its popularity (top games), use the embed code provided on your homepage, blog, forums and elsewhere you desire. Or try our widget.

The Demo for Calcu-late consist of two difficulties, easy and normal. For higher difficulty and unlocking the whole story, you need to get the full version...

Translate the description back to Spanish Translate A trivia game for 1-4 players, in Spanish and English. With two game modes, board game either against...

Simple game for kids to learn spelling by dragging letters to their places.

Sheepless Nights (also known as Kids math cardgame) is an entertaining and educational (math) cardgame for kids (5+) and grownups. Get rid of your sheep...

No, this is not a video of the YDKJ TV show that aired on ABC in 2001. It’s the YDKJ PC game with trivia all about TV shows! Fans of host Josh "Schmitty...

Yasminoku is a sudoku game, generator and solver created by Joan Alba Maldonado on 25th of July 2006 which has been now improved.

Blocksworld is a lighthearted build-and-play system for kids and grownups alike that brings the imaginative play of toy blocks to your iPad's touch-screen...