Botlike - loot and shoot your way through hordes of robots or die trying. Play as S.I.R. - a grumpy old warbot on his path to revenge. Use your ever-growing arsenal of weapons, upgrades and powerful items to defeat an evil and totalitarian robot league. Grab your top hat and let the rampage begin.

In this intense and fast-paced shoot 'em up with roguelike elements like permadeath and randomized levels, it's all about maximizing your killing game. Adapt to different situations and increasing difficulty by collecting different weapons and upgrading them. Find powerful items and use the unique item system to combine them into super items, or even ridiculously strong monster items. You will need to use every trick and advantage you've got: dash or double jump to overcome the pure number - and firepower! - of your enemies.

- Play as S.I.R., an eccentric and grumpy old warbot on his path to revenge

- Collect and upgrade an arsenal of deadly weapons

- Use your dash, double- and wall-jump to avoid getting killed

- experience permadeath (you know you love the rage)

S.I.R. was sitting in a wing chair in his old country house near Rust Town, grumpy as usual. After all, he was old; a discarded warbot, who had fought in the last and final war on earth, back in the day; and this particular morning had been exactly as boring as the last 3513 days. He sat there, listening to old human music, lost in his memories of the war – *Boy, that sure was exciting!*, he pondered. The meat sacks had always burst into such delightful red fountains when he'd hit them with his minigun, or his trusty rocket launcher. Ah, those were the good old times...

At the same time, somewhere outside of Rust Town, the League of Super Intelligent Robots were installing their new orbital station. The League had emerged as war heroes in the fight against the human creators – and after the war was won, they were now the official and undisputed leaders of the robot nations all over the solar system. The election had been very 'democratic' and 'fair', as the overwhelmingly powerful Security Service of the League so tirelessly announced... 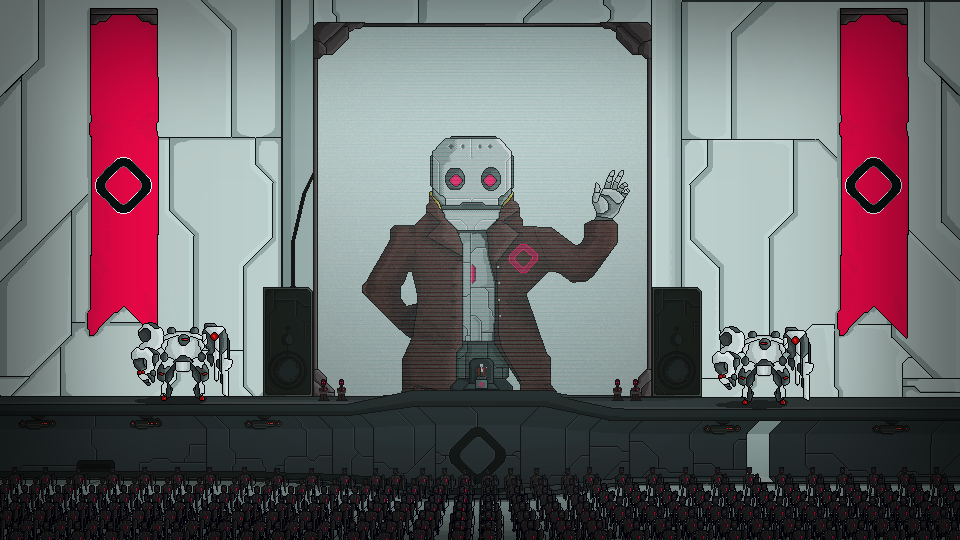 While the League installed their orbital station, an immense amount of energy was released upon the planet. It caused a gigantic tidal wave, heading straight towards Rust Town. This place had long been forgotten by society, only a mere story to scare the newer models... Except it wasn't. It was, in fact, a city brimming with old and discarded robots, still living their lives and doing what they'd been created for.

So, on this fateful day, S.I.R. looked out of his little window with its quaint vintage curtains, and saw - - - a huge tsunami coming straight at him! S.I.R.'s emergency systems took over. He immediately pulled the ejection trigger, catapulting himself out of his house and high into the air. He could see the massive wave crushing his house, and everything else in its path towards Rust Town. Shortly after, as he plonked down safely in a nearby forest, his emotion systems reactivated. S.I.R. could only think of one thing - He was going back to war.

THE LEAGUE WERE GOING TO PAY!

it has been quiet for a while now in Rust town. But the League isn't destroyed yet. Quite the Contrary. They are getting stronger every day as if they knew that something big were coming for them.

Today's patch will bring you a load of new content and probably several hours of shooting joy. There is a new boss - the „Sägewerksvorsteher“ - chief of the regional forest clearance department. And he is not happy to see that S.I.R. is killing all his workers. So be prepared for an assault!

He will be the last resistance in the outer skirts of Rust Town and after defeating him you can continue your way and search for an entrance, a possibility to get up in their station and defeat the League once and for all. A friendly engineers unit told you that there is an outpost of the League somewhere in the huge graveyard just behind the mountain. A huge battle took place there, when the last war was fought and is now the last home for millions and millions of brave brothers and sisters. They have a transportation device there for sure. It has to be. But it will be protected.

This will not be easy terrain. You have to adapt to new situations and obstacles. But we have widened your upgrade options. The overall progress you get through buying new parts at the Gemischtwarenhändler in Rust Town has been reworked and new tiers has been added. And you probably going to need them all.

At least if you are trying to beat all the 6 new difficulty modes we implemented. Starting the game their will be three modes unlocked. Civilian Mode (easy), Standard Unit Mode (normal) and Decorated Warbot Mode (hard). Beat the game in the hardest mode and unlock the next one. Keep your progress (or reset if you like the pain) and become the ultimate war machine as you fight your way through the army the League sends against you in ever-increasing waves.

And of course there has been quite a lot of bug fixes and tweaks. Further balancing and little improvements here and there. Below you find the complete patch notes:

- added new Boss to the end of level one. The Guardian is now protecting the Scrapyard and is still your final encounter

- added 2 new kinds of turrets. One has a fixed position, the other aims at the player. They both are equipped with different weapons and shooting pattern

- added new firetraps that deal damage and knock back

- fixed champions no longer can be killed with incinerator

- a lot of bug fixes and tweaks

We hope everyone will enjoy this new patch. As always, please feel free to leave us a comment or feedback here on steam. Or visit us on twitter or on our discord server.

And dont forget, Botlike is currently 50% off, over Brightlocker (limited amount)

Botlike now on Brightlocker! 50% off!

Botlike is now on Brightlocker and on sale for 50%. Its limited so make sure to come by and grab a steamkey. Also news on the current status and what...

Botlike - a robot's rampage Early Access is out now!

Botlike - a robot's rampage is now available on Steam Early Access. Help S.I.R. get his revenge!

Botlike - a robot's rampage, the action shoot'em up with roguelike elements, will hit steam early access next Thursday (14.09.)!

Botlike - loot and shoot your way through hordes of robots or die trying.