Check us out on Steam! And be sure to wishlist us for when we go live!

Fight your way through the many floors of "The Labyrinth" in this classic inspired top-down action adventure as you embark on a quest to save the blorb from the evil King Wego!

Along the way discover new powers ....find old friends.... and overcome the impossible oddsahead of you. 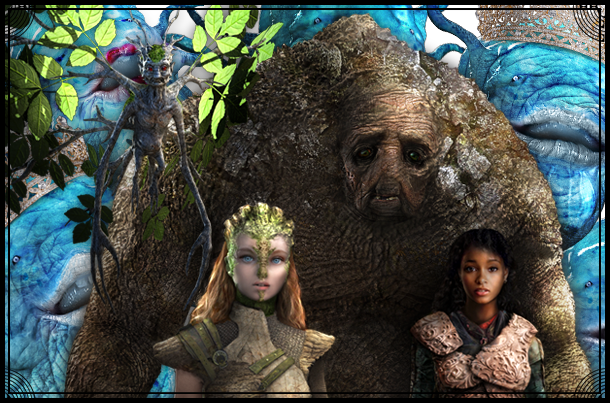 Will you sneak through the hallways as fog? Become a master of the webs? Or perhaps use wind barriers to keep enemies away? It's up to you to find these powers...and decide how best to use them.

Art of an Indie Game - Episode 2: The Creatures

Hey everyone, in the last video I went over the general world maps, so now let’s talk about the creatures that fill everything out.

Normally the approach to making the creatures would be fairly straight forward…. But the path to creating Memories has been pretty unusual….and the creature side of the art is actually something that began long before the game itself.

I guess you could say back then it was a learning and exploration phase. Not just in trying to find a direction to start the Bloom world….but also artistically in finding a style and process that worked for me.

Around this time I was also bouncing all over the place in terms of art. Learning video editing….rendering….. along with struggling just to get a grasp on the basics of 2d art.

I made a lot of concepts back then, with a surprising number revived over the years and updated to be used.

Eventually I began to learn how to make the concepts into 3d models with programs like zbrush. I really dug into it, finding it a lot more enjoyable than 2d drawing.

Though I was working on a lot of different types of art. Making jewelry designs, portraits, all sorts of things really. Funny how such a variety of that first work still lives today, like even finding a way to use the jewelry designs in the game.

Anyhow, at the time I still had no idea what it was all for besides practice. I’d considered a lot of ideas…. Such as a webcomic at one point…or when I called and talked to the vice president of Nickelodeon with dreams of being an animator.

But soon I latched onto the idea of an indie game...so shifted focus to began working on that goal.

Creature wise, the first step was I’d need a main character. So, I chose an earlier versions of Ilana, finishing one of her early models and teaming up with an animator to help get some basic animations done.

And that’s what we first went to kickstarter with. The concept centered on Ilana with a couple early models.

And even though the kickstarter failed, I somehow found myself with the opportunity to pitch a smaller game in a couple months for a show run by IGN. So I got to work and created a new main character for a related story….what would eventually become the core RPG, Memories.

Fast forward a year or so, a couple more kickstarter attempts, and somehow we finally had a win….we were backed!

But at this point all I had were a handful of creatures in pretty rough states….not even textured, let alone rigged and animated. To make things worse the animator had left, so...yea, there was a lot of work ahead.

So I got to it and I began going through each area trying to come up with creatures that would fit. Sometimes digging back into older models and concepts to work on again, othertimes creating quick concept sketches and diving straight into the modeling.

Overall, the entire thing was a several phased approach.

First were the general creatures. Not enemies, just creatures that lived in the world. That was a big guiding principle for a lot of aspects of the game design actually….that we weren’t creating a game, we were creating a place.

So I created a lot of snails, slugs, water wolves, and all sorts of other animals that wouldn’t necessarily be hostile. With a sub-category that I created with the potential for a companion mechanic, keeping them small enough that it would make sense to pick them up, like the wiggle mite in the prelude demo.

That’s also largely how I came up with their designs. Thinking more about animals in a forest….and doing research to help inform the concepts and abilities.

It’s also surprising how anti-game logic real creature design is. In game worlds they will tell you to create a blue enemy for a forest, because it stands out easier against the green of the forest for the players to see. But in the real world it just doesn’t work like that.

This is also a big reason creature concepting is so fun, because it is endless research and learning about the world we live in...and then taking those principles and trying to apply them to your own creations.

Personally, I wanted to create a more believable world, especially with creatures, even if it is more work….but it has been a constant balancing act with the realities of gameplay.

Game design wise there is a lot to dig into here, especially with how creatures behave, but visual design wise hopefully that explains where I was coming from with some of the more realistic creatures.

Anyhow, after that first phase of creating a variety of animals….next it was time for factions. Of course the big baddies were the robot faction….so they got a set of diverse character types to sprinkle around the game. Along with a variety of stationary entities.

But, I also wanted to add a few more factions to fill the world. So I took the time to create a set of related creatures for the mountain cult and the frog people and expanded Ilana’s village. This also fed back into the gameplay, making it more worthwhile to expand the story towards certain areas with fuller character groups.

Then it was time for the talking characters, or, I guess you could call them inhabitants.

Merchants, story point characters, special encounters. There were a surprising number of these! Usually designed more as the story matured, such as the different versions of Aghor and even sculpting his father into the game.

And, every now and then I’d also create characters based on real world people as an expression of sorts. I guess I figure what’s the point of one person creating so much if it doesn’t reflect that person? But I’ll save the “why create” subject for another video.

Anyhow, during all these phases I always kept an eye on the creature balance.

While the design philosophy was to create a place, I still needed to make sure areas didn’t feel empty in terms of encounters. So I categorized each area with their creatures and just made sure to try to balance everything out. It’s nothing hard, just requires being a bit mindful about what you’re doing.

This all happened off and on while I was creating the world maps and doing other work for the game. Sometimes I’d find myself with a backlog of models that needed texturing….or that needed to be rigged and animated and rendered….so I’d do that for a bit before bouncing back into something else.

Like the maps, I found breaking up the monotony to be a good way to stay motivated and excited about the project.

Though, the very odd development timeline was a blessing and a curse to the entire process. While delays and changing focus onto projects like Labyrinth helped give me a chance to create more creatures (or use some previously scrapped creatures, like the blorb)….it also was fairly draining in terms of motivation… but in the end it seems like the game world is a lot more filled out than it would have been without the delays.

Overall, hopefully this gives you a general idea of how I tackled the creatures for Memories. Reading, experimenting, and letting whims of curiosity guide me….combined with just a lot of work to get it finished and into the game.

Anyhow, once all these surface subjects are out of the way I think it will be fun to dive into some of the deeper creative issues, so stay tuned for more videos and thanks for watching.

Hey everyone, I thought for this update it would be interesting to go over a more specific subject… and that’s the issue of publishers and funding.

Art of an Indie Game - Episode 3: The Plants

Hey everyone. In the last video I covered some of the creatures of Bloom, so this time let’s take a look at an easily missed part of the world….the...

So, when I began, I obviously I wanted to created a character like me in my game... and that's just what I did. Naming her Ilana.