As the sole survivor of a plane crash, free yourself from the mystical curse of the Lost Islands! With weapons as your tools and bullets as your shelter, craft turrets, landmines, freeze rays and an arsenal that would make a commando's knees weak!

The Lost Islands are the number one travel destination for Vikings, dinosaurs, crazed scientists and nocturnal ghouls, spread across scorching deserts, icy wastelands, and other equally fantastic environments.

Fight your way across the mystical islands in daylight, and survive the endless onslaught at night as you grow in power and upgrade your weapons with an unpredictable upgrade system; will your shotgun shoot two shells, or will it set fire to the enemy?

What are you waiting for? Book your flight today, and enjoy your stay on the Lost Islands!

Survive the endless onslaught of the night

Over 40 different weapons to craft

Over 20 different levels with special missions, unique environments and a colorful cast of enemies and bosses

A blocky art style redesigned to bring the style forward

A mysterious story unveiling the hidden truths of the Lost Islands

New Game+ letting you replay with your current level and weapons

Cooperative mode underway! Play with up to 4 friends and escape the Lost Islands together!

Destroy the enemy with a staggering arsenal as you experience the freedom to defeat your foes as you please! The combat has been designed to be quick and fluid, allowing fast movement for the player, wielding his chosen arsenal in his quest to destroy the opposition!

Create devastatingly fun combinations using your weapons to outwit and outfight the enemy. Freeze, blow up, set them on fire and turn them into an arrow pin cushion, the freedom is yours!

Why craft shelter and hide when you can craft weapons and thrive? Craft items like landmines, turrets, and armor as well as over 40 different types of weapons. Unlock new recipes by defeating the enemy or by exploring!

Over 20 different levels with varied climates and missions allow you to see a wide spectrum of environments. Find hidden chests and secrets strewn out throughout the game! Find the crafty Store Merchant hiding in each level to buy special recipes, materials, and weapon upgrades that may hold more than they appear!

Inter Pixel Arts is an independent mobile game studio taking its first steps onto PC. Block Survival: Legend of the Lost Islands is the result of experience over dozens of different games with millions of downloads on Android. The project is made by a team of six sentient beards with humans attached to them. The humans have no say in development and do as their beard overlords command.

Thanks for voting and helping Block Survival: Legend of the Lost Islands on it's quest to become the 2021 Indie of the Year. You are now in with a chance to score some free games. Help this game secure more votes by embedding the widget (or link) we have included below on your favorite sites.

We have been Greenlit! AWESOME! 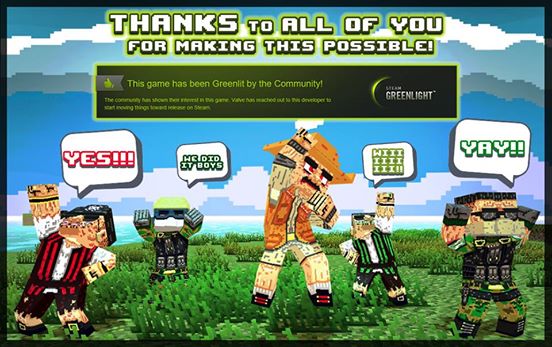 Before anything else is said, we would like to express our humble appreciation for all of you who helped us get greenlit! We are extremely overjoyed and humbled that people want to see this game on Steam.

We are all feeling full of joy and excitement, peppered with the motivation to deliver an amazing game to you guys. More than ever, we have a strong responsibility to prove those who voted for our game right, that our game deserves to be here due to its high quality and great design.

We are all gamers, and we know how much effort and love a bigger title like this needs and deserves. This is a result of countless of late nights, all nighters, coffee and ramen, and a healthy dose of crippling anxiety. Being greenlit is great for us to show that it has been worth it.

This game is an entirely new adventure for us, so we hope you'll have fun following us on this journey! We have a few things planned, so keep a close eye on the announcements!

Thank you from all the members of Team Beard and Inter Pixel Arts!

You can still check our game on GREENLIGHT for all latest news and updates!

We' re live on Steam Greenlight!

We are super thrilled to announce that the release is going to be soon!!