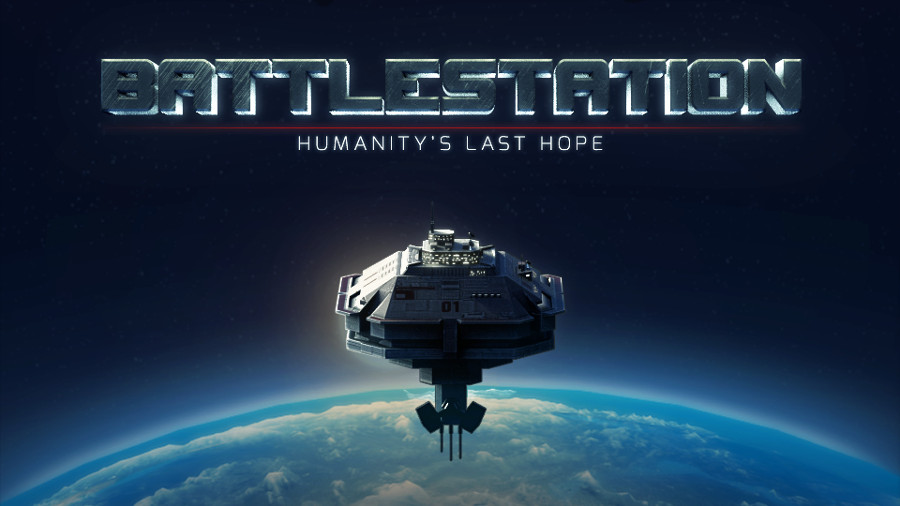 Battlestation – Humanity’s last hope is a sci-fi roguelike-like game with a rich and deep story , inspired by Babylon 5 and FTL. Immerse yourself in an alternate universe and take command of the newly built Battlestation, designed to be the last defense for earth against oncoming threat. Welcome to the Battlestation universe!

With every new game being a new story, Battlestation offers a new, fresh experience every time, driven by modern roguelike gameplay. All the features implemented in Battlestation give you many strategic options and a significant depth to the game for you to explore. 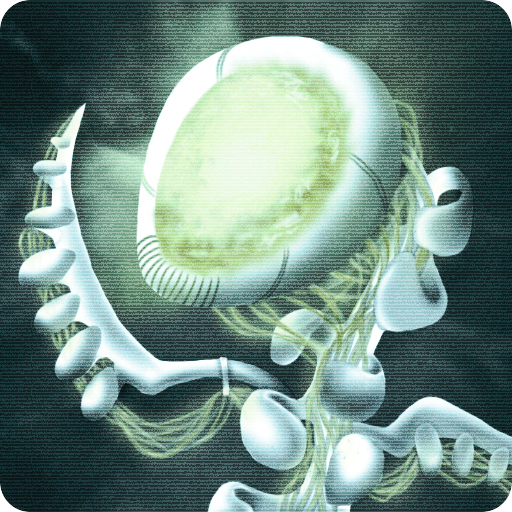 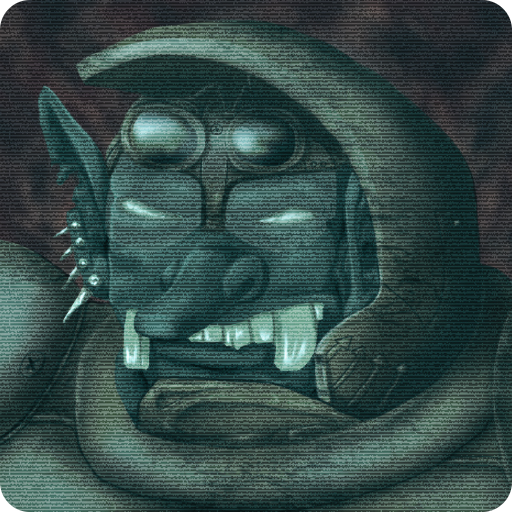 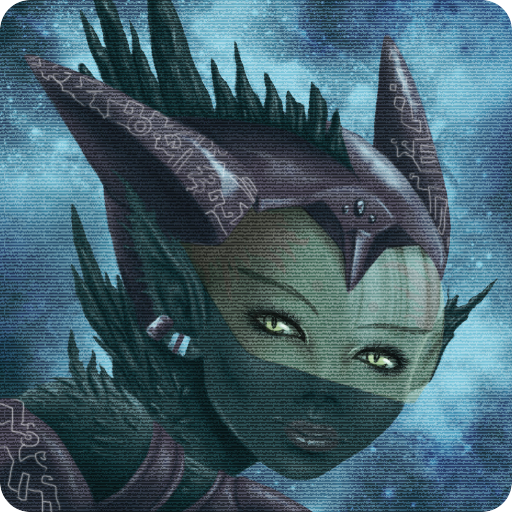 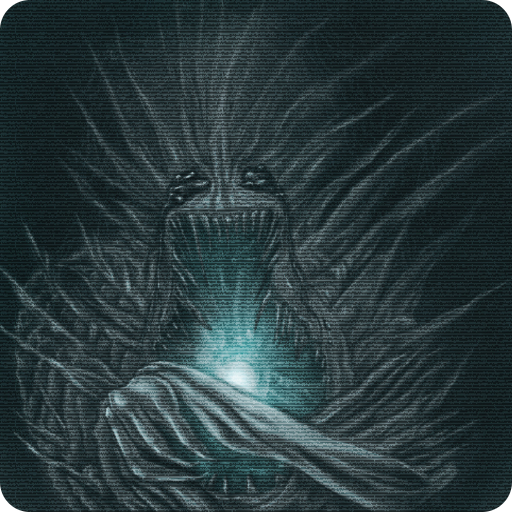 The Battlestation universe concists of 5 races in total, of which humans (The Player) is one. Besides humans Battlestation features following races: Celestials, Trolgars, Schillae and The Unknown Threat.

Since Battlestation is humanity’s last hope, the game obviously revolves around fighting and defending. Not only will you be defending against relentless attacks, but you will also lead away missions to investigate derelict ships, to discover new technology, to assist mining outposts, save crew in distress, deal with traps, and other unforeseen events.

The roguelike gameplay is present in Battlestation by giving you a surrounding that is ever changing. You are constantly exploring it and facing new situations not seen before. The core features of Battlestation have components designed to make the game roguelike, drive you to make quick decisions but also to plan for the long-term goal, to save humanity.

You never know what will greet you when a jump gate opens up near the Battlestation. Maybe it’s the Celestials coming this time. Maybe it’s the Unknown. Maybe the Schillae want your crew, specifically your male specimens, and you don’t want to give any.

The incoming enemy ships, events, mining outposts, derelict ships, availability of crew, finding crew on missions, discovering new technology, diplomatic encounters and more are all randomized for each new game. You can never rely on one single tactic to win you the game, you have to react to the events and make the right decisions to save humanity. 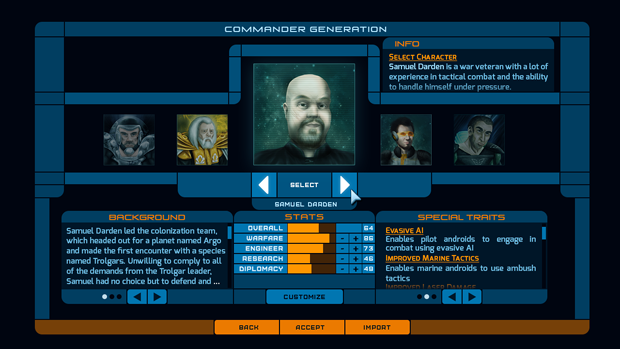 Inspired by character creation in Fallout, Mass Effect and Icewind Dale, Battlestation gives you the opportunity to create and develop the skills and personality of a true leader. The player has the freedom to set points to different character attributes, which will affect game play in various ways. Basically Battlestation gives the player the freedom to create his own commander character. Will he be a war veteran, researcher, engineer or a skilled diplomatic? There will be a set amount of total points available for the player to input in different categories. Current design also allows for level-ups of commanders, giving the player some progress after each game should the player die. 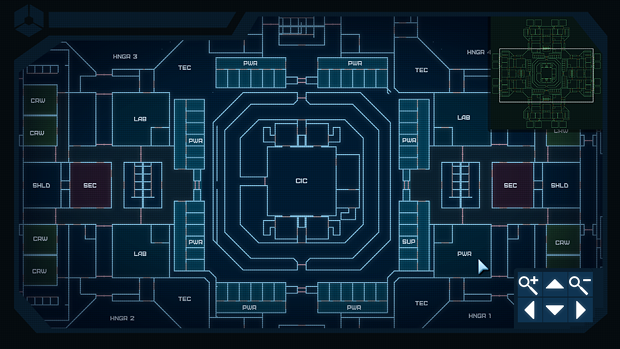 As the first commander of the specially built Battlestation you get to decide the layout. Order your engineer teams to build both standard facilities and special installations acquired through research or alien technology.

You can build: Hangars, Laboratories, Power generators, Sensors, Shield generators, Internal security stations. These have to be built by engineering teams. The impact of intrusions will directly be depending on the placement of different sections and where the intrusion happens to take place. E.g losing the shield facilities will cause the Battlestation shields to shut down. Marines can be placed to guard different sections. All of this will result in the player having to think about strategy both outside and inside the Battlestation.

Board enemy ships and defend from intruders 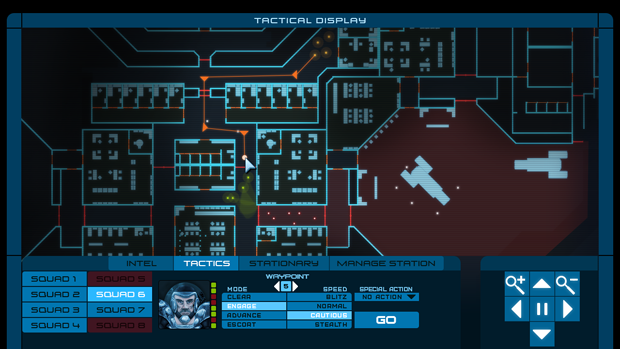 Taking a page out of the Alien trilogy and numerous episodes of your favorite scifi series, you can use your biological scanner to detect movement of your own troops and enemy infiltrators. Command your teams and battle inside the Battlestation, or aboard enemy ships. Take the fight from outer space into the inner areas of your Battlestation, as well as of alien ships.

Customize and lead your ships to victory 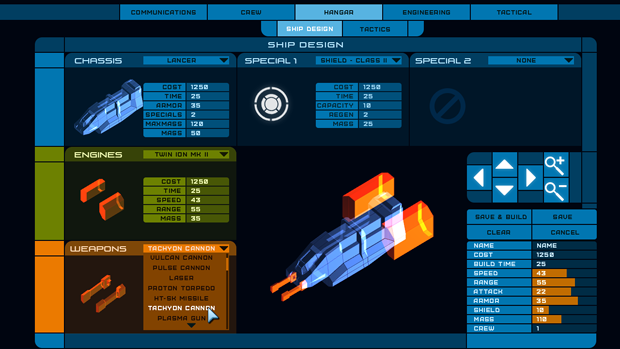 By constructing a hangar you can build ships, launching anything from fighters to freighters to dreadnoughts at the enemy. Inspired by Master of Orion 2, you can choose how to equip them, adding different types of hull, weapons, shield, transport pods, and more. New technologies and alien artifacts can make every ship even more unique.

Customizing ships bear some resemblance to Master of Orion 2, providing you with the ability to choose a hull, weapons, shields, transport pods and more to customize all of your ships. The larger the ship the more it has space, the more damage it can inflict and take on. The drawbacks for a huge ship are cost and speed. Battlestation gives you the ability to create ships using your imagination, from small fighters to massive battleships. 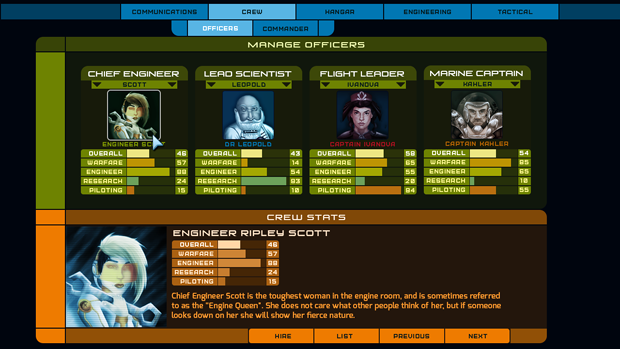 Both your Battlestation and your ships need able officers to run them. Just like in hit games like Jagged Alliance, you can recruit a wide range of characters to manage engineering, research, piloting and tactical squads. Each officer adds a bonus and special abilities to the equipment and drones that you control. Your progress and the story that you tell through your actions dictate the availability of officers, making them that much more valuable to you when they appear. 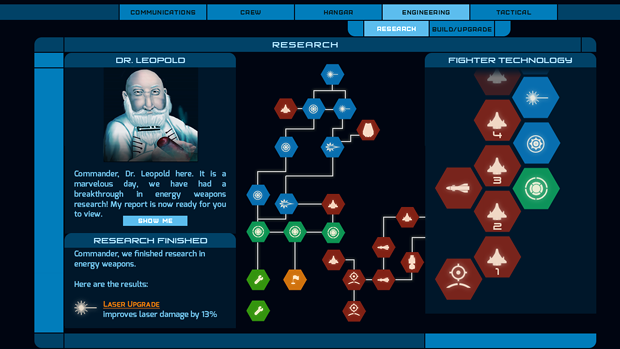 Humans have always reached for the stars, always pushing the technological frontier. Battlestation comes with a standard human technology tree, enriched by alien artifacts and technologies. These alien technologies may open up entirely new branches of science, leading to even more unique gameplay.

Negotiate with other races 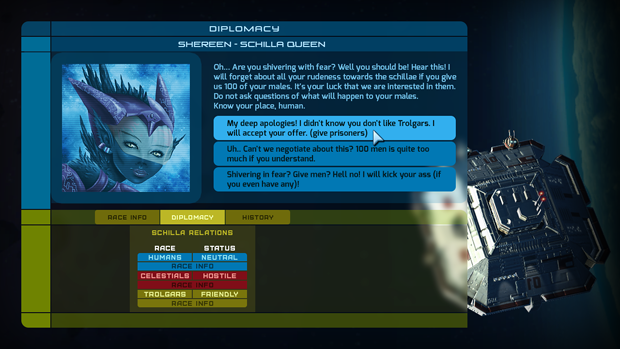 Battlestation introduces you to new races and provides for a wide range of possible diplomatic negotiations. Demands and offers will be made from both sides and you, as a commander, have the power to decide if you want to keep the relationship friendly or not. Your decisions will affect the story, producing different costs and benefits in keeping the aliens happy or not; and if they are not and everything goes to hell, call for reinforcements.

We've been busy all summer driving Battlestation: Humanity's Last Hope forward and preparing for a new Kickstarter. We have also developed a new Battlestation game on the side, called Battlestation: Harbinger. Initially we intended to publish only for mobiles but now that our engine supports PC as well we have submitted the game to Steam Greenlight and passed! Watch the trailer below:

Battlestation: Harbinger is a mix of turn based star map strategy and real-time space battles. Take command of a space ship in this epic sci-fi space adventure game, combining the game play of games like Faster Than Light, Out There and other space operas. With every new game being a new story, Battlestation: Harbinger offers a new, fresh experience every time, driven by modern roguelike gameplay. All the features implemented in Battlestation: Harbinger give you many strategic options and a significant depth to the game for you to explore. Experience the intense atmosphere of adventuring deep into space and trying to save the human race.

We also made an epic video of us preparing for August 13th. Every indie game developer deserves one, this game develoment thing is no walk in the park commanders!

We will return with the live Kickstarter! Be sure to register at to be the first one to play new Battlestation games: Battlestation.fi

We also have a Thunderclap campaign running and we would appreciate your help immensely:

This is Admiral Geezer logging out.

Teaser pictures of the new upcoming Kickstarter and mobile game.

Apologies for being a little quiet lately, but take comfort in knowing that we have put all of our time to develop the new mobile game, the PC game and...

Battlestation: Humanity's Last Hope has been greenlit by Steam.

Battlestation: Humanity's Last Hope has been greenlit by Steam and news of a new upcoming Battlestation mobile game.

Battlestation – Humanity’s last hope is a sci-fi roguelike game with a rich and deep story , inspired by Babylon 5 and FTL. The first trailer of Battlestation...

First screenshot from the upcoming trailer for Battlestation.

Hello fellow indieDB developers and gamers! We are truly happy to present you with a Kickstarter for Battlestation. Head on over to: Kickstarter.com

Let us know what you think! All feedback is very welcome. Have a great weekend everyone.