Since its launch in 1996 The Neverhood's heartfelt comedy and unique artistic style has continued to win the hearts of fans around the globe, creating one of gaming's most long lasting and dedicated followings. Through the successful efforts by many of such fans, this game was funded via kickstarter on June 22, 2013. Fans will once again get what they have been dreaming about for years and that is to immerse themselves in another world made of clay. Some have likened this new game as The Neverhood's "spiritual successor" - a clay and puppet animated adventure game called ARMIKROG.

The founders of Pencil Test Studios, Mike Dietz and Ed Schofield (also from Earthworm Jim and The Neverhood), have reassembled much of the original Neverhood team to develop ARMIKROG using the Unity engine for PC, MAC and LINUX. In addition, they'll also be using puppet fabricators, sculptors, animators and lots and lots of clay! The team had set a goal of US$900,000.00 through crowd funding site Kickstarter and the fans responded. "While our funding goal is considerably less than The Neverhood cost to produce in 1997, it is still our biggest hurdle, " said TenNapel. " We'll be using many of the same animation, modelling, sculpting, set building and clay & puppet fabrication methods we've used before-keeping the overall game design scalable so that we can create a fun and exciting experience within our targeted funding goal, but still have the flexibility to expand, should the opportunity present itself. "ARMIKROG will be DRM-free for PC (WINDOWS), MAC OSX, Nintendo WiiU and LINUX, and available through a variety of digital distribution sites.

Though Armikrog was successfully funded on Kickstarter, but you can still pick up copies of the game at:
Armikrog.com

As many people had issue with amazon or were unable to secure the financing before the end of kickstarter, we are now offering payments via paypal. These levels can be found on armikrog.com, but will be offered in a limited supply, so act fast. I must emphasize that you must act fast on these paypal - post kickstarter tiers as they are limited supply and once they run out, they are gone. Tell your friends, your neighbors and strangers online.

Hi Armikroggers!Another unbelievable day yesterday. I’m just blown away by the generosity and the determination of our backers. I have to admit, as...

Today I'd like to spotlight another one of the many talented individuals working behind the scenes on Armikrog, this time the uber-talented sound designer...

We also have some GREAT news to announce! After hearing the requests of our international friends, Armikrog will now be localized in French, Italian...

Mike and Ed are going to be at E3 this week walking around the floor with an authentic Tommynaut puppet which will be used in the game. They will be handing...

Please spread the word about the voting for indie game of the year. The exposure would be phenomenal for the game.

Funding is picking up again; I predict this project is going to be a photo finish but hopefully will still make it

What a great finish that was! Now Wii U needs to be added to the Platforms list...

I've backed $900 into this project. Come on guys, let's all make this happen! Seize the Klay!

awesome Guest. We gotta keep spreading the noise about this game!

You Got This! Seize the Clay!

Great to see the support here. Continue to spread the word. Talk to friends and inspire them to support Armikrog by sending some dollars. If not funded, they won´t lose any money, and if funded we are all winners! Keep up the good word!

agreed inkan. no wiser words could be spoken! 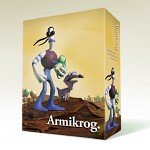