Arclands is an RPG inspired city builder. Create a buzzing village and become a powerful enough wizard to defend it!

Arclands, a 2D city-building RTS RPG is over 65% funded with 7 days left!

Arclands is a game about creating a buzzing village and becoming a powerful enough wizard to defend it.

Build a settlement, keep your citizens happy and explore the treacherous wilds in this RPG-lite city builder. Inspired by hero driven RTSs and RPGs of yore.

You're a wizard who got banished from their home because they rivaled the ruling wizard in power. What you gonna do, that's wizard rule right there. Banished citizens are sent to the Arclands - a treacherous collection of islands inhabited by monsters which are attracted to everything magic. That's bad for you and your followers, so the only way to survive is to grow and fortify your village. You will see it grow from a loose collection of rugged tents to a heavily fortified city, attract other banished refugees and discover the secrets of the Arclands.

Akin to classic RTS games you can build structures and your citizens will start working on them. Provide your citizens with a comfy place to sleep, build flower beds or taverns to keep them happy and occupied in their free time. Secure your city with walls and a vast selection of traps and towers.

Place a building and your citizens will soon start working on it.

Ensure your economy is thriving - Build farms, forester sheds and mines to ensure a constant flow of resources. Eliminate bottlenecks in your supply chain. Keep an eye on your citizens and what you can do to make them more productive.

Make sure your citizens stay productive by keeping them happy - assign them a job, a place to live and tend to their needs. Your most basic workers don't need much but a warm place and basic food - once you get further into the game though you'll find you want to attract very special citizen which might need more specialized care.

If you ever get stuck on how to improve your city, you might want to check out your journal.

Whenever you start a new settlement you end up on a randomly generated island of the Arclands. When you're feeling brave enough you can gather some of your soldiers and venture out of your village - you'll come across abandoned settlements, deep forests and magical ruins. All filled with enemies, resources and magical treasure alike. It's worth it, but it's also dangerous.

Venturing out into the Arclands is dangerous but worth it.

When your settlement grows you'll attract more and more unwanted attention which needs to be taken care of. Control your citizens in a typical RTS-like fashion to defend your city. Your main character can learn powerful spells by either leveling up or discovering ancient knowledge in the Arclands.

Arclands controls pretty much like a standard RTS, but akin to it's biggest influences, you also have an avatar - a unit which you can control, level up and customize. Your avatar is persistent - meaning that your Wizard carries over to every new town you start. If your town gets destroyed, you can still scavenge some of your claimed resources, take your favorite citizens with you and start anew. This guarantees a steady progression in the game and speeds up the early game, if you so desire. If you want to know more check out update #3 - it's about character creation and progression!

You can choose between many different primary colors - some have to be unlocked though!

Artifacts are the rarest kind of treasure hidden in the Arclands. These relicts of unknown origin channel different powers when displayed on an altar. Build different kinds of altars and place your artifacts on them - you'll be suprised what they do. Some fire lightning bolts at your enemies, some may turn your citizens into sheep and some may grow lots of trees around them! You can learn more reading update #9!

This idol increases the speed with which sorrounding crops grow.

The deeper you delve into the Arclands, you'll find more and more other living beings which are not out to harm you. You can befriend some of them and convince them to join your village - if you can tend to their requirements.

Currently the game is at a pre-alpha stage. The basic game mechanics are implemented and working. A very bare bones prototype exists. After I implemented the missing systems (that weren't super integral to the prototype, such as character creation) the next goal is to polish and balance the existing game systems and add content. I am planning to release Arclands in Q1 2023.

Character creation will allow you to customize your avatar. You can change haircut, beard, eyes, eyebrows, nose, ears, mouth and various colors! 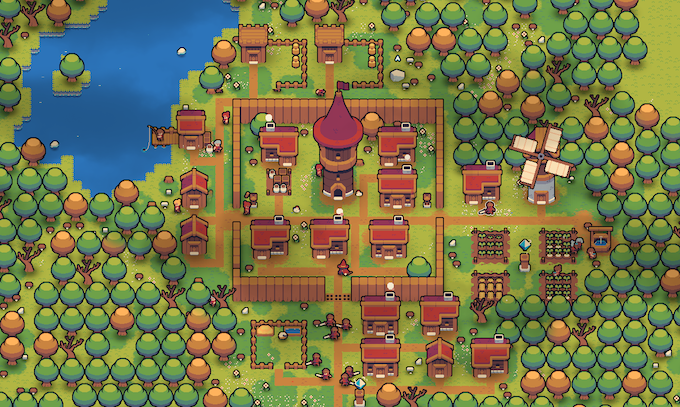 You will be able to grow your measly settlement to a mighty city.

Video games are, among other things, escapism. Growing up I loved getting lost in RPGs and I’m sure many of you did as well. One thing that always felt special to me, were all the little towns scattered across the vast, dangerous lands I was exploring. These towns and spaces have always fascinated me - which is why I also developed a taste for city building / strategy games like Stronghold, Settlers and Warcraft. These games captured my imagination like no other - but one element was missing. While it was fun building castles and towns, you were never really anchored in the world you were building in. You could explore the map but there never were any surprises hidden. There were no little storylines unfolding. There were no boss fights you could stumble upon. There was no life - Maps in these games always just were a thinly veiled abstract canvas, nothing more. I want Arclands to feel more like a space that promotes wonder and curiosity. If you want to read more about my inspirations check out update #4!

People are asking for a way to easily get additional copies of Arclands - that's why this Campaign now offers add-ons.

Please be aware that not all add-ons are combinable with all tiers - check this graphic for details.

How to get an add-on?

Simply navigate to "manage your pledge" on the top of the screen and increase the "pledge amount" by the total cost of the add-ons you set your eyes on. When the Kickstarter is over you will receive a survey to specify what add-on you pledged for!

You already got a taste of the Arclands OST in the trailer of course - I'm really happy that I can share one more track with you created by the fantastic Adam Bow (Swordcery, Death and Taxes). Since Arclands isn't really a retro-game but evokes memories of such titles, we decided that the score should both incorporate both modern and 8-bit sounds. I'm really loving the results so far and I think you will too. I'm looking forward to what Adam will create for Arclands once we go into full-fledged production!

Some backer tiers will provide you with an digital PDF artbook of Arclands. This book will feature official concept art, pixel art and different behind-the-scenes and making-of information. I will also explain my process behind creating pixel art - it will be a great source of inspiration for all game art lovers out there. The artbook will launch approximately one month after the game.

I know I wouldn't be running this Kickstarter if people didn't share their work when I was getting started with pixel art. It is my greatest hope that Arclands assets help people to learn more about this medium and get more people into making pixel art themselves. That's why I will release all graphical assets I made for the game under a CC BY 4.0 license if the Arclands Kickstarter is successful. That means that you can distribute, remix, adapt, and build upon the material in any medium or format with credit, even for commercial purposes. The sprites will be released over a period of time in neat little themed packs.

This is were you can contact or follow me and stay up to date on Arclands development!

My name is Jon Keller and I'm a 26 year old guy from Germany. I've been working as a freelance web designer/developer for about 6 years now and am making games as a hobby for more than 8 years. I also make music sometimes. My experience in visual work, audio work and programming helps me tackling Arclands as a solo developer.

Arclands is the first project I believe may be interesting to enough of you to be commercially viable. This Kickstarter is my attempt at finding that out - If it succeeds I'll have the funds to produce the game. If this Kickstarter fails, I sadly can't afford to finish it.