A real-time strategy game where you design airships and then fight with them. The aim is to have pretty chaotic explodey fights and interesting ship design choices.
Forums — Twitter — Site

Purchase includes future versions up to 1.0!

At its core, the game is about designing airships and fighting with them. Ships are put together out of modules, and the layout of modules matters a great deal: everything on board is done by individual airsailors who need to run around, ferrying coal, ammunition, water and repair tools - and sometimes their fallen comrades.

You can command fleets of airships both against the computer and against other players across the Internet.

In addition, there is a single-player strategic mode, where you use your fleet to conquer city after city, unlocking new modules and bonuses with each of them.

The game has an authentic-ish system of heraldry where you can create your own coat of arms, and register it with the game forums as unique to you.

I've written a lot about the upcoming diplomacy update for Airships, but have so far refused to commit to a release date. Estimating how long software takes to write is hard, and I didn't want to produce a string of broken promises. Now I'm finally close enough to everything being ready that I can do so:

The diplomacy update will come out in August 2022. It's tentatively called "Airships: Conquer Together".

So that's in about five months, nicely two years after the 1.0 release. It will be a free update revamping conquest mode and adding a large number of features. A more financially savvy person would be selling this as an expansion pack or calling it "Airships 2". But it's free, because it's where I want the game to be at. After the release, any future major features will come in the form of expansion packs.

Why another five months? I want to make sure I have enough time to test, polish, and balance the game. 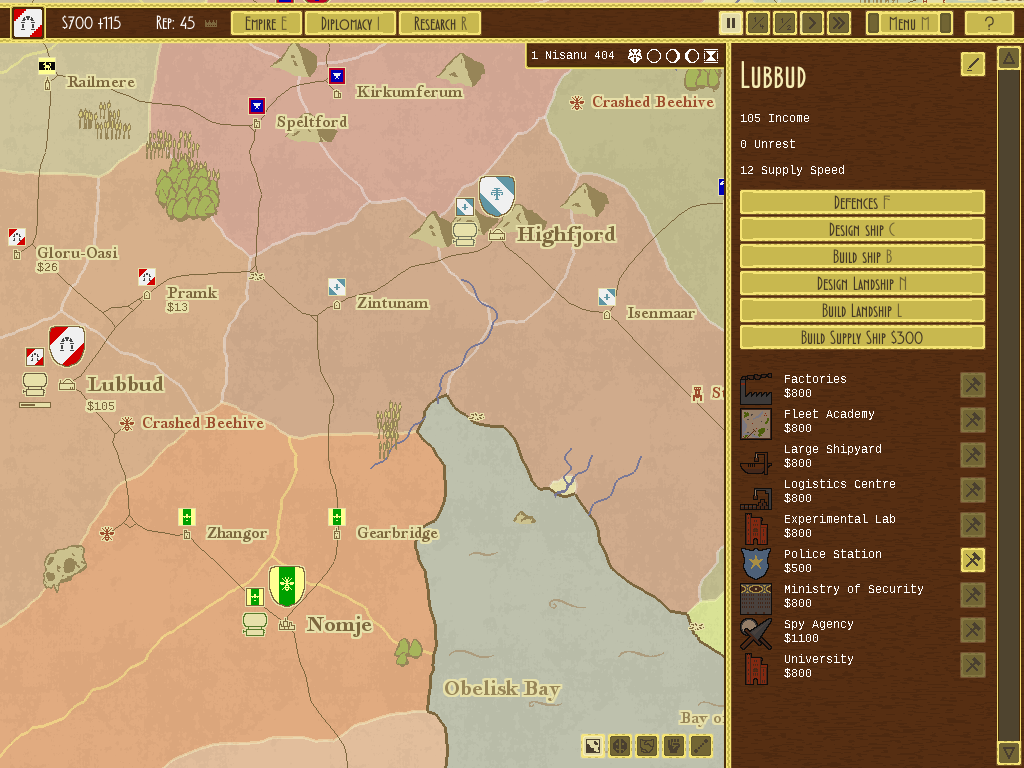 What does the update contain?

Co-op combat and conquest: You will be able to fight with any number of players and AIs to each side, each controlling your own ships. You can set up individual multiplayer combats with multiple players on both sides. And if you're allied in multiplayer conquest mode, you can fight alongside each other.

Full diplomatic system: You can conduct diplomacy to determine war, peace, and a number of levels of alliance and cooperation. You can send ultimatums to demand diplomatic concessions. And the AI is able to do all of this too, including a detailed numerical explanation for why it accepts or rejects a deal.

City upgrades: You can now upgrade your towns and cities with shipyards, factories, police stations, pleasure palaces, labs, and more. Balance your expenditures between building up your empire and conquering more of it.

World ages: As the game progresses, the world enters different ages that change the rules and balance of the game. An age of storms can make it harder for airships to navigate. An age of piety will see empires racing to control holy sites. An age of exploration lets you send out your ships to seek out strange new lifeforms to study and, er, plunder.

Fleet supply system: Logistics are a very important part of warfare. Yes, you can still assemble a doom stack of dozens of ships, but it will be a lot more cumbersome than a careful deployment of forces.

Reputation system: Breaking treaties and committing atrocities will decrease your standing, while defeating pirates and slaughtering monsters increases it.

New additional victory conditions: Instead of conquering every city, you can also amass enough power and reputation to have yourself declared emperor - though other players may interfere with your coronation going ahead. Or you can forge an alliance strong enough to dominate the world. Or, if you're a cultist, you can make worms erupt from everyone's eyes. That's a kind of victory, too.

A prettier map: Inspired by renaissance maps, featuring landmarks and marginalia drawings, and a clearer presentation of information.

Revamped tech tree: Based on player feedback, and adding in new technologies for city upgrades.

Revamped coat of arms bonuses: Also based on player feedback, and taking advantage of the new features in the game.

Various other balance and user interface improvements: Too many to number here individually. 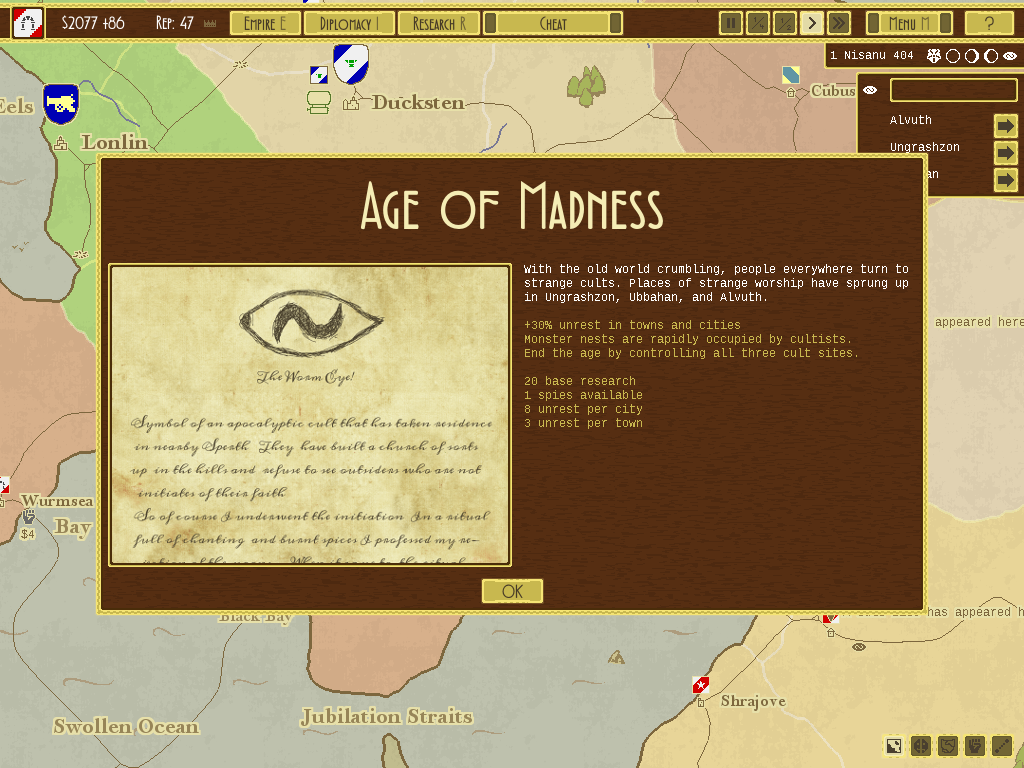 So what's left to do in those five months?

Networking: This is the big show-stopper right now. Multiplayer games still have weird lag problems and failures. I really really really want to fix those before releasing an update that's about co-op combat and diplomacy. So right now, I'm doing regular test games and updates to figure out those problems and fix them. If you have had network problems with the game such as crashes or failed reconnects, please get in touch and volunteer for those test games, so I can figure out what's wrong.

Refining AI logic and performance: The new AI code for diplomacy is mostly complete now, but it simply needs more testing as well as some performance enhancements. Turns out that considering every single treaty you could sign with every single other empire in the game is kind of time-consuming!

Updating tutorials: Because the game - and especially conquest - has changed, I need to update the tutorials. As an existing player, you may not care about this, but the game needs to be accessible to new players as well.

User experience polish: With all those new features come a lot more user interfaces that have to be made usable.

Testing and balancing: Finally, an update this big simply requires a lot of testing to make sure it actually works and is reasonably balanced! There will probably be a closed beta followed by an open beta in the months leading up to the release.

And a hundred other small things. :) 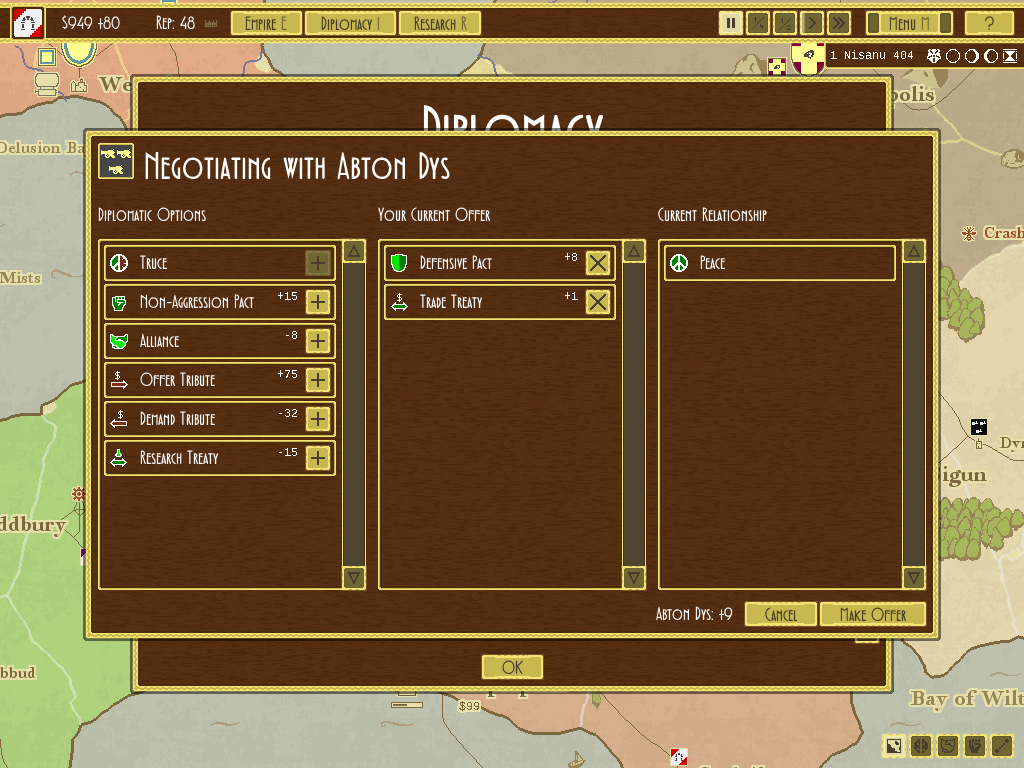 Diplomacy in most strategy games is kind of... meh. Here's how I hope to do better.

Rundown of a weird and stupid bug I found and fixed in the game's combat AI.

Airships: Conquer the Skies is complete!

After five years of dev, my steampunk shipbuilding RTS has launched.

The future has finally arrived. Conquer The Future v0.01 Pre-Alpha doesn't provide much, but enough to take a look; including Audio, Visual, Photoshopual...

somebody should make a lets play where its one city defence get money and build defences only i want to see how that will play out.

Looks like a whole lot of fun...and chaos. Definitely tracking this!

Great idea - keeping an eye on this :)

I love this game soooo much! HAHAHAH!

Are you planning on adding a map for Multiplayer? I have friends getting the game. Although it looks like they are waiting for another option besides paypal to pay with. .

The issue with making a MP map is that combats and strategy work at different timescales, so you'd spend a lot of time waiting for other peoples' fights. Not sure how to fix that.

Re: PayPal - what kind of payment method would they like? I totally understand that it's not exactly everyone's first choice. Am up for anything, including stuffing money into an envelope. :P

Great game. I've been playing since Dev2 and it gets better each time. It's a steal for only $5. Reminds me of the Total War games with it's campaign map.