Al Emmo and the Lost Dutchman's Mine

Join feeble, middle-aged Easterner, Al Emmo, on his journey into the heart of the Wild-West in search of love, adventure, and inconceivable wealth! But is Al really cut out to be a cowboy? A rival stranger in town and a looming thousand-year-old Aztec curse are bound to keep Al on his toes. Does redemption lie within the haunted depths of the Lost Dutchman's Mine? And is Al brave enough to enter? Find out in Himalaya Studios' Wild Western, Sierra-style adventure game!

Al Emmo and the Lost Dutchman's Mine version 4.0 has been released! This new version has several major improvements based on player feedback we've received over the years. If you've never played the game before, now is the perfect opportunity to give this enhanced edition a try! 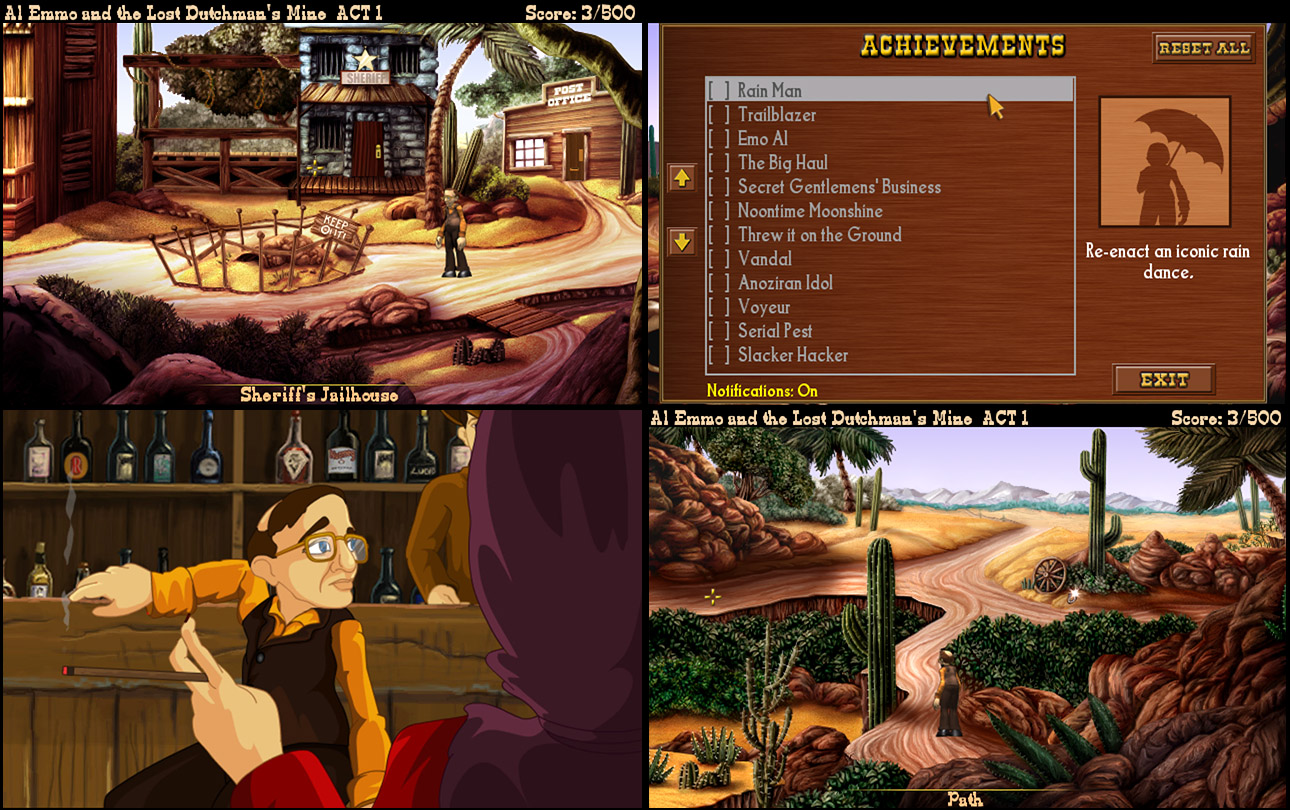 AVAILABILITY ON STEAM
The game is still in Greenlight, but is moving up. If you have a Steam account, we'd really appreciate your "Yes" vote. And if you leave a comment too, you'll automatically go into our prize draw to win some free Steam games once greenlit! Also, all owners of the game will get a Steam key.

CHANGES TO VERSION 4.0
Check the v4.0 Changelog to see a full list of changes to the enhanced edition.

We're looking for a handful of beta testers for Al Emmo v4.0 on Windows & Android!

Al Emmo and the Lost Dutchman's Mine on Desura!

Join feeble, middle-aged Easterner, Al Emmo, on his journey into the heart of the Wild-West!

Al Emmo and the Lost Dutchman's Mine Game/Demo

This is both the Demo and Full Version of of Al Emmo and the Lost Dutchman's Mine in one file. The demo has a one-hour time limit which can be removed...

Al Emmo and the Lost Dutchman's Mine, a witty western with a healthy dose of adventure, follows in the tradition of classic adventure gaming.

Hi, I bought this game directly from developer some months ago. Is it possible to get it also on Desura?

Sure, if you have it installed, Desura will link it to your account, Go - File (Desura logo, left upper corner) - Tools - Find/ Add Games Installed

Interesting but the narration in the trailer had lots of background noise and wasn't well voiced I hope that isn't in the game.

Trailer has now been fixed and a revised version has been uploaded for the new and improved Enhanced Edition of Al Emmo.

Twitter
Tags
Embed Buttons
Link to Al Emmo and the Lost Dutchman's Mine by selecting a button and using the embed code provided more...