AirBuccaneers is a Co-operative Vehicle based Team Deathmatch game with fierce aerial battles between the Buccaneers and the Vikings in beautiful Scandinavian landscapes. Players assume the roles of Buccaneers and Vikings and fly around the skies with their heavily armed hot air balloons in squad based combat that demands seamless teamwork and co-operation. The game has been heavily inspired by the Finnish national epic Kalevala and the Nordic Viking mythology. This isn't basic run-and-gun FPS game: The cannons need to be loaded, aimed and ignited, the airships are hard to steer and the winds are fickle, and lone warrior in general is pretty much useless. The goal of the game is to take down enemy airships or dominating a marked point in the map instead of killing other players. AirBuccaneers emphasizes teamwork and co-operation and follows the 4Co ideology that's in the core of LudoCraft's team building serious games: Communication, Coordination, Co-operation and Collaboration.

AirBuccaneers Devs went to battle against the winning team of Vectorama 2012 AirBuccaneers Tournament. And lost. Brutally.

On the misty night of last Friday, the August 17th, we engaged on a valiant battle against the winning team of Vectorama AirBuccaneers HD Tournament. The Byrz’s Team, like they called themselves, wiped the floors with us regardless of our gallant efforts to fend off their nefarious Viking horde. These are the faces of the magnificent bastards who wrought havoc among our ranks on our own land. 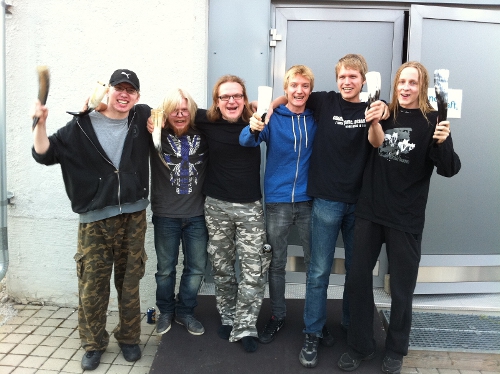 The winning team was awarded with authentic drinking horns and a chance to get their voices into the game.

Congratulations to the winners and thanks for a great fight!
Our Boss, Tony, wasn’t too happy when we mustered up enough courage to tell him of our loss: