-:Description:-
Inspired by such games as Castlevania and Ninja Gaiden; aftermath is a NES styled action platformer. However in Aftermath you play as a dog. You must run, jump, and dodge your way through 8 levels to recover your beloved owner. All the while also trying to fend off thugs, bandits, henchmen, and mutants. Explore the world left behind the destruction brought on by Y2K.
Features:

January 1st, 2000 all of the world's computers ceased to operate. This event is known as Y2K. As a result banking operations were shutdown, electrical power grids also ceased operations. The world quickly spiraled into chaos. A world war broke out and soon to follow was all out nuclear warfare. The result left the earth decimated as well as most of its population. For those left there was still the problem of radiation. However a chemical was released in the air. It drastically reduced the levels of radiation, but it came with a side effect. DNA of all species began to mutate leaving behind monstrosities.

It is now the year 2102 and you are a dog named Dash. Your owner (Dr. Finch) is a Medical Doctor. On a scavanging trip in an attempt to create much needed medicine, She is kidnapped while you are asleep. When you awake all you are left with is the trace scent of your master. You must track her down and save her!

So recently my PC decided that it didn’t want to not freeze after 10 minutes all the time. Meaning, I’ve been troubleshooting for the past week or so. This PC with my game project files. Thus I had to preform a search and rescue and transfer the project files to a computer I COULD work on. Luckily I’ve been saving up for a Surface recently as I’ve wanted something light that I could take with me anywhere, but would also be able to handle game development. At least in a 2D capacity. However I still had no usable PC for a week. So I was a bit behind, however I’ve been making progress ahead of schedule so… maybe it’ll balance out? Who knows. I thought this game would be a 3 month for fun project. So what do I know?

Anyways, I’ve added more music to the game composed by my homeboy Jesse. They’re some pretty good tracks and they fit in nicely with the game. Along with that I’ve fixed some collision issues and made a major design change. I’ve decided to remove player-enemy collision. I originally had some enemies that would collide with the player and others would not. In the end I feel that it’s really not fair to have had player essentially guess whether a new enemy would be passable or stop them in their tracks. So I either had to give all the enemies collision, or give none of the enemies collision, or make some way of signalling the player that an enemy had collision or not. In the end I felt no collision would be better for this game.

A simple solution for a simple game. 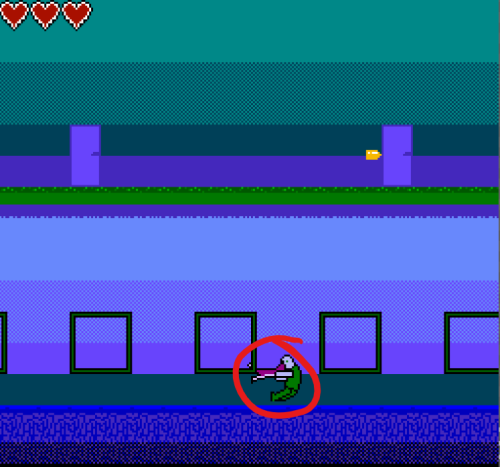 Of coarse that left an issue of just letting players run through enemies without consequence. This is usually resolved by making the player take damage for touching the enemy, However I never really liked that in games, always seemed cheap to me. Furthermore, in Aftermath as a dog you need to lunge forward to attack and thus the player sprite will need to touch the enemy for the game to register a hit. I think it’d be confusing to basically tell players that in order to defeat enemies you have to touch them, but you take damage if you touch them, well except for if your attacking. Not to mention the technical side of figuring out i-frames and collision with enemies with more than 1 hp.

So instead of doing all that I instead just adjusted enemies attack timing so that if one were to attempt to just run through an enemy that enemy would be able to get a hit off. A positive is that the enemy encounters feel a lot more snappy. Overall I’m very satisfied with the results and new direction and I think ya’ll will be too. :D

Hello, First of all, thanks for checking out Aftermath. I hope you're enjoing it. If you have any feedback feel free to leave a comment here or shoot...

-:Description:- Inspired by such games as Castlevania and Ninja Gaiden; aftermath is a NES styled action platformer. However in Aftermath you play as...