After many months of studying and researching old scriptures from different sources, both official and fan-made, we have created a compendium of Etherian lore. Warlords and warladies, today we would like to present the knowledge we gained about the Swarm race. 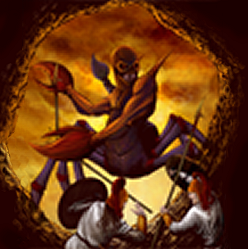 From the dunes of the far west, mere insects, bugs and worms scoured the hot sand and dwelled in muck-filled fens, content to live, breed and die. Their presence formed the foundation of the food chain and very much supported all life in the desert. Any kind of morality is lost on them, for they are as natural as the land they live on. As would be expected with some of the tiniest forms of life, the creatures are ignored by animals much larger than themselves. From the innocence of insects, the darkest and emptiest desires were plucked by the voice of all hunger and corrupted into terrible evil. It was two years after the Sundering when Melkor, the dark god of famine, descended upon the realms of the Jha’Lira river and upon doing so turned all food and water into dust. With the spirit gods of the ancient Kheri Empire he did contest, devouring them one by one and turning many others into its deathless servants. Plagues of locusts and swarms of flesh-eating scarabs, with an endless lust consuming them, blotted out the dunes. From these ranks rose Melkor’s most feared servants, the daemonic Scartauri. Mutated into the image of man, these giant scorpion warriors were created with brutish strength and terrifying intellect. All of the Kheri Empire became theirs, and in these crumbling ruins and ancient tombs they do dwell, a mockery of the once verdant land they now inhabit. Even in death, the embalmed Kheri are bound to scartauri priests or spirit gods, serving the very creatures which destroyed their empire or defected against them. Henceforth, the western wastes became known as the Realms of Famine, a dead, lifeless and greatly feared place where nothing exists but eternal hunger.

Whether overground or underground, all manner of monstrous arthropods make their homes in towering hives or ancient halls, covered by the desert. Every chamber in each nest is dedicated to a different function, from food or water storage to birthing chambers filled with eggs. Lesser insectfolk are employed to gather materials & supplies, repair more complex stonework and work forges while the superior caste of scartauri are soldiers and guards only. There is no custom or manner in which the monsters of the dunes devour their scarce food, rather they consume with animalistic glee, one of few emotions which these creatures remember of their former selves. Occasionally, when Melkor’s control is diminished, the swarmfolk, unable to restrain their insatiable hunger, will even eat each other. Some swarmfolk eggs hatch incredibly fast, especially when food is present near the clutch. Many monsters lay their eggs directly on their victims while others still hatch them from within egg sacks surrounding their body.

It is said that the legions of Melkor are without end and that the greatest scartauri possess horrible powers over magic. Such scartauri are rulers of the Realms of Famine, above all but the god spirits and Melkor itself. With their strength, they are capable of fighting some of Etheria’s strongest opponents, and with their intellect they can also outwit them. Unlike other insect monsters, which are dominated by a single thought, scartauri are divisive, manipulative and often aggressive creatures that have both discipline and creativity. Their hierarchy is determined by both strength and intellect, praising above all the ability to deceive. Magical advancements and artifacts are made by those with access to the gift of magic, aided by foul sorcery and unholy rites. But in the land of hunger, there is little culture, only the steady progress of decay and thirst for blood.

With no contention, the Realms of Famine belong almost entirely to Melkor’s swarm. Each region is controlled by a different sect of monsters, from the sandworms of Devorax to the scartauri citadels of Arthreign through the wasp, scorpion and scarab infested Sleepless Sea. Dust Devils, daemon spirits conjured by Melkor and its priests, are a figurative omen. Their coming signals a sandstorm, though whether controlled by Melkor or not none can say. The most vicious of these storms are rumoured to consist of dying Dust Devils and can suffocate any living thing bar some of the dark god’s beasts. Should they be withstood, these unnatural storms normally break on the Wild and Al-Diraq Mountains, but some can persist across Bortzovia and even reach the Isle of Dawn. In all the lands, the only signs of natural life are located entirely on the outskirts, such as the Al’Jhira Oasis and S’Aliah Clearwaters - the two tributaries which once made up the life-giving river, Jha’Lira. In these areas, the vast hordes of Melkor meet with the battle-hardened descendants of the Kheri and Diraqine enforcers. Every week, at least one wave of monsters assails the forested oases, though most of the time these attacks are disorganised. It is fortunate for the folk of the west that Melkor and his greatest servants seem content to remain passive. Were they to assemble, much of the Wild Coast and beyond would be plunged into a hideous world of empty desire.

Nice backstory for the Scartaurii, they were woefully undeveloped.
It is also fitting to the Warhammer-lite nature of Warlords, that the desert kingdom used to be called Kheri (Khemri in Warhammer).