After many months of studying and researching old scriptures from different sources, both official and fan-made, we have created a compendium of Etherian lore. Warlords and warladies, today we would like to present the knowledge we gained about the Ssrathi race. 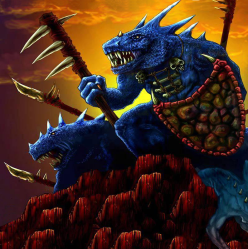 Within the thick, humid jungles of the southern continent roam the ssrathi. Keshan, their homeland, is a comparatively ancient, prehistoric world separated from the rest of Etheria. Most of the land is covered in vast swatches of tropical forest, intersected by sprawling rivers and dominated by large mountains and volcanoes. To the east, the thriving, green slopes of the Ayauhtic Tetepe Mountains exude clouds of mist, covering the valleys in a pall of dew. To the west, the bug-ridden Zoquitic Marshland and the Cuetzpali Basin make for incredibly fertile hunting grounds. No matter where, Keshan is an unequivocally harsh, warm environment in which the ssrathi prosper.

With dinosaurs roaming the southern continent, snakemen have to be both tough and lithe, being able to withstand blows that could be fatal for other races and dart through trees as fast as elves. Unlike almost any other race of Etheria, they are a mix of both tribal and civilized peoples supported by a hierarchy of expert hunters, farmers, craftsmen and warriors. This variety is akin to their own physical diversity - some ssrathi are large, hulking creatures while others smaller and thinner than a dwarf. Those who are larger tend to be given more respect and can become warriors, hunters or builders, while the smaller ssrathi are shunned and relegated to tasks such as foraging, farming or minework. Despite this, each ssrathi community progresses smoothly, governed by local ssrathi Seers - magical diviners and worshippers of Couatl, the sun god. All ssrathi have strong religious and spiritual ties - especially with their ancestors and the wild. So in-tune are they, that even the great Dinosaurs of the land have been tamed. Any oddities with their peoples or their environment are easily sensed by any ssrathi - especially Seers, who are delivered visions of another place or time in a trance-like state. The greatest Seers can detect foreign influences over much of the continent and are regarded with the deepest respect. Each individual tribe and community answers to a council of Seers, which democratically governs the country together.

Ssrathi are a very productive race. Every ssrathi has a place within the castes of society and performs whatever task deemed necessary by the local Seer. The destiny of all is decided at an early age, and from that age they are trained in whatever art the Seer has chosen for them. As a result, few ssrathi are skilled in multiple ways but are always experts of their singular craft. Should all members of a craft be lost in one way or another, the rest of the tribe will struggle to function. Most ssrathi appear somewhat emotionless, but hatchlings and the young can be very mischievous and adventurous. Even though they may not display emotions as much as other races, ssrathi are still very capable of them. Stronger emotions such as anger and fear tend to show more than others. This, coupled with their primitive lifestyles, has led some to believe ssrathi to be an unintelligent species, but the truth is very much the reverse. They are cunning, thoughtful creatures with a spiritual enlightenment greater than almost all others. But like many other races, there are also those who are unthinking and brutish, using strength as an indicator of status. There is sometimes conflict and abrasiveness between the castes, but despite their differences, almost all ssrathi believe the whole is greater than the part. Due to this ideology, most ssrathi are receptive and empathic, desiring to be part of a group rather than to be alone. For this reason, ssrathi make good, trusting companions who never fail to honour a promise.

The history of the ssrathi is known only by few. Millennia ago, when the elves were still young, ssrathi were created in prehistoric Keshan. The very first ssrathi were quadrupedal, immortal creatures with great insight. With their magical powers, they constructed the great temple of Kalpaxotl beside an active volcano. Ixtlitona, or the Sun’s Eye, became a sacred monument to Couatl. If the lava was too high or low, it would be seen as a sign of their own wrongdoings and an omen of the wrath to come. Offerings of gold and jewels mined from the Ilhuicac Mountains were made to Couatl so that the ssrathi would be spared his wrath. However, from beyond the aether, Tlatecolotl, the god of cold, darkness and spirits, manifested himself within the minds of some of the elders. They began to feel doubts, quietly suspecting that the sacred volcano did not represent Couatl. In time, they were persuaded and fled to the mysterious lands of the east. There, in the misty hills of eastern Keshan, the night temple of Tzicolotl was constructed, honouring Tlatecolotl. From that moment on, Keshan was a battleground between the east and west. One side believed that the other had renounced the sun. The other believed that the sun idol was false, and that they must better themselves by confronting their nocturnal weakness.

The war between the two factions was long and bitter, and as the two sides’ power waned, another side rose. These were the dragon-worshippers, disciples of the dragonlords. Within the centre of Lake Hueiatl, the temple was constructed. Dragons who had hid themselves since the Dragonwars congregated and, with their mighty breath, carved out a new nation ruled only by dragons. The sun and night ssrathi of west and east were decimated both by each other and this new power. Thus the era was known as The War of Three Faiths, an extensive period in ssrathi history in which three nations struggled for supremacy. Once weakened, the east and west gradually began to cease attacks on the other. The only choice they had was to create a temporary alliance, that they might stand a chance against the dragons. Both sides hated the thought of being subservient to beasts. Worshipping them as gods was blasphemy to both Couatl and Tlatecolotl. On this mutual ideology, a temporary bond was made between the two peoples. Together, with the miracle of the dragon turtles, the sides made a precise attack on the island city. The battle of Anepantla (‘in the middle of the water’/’middle of the lake’) was one of the most vicious battles in ssrathi history. The waters of Hueiatl burned and the sky fell. Sinking the city to the bottom of the lake, the alliance claimed victory and the dragon-worshippers were routed. However, the victory was costly - of all the eldest ssrathi, the only one to survive was Iriki. Much of the rest of ssrathi history was shaped by reconstruction. The sun and night ssrathi remembered their bond, and as such each side left the other in peace. Great monuments were built to all the ssrathi that died in the war, cities were built, farms were founded and dinosaurs tamed. During this period, the Isle of Tongu was discovered and claimed as a holy land.

All was prosperous and there was little conflict between the sun and night ssrathi until a strange and friendly race of creatures arrived (3786 HET). They called themselves humans, from an empire across the sea named Selentia. The council of Seers in Keshan spoke of an omen, that these fleshy creatures would soon betray them - and soon they did. Having gotten word that gold was plentiful in Keshan, the merchantmen of Selentia invaded in full force, justifying their actions by claiming ssrathi to be ritualistic heretics. Some say that the whole war was a plot created by the Dark Path to spread corrupt diplomatic relations. Over the course of fourteen years, all territory east of Aculoya was taken by the Selentines, creating a new nation which stretches past Maleque. The weaker and less willful ssrathi were enslaved and put to work on plantations and in mines.

Every other day, the imperials try to find a way to cross the great Huecayatl River (‘Deep Current’ River) and invade the farmlands of Atlan. Each time they do, more gold is taken and more ssrathi enslaved. Against this new threat, the sun snakemen of Keshan have banded together and will never yield - to the Selentines or any other invaders which have come to take their gold and culture away.

Dragon Wars seems like it would be an interesting Campaign or Chapter.
Will we have Dragon Turtles?