After many months of studying and researching old scriptures from different sources, both official and fan-made, we have created a compendium of Etherian lore. Warlords and warladies, today we would like to present the knowledge we gained about the Plaguelord race. 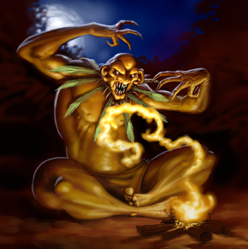 Created by the daemon god of plague, the plaguelords are disease-ridden creatures that desire to spread their sickness all over Etheria. Almost all plaguelords consist of ghouls - one of Antharg’s ultimate creations. They exist in a permanent state of biological half-undeath, devoid of thought or emotion. The horrible curse they bear is highly contagious - almost any creature affected will soon turn into another of the living dead, even if the creature was already dead. It does not matter if the host of the disease is missing limbs or their guts. Sometimes on rare occasions, ghouls can manage to rise even if their brains are damaged. It isn’t known exactly what happens when a ghoul’s flesh rots away over time, but some suggest that the oldest of ghouls are permitted to become plague priests - a type of ghoul whose very touch can putrefy flesh. With these powers comes a malign intelligence, mastery over contagion and the ability to create repugnant artifacts. Usually, such dangerous beings rule over legions of ghouls, doing whatever they can to spread the divine will of their god.

Not all common ghouls are completely mindless. Occasionally, a ghoul can retain some of the magical powers, skills and even a small amount of the emotion it had in life. These types of ghouls are known as ur-ghouls and are one of the few types of creative ghouls. Many ur-ghouls specialise in creating magical artifacts, maintaining the equipment of common ghouls and the practice of dark arts. Antharg’s war-machine is driven almost entirely by these servants, and as such they tend to congregate, resulting in ghoulish settlements. As very few ghouls are able to construct structures, most ghouls settle in ruins or fallen cities, ravaged by the virus. Any conflicted decisions are debated by the local circle of ur-ghouls or plague priests. Just like true undead, ghouls do not require any sleep and although they desire to feed on flesh, they don’t often need to. As none of them have any conflicting agendas, they will always collaborate, whether that be to further some nightmarish project or assimilate a settlement.

Plaguelords thrive on mutation. Those few with emotion enough to feel are proud of their diseases, actively seeking a way to further mutate themselves for the sake of their god. Plague tasters, a proto-form of ghoul, scour the land to find new viruses in which to infect themselves. The most dangerous of illnesses are taken back to ur-ghouls, plague priests and very rarely - even Antharg himself, so that they will develop and spread the virus into a new epidemic of sickness and mutation. Nothing pleases the daemon god of plague more than the mutilation of the pantheon’s creations, twisting them into warped reflections of themselves.

With little to contest them, the plaguelords have thrived in the area to the southeast now called the Realms of Plague. Down the middle lie the Plague Mountains, a barrier between the monstrosities of the plaguelands and the rest of Etheria. Even the jungle itself is infected - restless ghoultrees, trap-like modanyars and other such abominations await unwary prey. Thousands of ghouls and other monsters have spread from Plague’s Edge, claiming much of Colis Tarn and the Sserin Jungle. In 2917, the deathbringer Frellen even managed to charm some of the ghouls and bring them back to the Realms of Death. In just twenty years the land was swarming with ghouls, led by King Dhargul of Gol-Draaka.

Now friendly with the god of death, Antharg has become one of the greatest threats in Etheria. From both north and south, the plaguelords command endless hordes of the walking dead which only seem to grow in number. It is only a matter of time before Colis Tarn falls to the plaguelords, and should that happen there will be almost no force capable of stemming the tide of disease. If they are not stopped, the plaguelords will assimilate all of Etheria, recreating it as a twisted mockery of existence.