Post feature RSS Modderview: A Peek Inside the Minds of Modders

Read up on an interview series DBolical’s editor Kralich/David took part in.

Recently, the editor/community manager for DBolical, Kralich/David, was featured in Season 3 of VideoGameTourism’s Modderview interview series. Read on to see the other interviews from the season as well as learn how you can take part!

The Word of Mod

Whilst interviews with game developers in advance of major releases aren’t uncommon, it’s significantly rarer to see community creators given the platform to discuss their own methods, workflow, and attitudes to development. Modders are some of the most adventurous and creative people out there, thanks to the lack of constraint on their imagination and the passion needed to see a mod project through to completion. Thanks to Stefan Köhler, more than a few modders have received a chance at the spotlight.

Stefan is a guest author for Video Game Tourism and previously also wrote for WASD magazine. Though the publication is German, it also runs occasional English articles (and it’s worth noting Google Translate does a decent job at translating all the articles anyway in-browser). He began Modderview with the simple goal of getting a glimpse at what goes into mod development, and the motto, “Don’t like the question? MOD IT!” is all about allowing interviewees to have a permanent effect on the next round of interview questions. With the final interview with myself, Season 3 of his Modderview series is concluded, and we’re going to briefly touch on all three interviews.

Josh Romito’s GTA V: Redux gives an already beautiful game a great graphical uplift, with new weather mechanics, textures, and more. His interview can be read here and below: 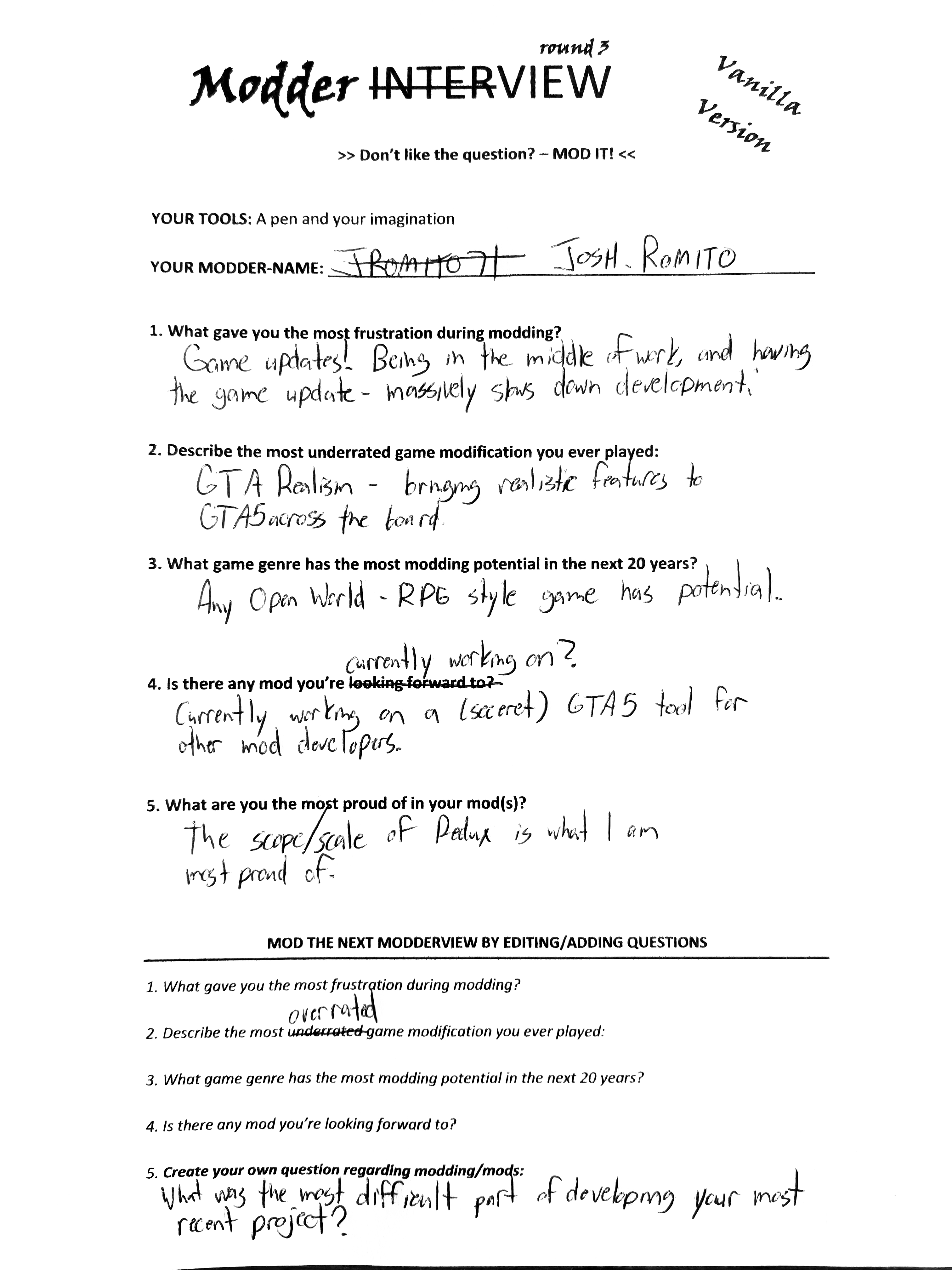 Starting out as a total conversion mod project, Eyaura’s dark cyberpunk story filled with body horror and unpleasant sexual undertones graduated into a standalone game on Steam. Her interview can be read here and below: 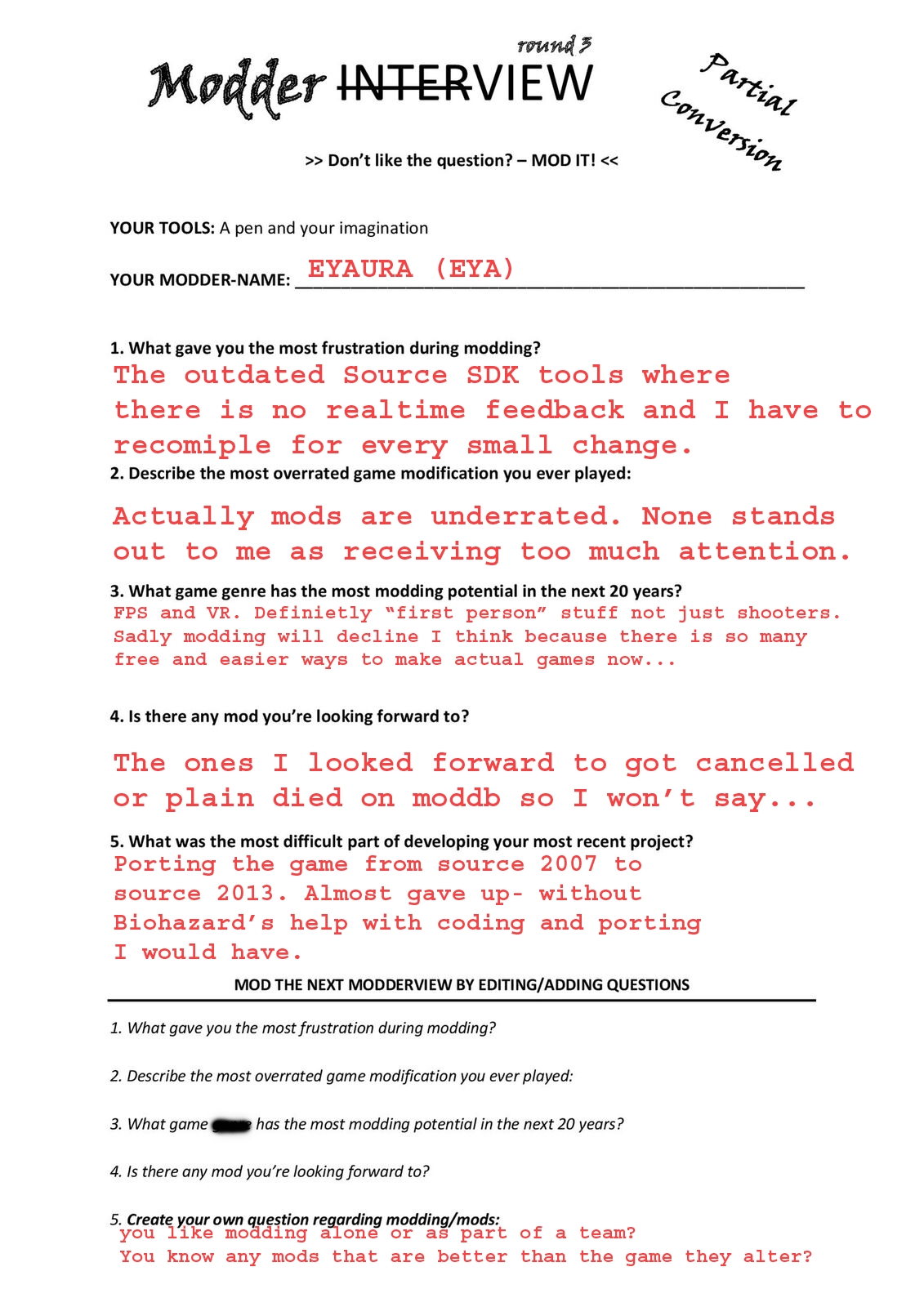 Raising the Bar: Redux is a Half-Life 2 alternate story mod set in the cut content storyline of the game. The interview can be read here and below: 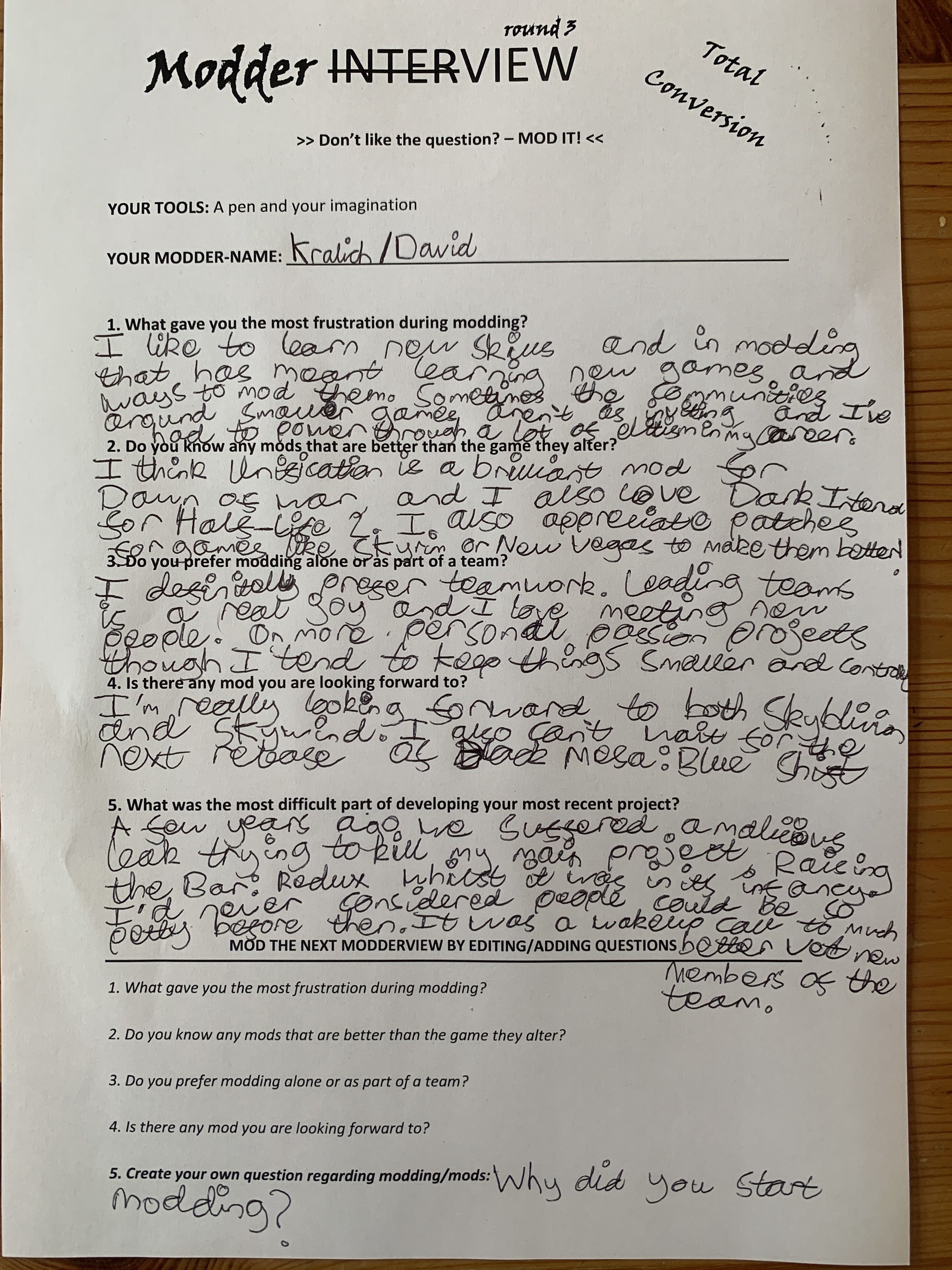 (I added additional details during transcription too, though the other two interviews don't feature transcriptions:)

Stefan is always looking for suggestions for talented modders to take part. If you’re an experienced mod developer or know someone who is, check out his ModDB profile, drop him a PM, or comment down below on this post (as he’ll be checking the comments here too!)

Special thanks to Stefan for the opportunity to be a part of Modderview! Don’t forget to check out Video Game Tourism’s other Modderviews of the past to see more glimpses into the modding community and what it brings to the table.

Thanks for shoutout, David, and great to be back again on ModDB! :)

Great to have you here, Stefan! Keep at it!

Write smaller, David! Hahaha (I hate it when I realize that I'm gonna run out of space on a sheet of paper).

I too am a big fan of the wealth of mods for Skyrim and Fonv, especially the power armor stuff.

I agree with Eya when they say that there's a lot of potential for modding VR games, the whole platform could make for some interesting new experiences (hopefully VR gear will be more accessible to people in the future), though I disagree with them on the latter point, there's certainly more convenient ways to put an idea in practice nowadays, but I feel like people will always want to change something about some game they like, or they may want to use it as a starting point, and there will always be newer games that are popular with modders coming out (like Minecraft).

This format is a great idea, I like how people can change the question to something they are more interested in answering and that they can pose a different question to people, creative stuff, thematically fitting for Moddb.

I've got giant hands that write oversized words :( But yeah, I also think there's a lot of potential in VR - some of the most fun I had with an Oculus was custom maps in Pavlov (one that sticks out in particular is a Cyberpunk map that used to play Carpenter Brut music and was ideal for a deathmatch gamemode!)

Ohhh, Carpenter Brut is perfect for a map with cyberpunk aesthetic.

Happy that you like the concept, NiiRubra, and also agree on the potential of modding VR games - have to find time someday to write something about this topic ^^!

It's very interesting to read these for other modders aswell! I'm looking forward to seeing more content like this.