When it comes to the Toxic World, the survival here is harder than in any other world. 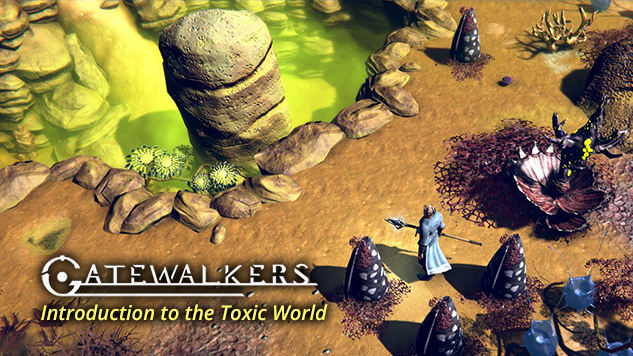 Variety is good, surprising player - even better. That’s why we implemented many worlds to our game; their name might suggest something, but we made sure that each one is unpredictable and has lots to offer to the players. Same goes with toxic world - the name may ring a bell, but we wanted to avoid clichés at all cost, creating one of a kind experience for characters coming here to complete their quest.

When it comes to toxic world, the survival here is harder than in any other world. Atmosphere here is contaminated, which makes it almost impossible to breathe without proper gear. The terrain is mountainous, that’s why there’s a number of levels that players can explore. Top is relatively a safe spot, but the lower they travel, the more dangerous it becomes. Also - the closer to the bottom, the more poisonous the fumes in the air become, so everyone should have an antidote in their equipment in order not to suffocate.

Air isn’t the only thing that’s contaminated here. Same goes with food, so player better take enough of supplies to survive, or quickly learn how to purify what they’ll find here. Creatures that live here, don’t make it easier either. Because of the surroundings, they live in, weapons with poisonous traits are no use. However - their toxic effect works just fine, so players have to be cautious during combat in order no to envenom themselves.

Speaking of infection - toxic fumes aren’t the only phenomenon that players have to be aware of. Some parts of the land will need players to get through puddles; without proper outfit their characters will be poisoned very swiftly and their weapon will get destroyed. Doesn’t sound like much? Don’t worry! There’s also toxic rain, that moves around the map. If players don’t hide from it quick enough, they’ll have to deal with the consequences. And it won’t be easy heal those poisonings, especially if the whole team becomes sick from the rain.

We want our game to be enjoyable and interesting. Since it’s a survival one - we can’t go easy on the players. We cannot bore them with same environment, that’s why we created so many - and they all differ in appearance and mechanics. They all are surprising and changeable. We think that it’s important to care about the people that are going to play your game - listen their needs and advices and give them the entertainment they ask for. That’s why we’ve made terrains toxic, so the community doesn’t have to be.

are there lots of trolls in the toxic world?

Yes. It is where all the trolls and SJWs come from.