This final entry in the 013 update series has brought some closure to the missing settings of the world panel, with room & weather transitions to give more natural effects. On top of all this we’ve gone and done another performance sweep, optimising what's there, and removing what’s no longer needed, resulting in a much higher fps!

This final entry in the 013 update series has brought some closure to the missing settings of the world panel, with room & weather transitions to give more natural effects. On top of all this we’ve gone and done another performance sweep, optimising what's there, and removing what’s no longer needed, resulting in a much higher fps!

The star of this update is the new Room & Weather Interpolation systems. Instead of simply switching settings when change rooms, there is a transition area set by the user for each room placement which defines the area of which the settings gradually change. This creates a much more natural blending effect when interacting with your world while simultaneously removing the horrible pop-in effect.

Another new introduction which was previously not planned is the new Light Flickering system! You can now make a much wider variety of lighting effects instead of just a constant light source. Maybe you need a slow fading in and out effect or a fast flashing light caused by electric sparks, it’s all possible now!

Last thing on the new features list is not really a new feature but rather a complete overhaul of an old broken one. An Undo system is key to world building. Being able to backtrack on unwanted progress allows for a more fluid workflow and experimentation within the scene. This system had been broken for quite some time but now works like a charm.

Currently it is restricted to only work with changes made to Model, Lights and Emitters. This is because we want our testers to find any problems that may exist before taking it engine wide.

Here is where most of the effort was assigned for this update. We did a complete sweep through the engines shaders and found several areas which we’re being calculated multiple times per frame despite the fact it only needed to be done once:

Putting all these improvements together saw a huge improvement in performance on the GPU as well as a minor reduction of cpu usage, resulting in a drastic increase in frame rate! 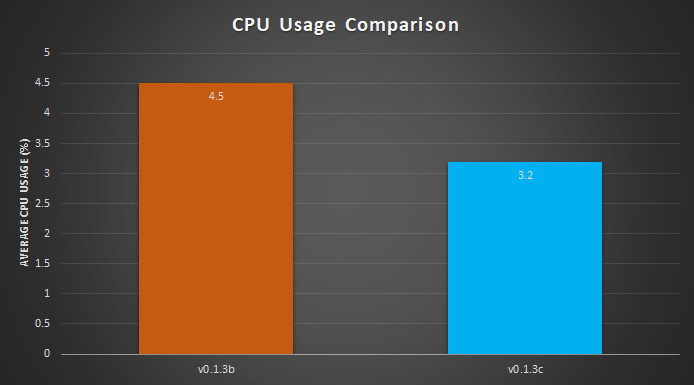 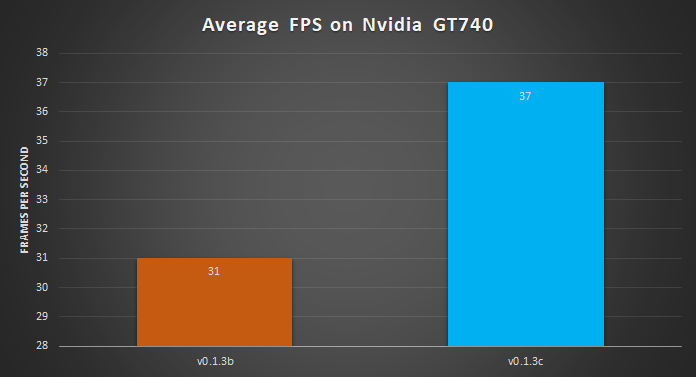 Tested on Nvidia GT 740 to compare performance on older card.

But aside from improvements to performance, we also did some additional tweaking of existing systems. Particles now have a new setting in place that allows you to define whether or not they should be drawn into the bloom pass, to give an extra glow effect. In previous versions this was on by default which was great for stuff like magic effects, not so much for weather. In fact a common problem was glow in the dark snow! In any case you now have the option to enable or disable this effect for each individual particle for each Emitter.

Lastly, upon constant request (and rightfully so) by the community, the 3D Cursor has had a complete rework. Originally the offset translation was calculated based on Mouse movement horizontally for X and Z axis transformation and vertically for the Y axis. This worked great so long as you were facing the 3D cursor from the right angle, otherwise it had a tendency to start moving things in the opposite direction to what the mouse was doing. Not anymore! We’ve completely scrapped this method and replaced it with the far more accurate and more optimised Projected Plane Intersection Method (nerdy math stuff). The cursor reacts exactly how you would expect it to with no annoying random movement!

This final update brought the conclusion of the 013 series and we are proud to know that we achieved all our targets for the series. Developers on older GPU’s can now run the engine on a smooth 37-40 fps as opposed to the 10-15 fps from before making the experience that much better. We are far from done with performance and optimisation but the time has now come to refocus efforts on to a lot of new systems.

The 014 series is all about terrain! While Bright does have a basic terrain system already in place, we are going to be revamping the whole thing. We’re going to fix the clunky sculpting, introduce painting tools, tessellation, and the long awaited model brush system for ultra fast environment building!