Add file Precursor of "Into the Dark"

This is actually the 1-Level-Demo-Tryout freebie rubbish version that won the Scariest Game contest at the TGC boards. While being unpolished and technically inferior compared to the Game we are developing right now, it *DID* ignite the spark leading to the game we roll out right now. The basic story idea was the same, and also the humor and the chars attitudes were taken over to the current project. Everything else has been changed in the meantime, especially the FPSC version has been overhauled twice. Grafix, animations, voice overs, weapons - all that has been improved or totally exchanged. A Questlog has been added as well as some RPG features. All of these improvements are missing in this version, it`s really the one contributed to the contest. So here you can play the level that started the developement of "Into the Dark". Have fun! PS: Read the description.

is set to 1680*1050, as this turned out to run fluently on mid-range machines.
If your monitor doesn`t support that or you want to go higher, open the setup.ini here and look for

WASD - Player Movement
Mouse - Head Movement, Shooting (Leftclick), Aiming (Rightclick), Carrying Objects (Rightclick)
R - Reload (As in Real Life, you can "overload" any weapon by choking and restocking magazine, so you have a total of Mag capacity + 1 shots.)
Q/E - Peek left / right
C - crouch
SPACE - jump
ENTER - Interaction (I know that F is better, however, I want to reserve that for Flashlight in future developement of the idea) 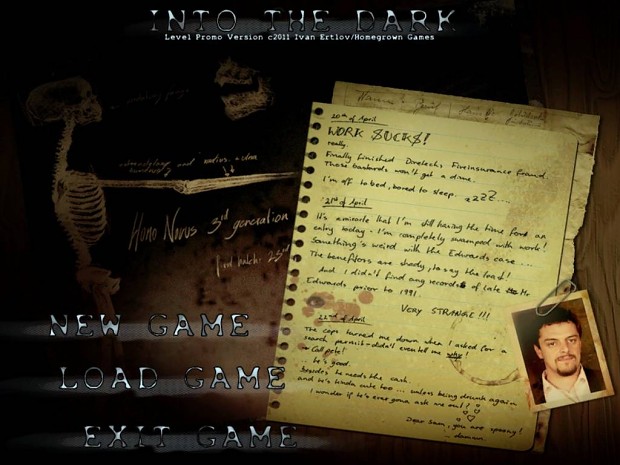 The gamefront doesnt work is there another adress for this level?