New features include:
- Master Server, user login and server browser, make your own servers!
- New inventory system, you can only build with what you dig up.
- 3 building block types, Moon Dust, Iron, and Aluminium (they are currently automatically forged into man made blocks when you pick them up).
- New Astronaut character model with animations.
- Horizon warping to simulate a round moon, eventually it will be possible to walk and orbit all the way around the moon! 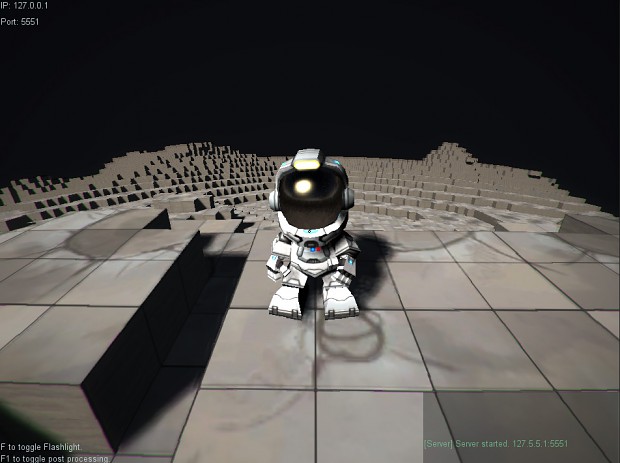 Stays stuck at initializing map.
No button to create server too.

It can happen that it pauses while loading the blocks, but it should always continue after a few seconds, atleast it does for me.

To create a server you need to open the server.ini and set isserver=true and generateterrain=true. Then launch a instance of the game, when thats loaded launch another instance and click on the appearing "register with master server" button. port 5551 needs to open for the server.

I dont like this cus i started playin it, i went on the only server there, then i joined it and waited, when i finaly got onto the game it was really slow so i went off it, turned down the graphics and went back on and joined again, then i spawned and flew miles away from the map...freakin retarded :|

You experienced a couple of small bugs on a game that is still WIP and you are being that judgmental? You're on ModDB, surely you've used mods that are unstable.

Whoops. Mined through the map. Hopefully the walk around the moon feature will include a 'dig all the way to moon-China' feature :P

I like the premise of this game, it looks and feels great!

If kurtloeffler reads this comments,
I have some points/suggestions/bug reports to make:

1)Make creating a local server easier (using buttons like "launch local server" "launch local client"), with the server, master server, client and what not, I was confused as to what I was supposed to do. By setting the isserver=true and generateterrain=true I was able to play the game, but while my inventory is saved, the map is not, a new one is generated every time. I assume I must be doing something wrong. (some combinations of true/false values I tried, using ip=127.0.0.1 gave me "Fatal error in gc: GetThreadContect failed" )

1b) "Keen's server" looks terrible because the players have stripped away most of the cubes, it will give new players the wrong impression, just random columns everywhere. I don't know if you can really do something about this one though, making the creation of a local server easier would solve this too, in a way.

2)This one is more of a suggestion/idea for when crafting is implemented. Consider making crafting less like Minecraft with the 2x2 flat space we already see in the inventory, and more like 3D, by putting the cubes on the ground (or an iron platform perhaps!) to craft what you want. Especially for moon rovers, consider making "wheel" and "engine" parts, around which you can build the rest of the rover to look as you please (with some size limitations perhaps)

3)And some minor bugs I found: (some may be related to the fact that I played using the server and not a client, sorry if that's the case)

-When in chat mode, pressing one of the WASD keys will still move the player
-If you are standing on a cube and you target its bottom right corner, you can put a cube behind it and diagonally
- Not really a bug, but I couldn't find how to switch to 3rd person mode like in the screenshots

That's all, looking forward to feedback (and of course updates!) :)

it will not start,stuck on gray screen

Seems to be stuck on gray screen.
Help?

this game is online? Because I called a friend so that he found in me, and the map is small and square, if you have a fall vouta from what I saw, I think the version tou wrong :/

when i start i get a gray screen any fix for this?

Yeah, gray screen for me too D:

I could not get it to run :C