An accurate simulation of "The Hunger Games". You're a tribute, fighting intelligent AI in a "battle royal" to be the last person standing. Inspired by the novels by Suzanne Collins and the movies by Lionsgate Films. This is a turned based combat game in 1st person perspective, with Roguelike elements. The randomly generated arenas feature a central "Cornucopia" filled with melee and ranged weapons along with food and other gear, surrounded by wilderness in which one can hide or forage. You may form alliances with the other tributes, and backstab or be backstabbed by your allies. In the preview image (from a special "Audience" standpoint) you can see the semicircle of 24 tributes on their platforms, the central golden Cornucopia, gear in front of and within it, and surrounding landscape containing mountains and waterways. "May the odds be ever in your favor!" :) 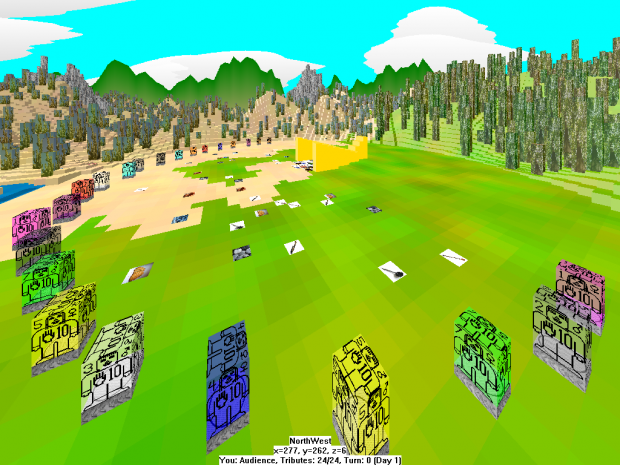 Thx for the christmas gift

Hey, just wanted to pop in and say I really enjoy this wonderful game you have made, lso was curious about what is new in version 3.3

Glad you like it! :) Version 3.3 doesn't have many visible changes to the Hunger Games Simulation itself. The underlying Daedalus engine was updated, and as a result so was this game. There are however a few minor game improvements you may notice, such as:

Status line will indicate max hp and max food available in addition to current, if the max has been customized to be different from the default.

Turning on textures (Ctrl+F12 or "_" hotkey) will give a warning about no textures available if none of the files are present.

Fixed bug about tributes not responding to feast announcements properly (usually they would always come, and non-Careers would never decide to ignore it).

Fixed misspelling of "Cornucopia" in the feast announcement, which apparently nobody noticed and has been in the game since before version 3.0. Seriously, see this screenshot: Indiedb.com ;)