With the new UIs in, EiR finally goes public beta. We're looking forward to hear about your feedback guys!

UPDATE : New build, lots of fixes, Zeppelin in, and also a taste of the dialog system and some of the story characters!

The build is battle map-only beta (it has one map, one terrain, and none of the 4X or management part). It is still rough, but it has everything the final map engine will have in, minus a lot of polishing.

Having EVERYTHING in since the first start of the game might seem overwhelming, but at this stage we really need to test it all. Later on, in the game, you will unlock progressively towers, abilities, new enemies, etc.

What we would now really need from you guys is feedback. All sort of it, about everything, and if you like what we did here, join our community so to come along with us in the last months of work to get Empires in Ruins finally done. 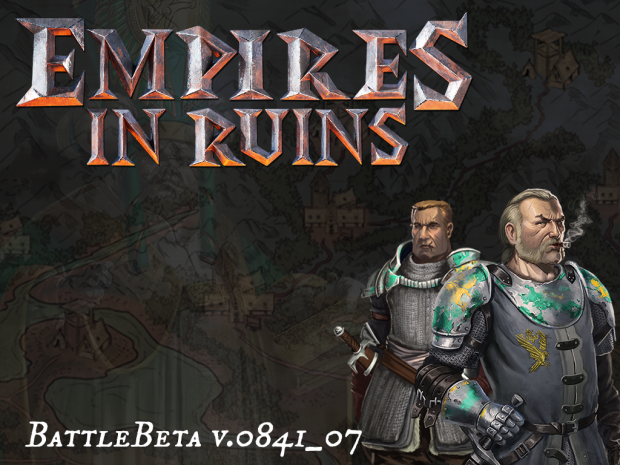 1) Which is an ideal starting setup for the battle beta?
I usually like to begin a battle with a scout tower near the castle, two guards and one catapult towers covering more or less the main access paths. Later on I do expand my defenses a bit more far from the castle in order to avoid area damage and to distribute a bit better the killing.

2) Should I start by building resources building?
I strongly advice against that. In the beginning it is more important to have towers and defenses. I usually start with a Lumberjack around wave 4-5 and then i follow up with an Iron Mine in 1-2 waves. Resources are important for higher level upgrades, but defenses are more vital at first. Usually by the end of a map I have 2 lumberjacks, 2 iron mines and 1 quarry built.

3) I am always low on gold, how do I make more?
The gold is made by killing enemies and skipping waiting time between waves. Using the cool down ability "Loot the corpses" ( icons on the lower left, the first one of the second row) you temporarily increase the amount of gold you get from killing the enemies
The Temple (the 1st upgrade of the shrine) has a special ability (to be bought manually) that increases by 50% the gold made with kills in the area around it.

4) Ballista and Repeating Ballista towers are quite inefficient, how do I use them?
These towers can deal really high amounts of damage, but need to be used in a quite technical way otherwise they can be very inefficient. Place them at the end of a long straight leg of the path. Upgrade their range and set a fixed shooting point in front of them, at some point of the straight path. This way they will not waste time shooting enemies in other directions and whenever enemies line up on the killing line, they will damage A LOT of them with a single shot.

5) I hate the Sappers, how should I deal with them?
Sappers are only dangerous if they get close to your towers, and they are mostly dangerous against base towers made of wood (Scouts, Guards and Catapults). They shoot fiery bombs and when killed cause fire damage all around.
The best way to deal with them is through stone-made Crossbow towers (and their upgrades, Repeating Crossbow and Sniper) or through the use of smartly placed artilleries (also catapults) that takes advantage of the towers longe range.

6) Flying enemies are causing a lot of damage to my towers and castle when I kill them, what should I do?
Don't build your defenses too tightly. Flying enemies arrive for the first time after quite a few waves, take advantage of the scout tower in order to see from where, and build some archery towers along those paths. They will also be useful against ground enemies in their spare time. All the archery towers are good against fliers, but the best compromise quality/price is probably the Composite Bow towers with the ability Aim High (+75% damage to flying enemies) unlocked.

7) Can I win the battle without deploying ground soldiers?
Yes, you can, but I think that if you do deploy them, specially in the surrounding of the castle, you will have a much higher chance of winning, and also a much higher chance of winning with a perfect score. Each soldier can engage up to 3 ground enemies (beside the Hussar and Tank that are not stoppable) and while their damage is quite low, they are fairly resistant to the enemies attack, providing nearby towers time to kill the invaders.

Cheers and hope to hear you soon from you guys!