To everyone who helped me beta test.

NEW 1.2 version released 27/10/09 This map has been designed as a huge playground. Based loosely on the pub from the film Shaun of The Dead, as the center piece of the map, the surrounding area has been created from imagination. Despite it being fictional, the map carries an East London feel to it. Iv attempted to create a vibrant and realistic atmosphere, that will actually pull you into the game. There's a few minor bugs, but nothing that will distract you from playing. I designed it to be played on hard or suicidal level, to get the most fun out of it. Because it's such a big world, you can easily get away from a few weak monsters. It has 3 hidden secrets, please DONT tell anyone when you find them.

East London is being overrun by a spread of an infection, which has turned normal human beings into brainless zombies. Shortly after 2 survivors were rescued from the clutches of evil, the army has returned to clear out the once happy, but now corrupted community. 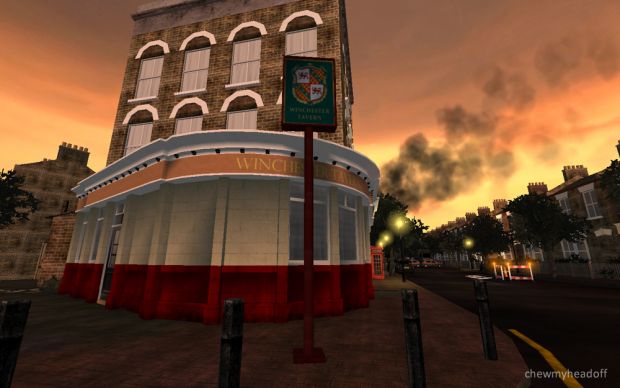 So we got there then...eventually. :)

Great perseverance in your part since the release of the game. You went from new Unreal mapper to bringing out a high quality KF-SawnOfTheDead. It's finally good to see the effects you were working on over the last week successfully implemented. Well done!

Thanks man, really appreciated your help and everyone on the forums. Was beginning to think that everyone was getting nnoyed with my noobish questions :D.

A NOTE to all players and judges, please look for the big secret, and also ensure you have dynamic lights and EAX 3D sound on.

Great map and a potential winner IMHO. One of the easter eggs is just awesome and a first for any KF map created so far.

Does this have any relation to KF-DogsCantLookUpbeta1?