The Demo of Zoria: Age of Shattering is now live. You can play it now on itch.io and Gamejolt.

Posted by tinytrinketgames on Mar 13th, 2020

In the last few months we’ve been silent but hard at work, to be able to bring today the DEMO for Zoria: Age of Shattering. After a few limited releases on our Discord server and a few rounds of bug-hunting we now feel it’s ready for public release so here it is.

Play the DEMO now on ich.io and GameJolt

The DEMO consists of the first dungeon and traditional party-based RPG gameplay. 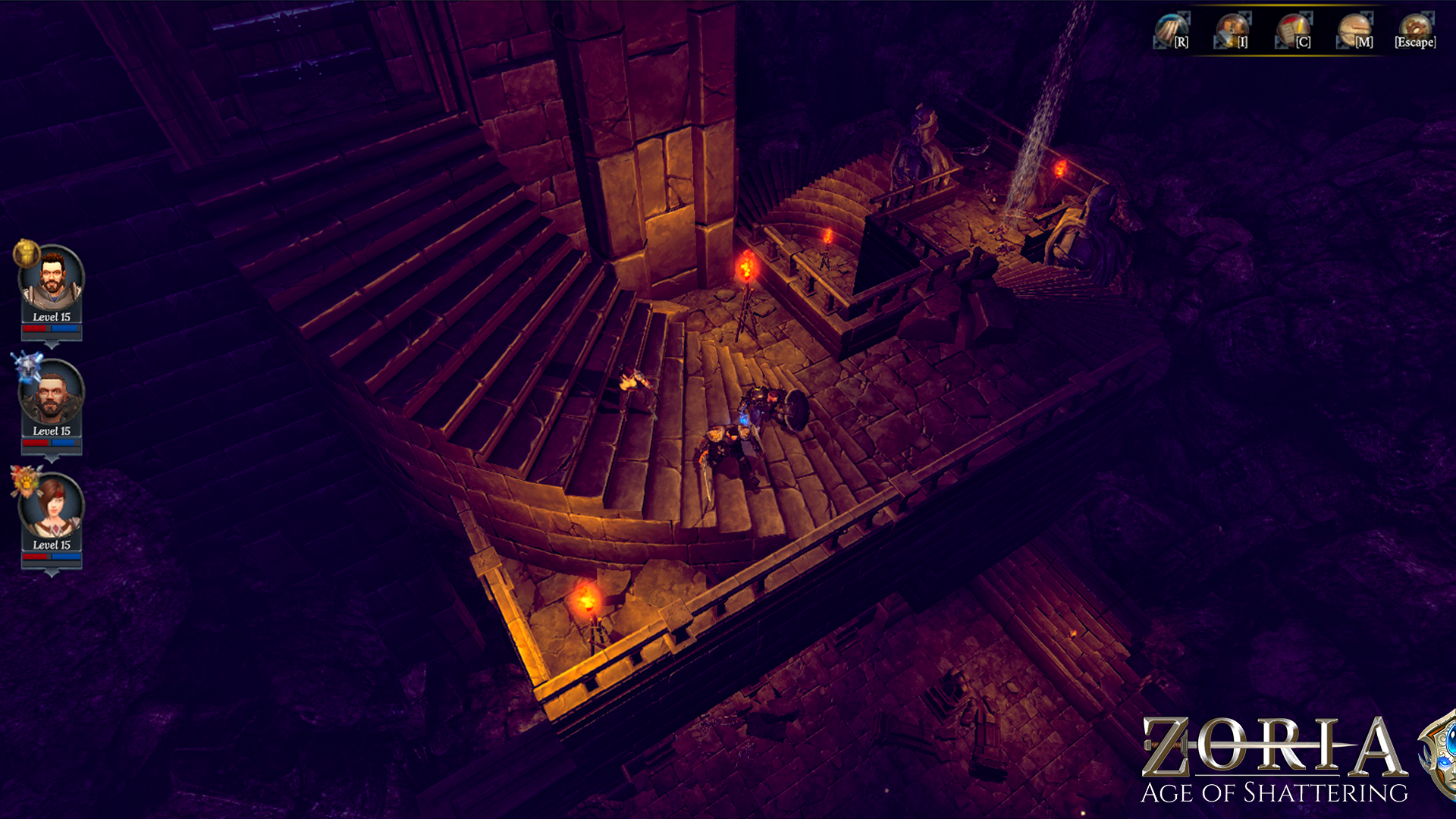 The most important things to see in this DEMO are:

Tactical, turn-based combat, of course, since combat is a very important part of the game. Most of the encounters should be easily managed by the player but there are a few that require a little more care and wise management of the available abilities. The combat itself is a mix of old and new, as it’s turn-based but not grid-based, allowing for a greater freedom of movement and gameplay speed.

Survival systems - resource management and, yes … hunger. Making camp and resting will restore health, vital resources and even cleanse a few negative effects. But resting is only available if the party has the necessary supplies. So, keep an eye for items around you that could provide supplies.

Abilities and gear management – each follower class has specific abilities to choose from, abilities that get unlocked when a follower reaches certain levels. So different players have the choice of abilities to match their playstyle, for each class. Also, combat, exploration and doing certain quests can yield useful items.

Story and Quests – an important part of every RPG, the main story the game follows and the many stories the player encounters along the way, stories that, together, paint a picture of the world and its inhabitants. In the DEMO the player is introduced to the world of Zoria and to the events that will make up the story of the game.

Compendium – a companion for the player, the compendium gathers all the active, completed or failed quest, short descriptions and tasks as well as all the story and lore gathered while playing: creatures, characters of interest, letters, rumors, places and other information.

With this, we conclude our short presentation of the DEMO. We hope you will enjoy playing it and we would like to hear from you with comments, suggestions, question, etc.

No demo for Linux?

Not yet, had some technical issues that are being worked on. It's coming, but we didn't want to postpone the release anymore, we already did that like ... 10 times :)

Hey. I played the demo and here is some feedback.
In general, I really like it. I won't say much about UI because I know that it will change.
- Camera is O.K. but it definitely needs some work, it can go out of bounds and sometimes is way too zoomed in
- I like how fast combat is, animations are fast and snappy
- One thing that I think players should be able to change is positions of party members before or when they enter combat. Because what happens to me now is that my "tank" character is so far behind my other characters that I have to waste first 2 AP to get him closer to them
- Do you have narration in some parts? I like how party members react and comment certain things when you go through a map. I'm not sure if that should be coupled with a narrator ( if you don't have one than ignore this)

Can't think of much else right now. Overall, the game is pretty solid and has a fun and easy to learn combat. I will follow your development and hopefully you will do well!.

Hey Sweet_Lemonade, thank you for your awesome feedback, it is of great help to us. We're glad you like the game overall.
Regarding the issues you mentioned, I'll try to answer them one by one:
- Camera - it's a work in progress, we're still updating its behavior;
- Change party position - absolutely, we're looking into a few possible fixes, still not sure which way it will go but we'll work on a solution and update based of feedback;
- Narration - we don't have anything lined up at this point, it's still in discussion whether we'll be able, budget wise, to do so.

If you want to follow the development or give live feedback on the game iterations, you can join our Discord.

Thank you again for taking your time to give us this feedback, it really helps.
Cheers