Over six years into development now xD. Time for more dev hours talk, a glance back at all the releases and special events from the year, new milestones, and 2020...

Here’s our annual image collage to start us off: 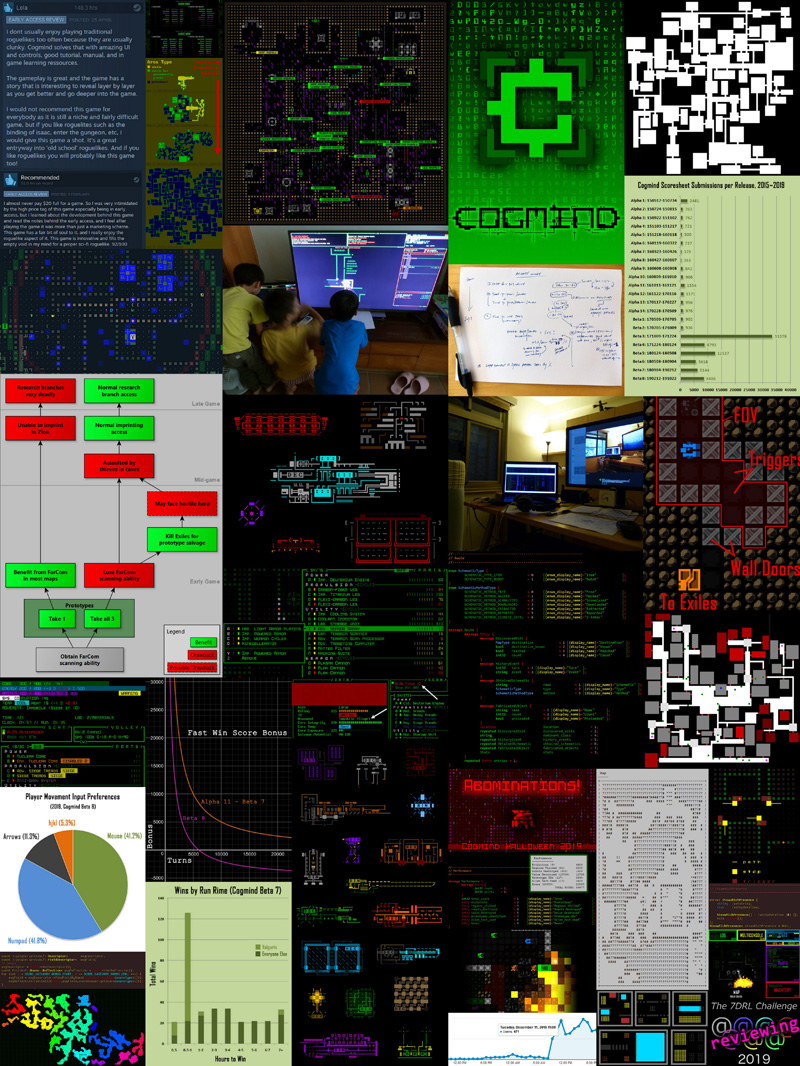 Selection of images from the past year of Cogmind-related development as posted on this blog,
forums, and Twitter (full mega size here). 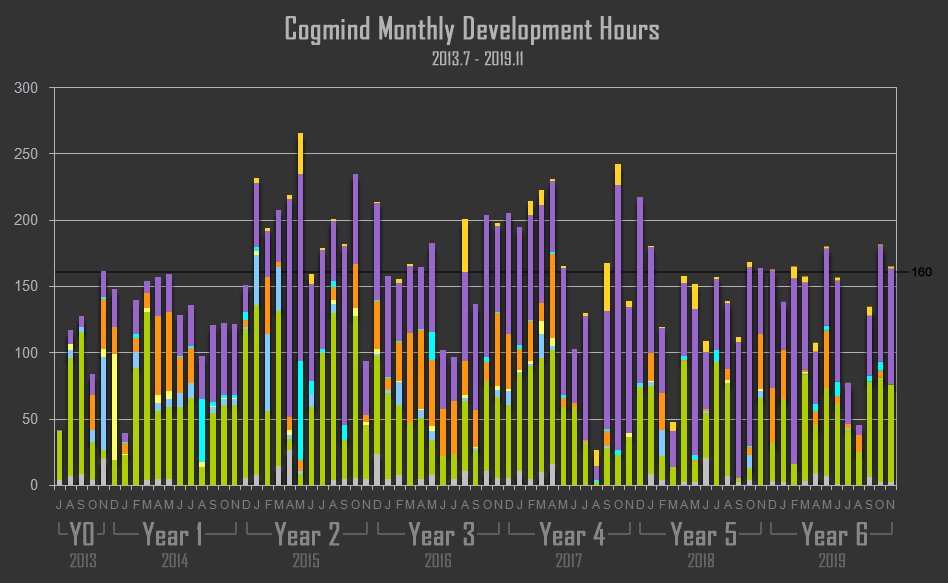 Cogmind Monthly Development Hours, 2013.7-2019.11 (click for crisper full-size version).
(The color coding is for different aspects of development tackled each month,
the subject of a future in-depth article to come at a later time.)

June and August were lower since I was gone for nearly four weeks of vacation during that period, but otherwise it was a pretty typical year overall. In the past 12 months I added another 1,676 hours, a slight 3.5% less than in 2018. However, work on the game itself totaled 852 hours, the first time that figure has outpaced hours spent on community-related work (purple) since prior to launching on Steam. You can see what I mean in the following graph. 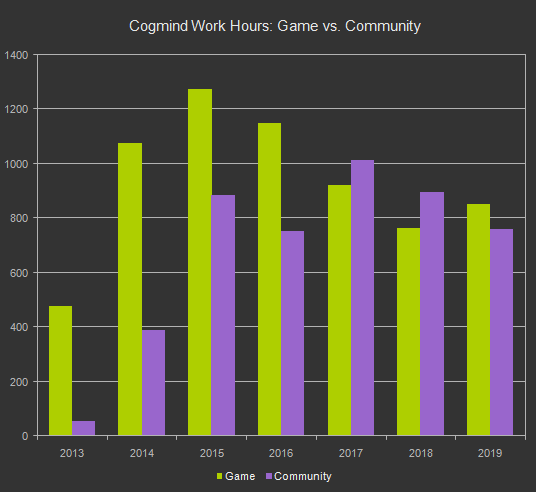 Comparing the amount of hours directly spent working on Cogmind vs. community-related work
(excludes hours that belong to neither category).

This year I mostly faded out the SITREPs which had been a staple of the announcements board since the Steam release, just occasionally writing one instead of consistently producing several per month. They were a lot of fun, but also a ton of work to put together, seemingly more than they were worth in terms of gains in other areas. Either way, I was kinda burnt out on them and wanted to shift more time back into development itself, and as you can see from the graph that trend has been successfully reversed. In 2017 and 2018, more time was spent on what I call “community efforts” than on coding and adding content to the game, but this year those efforts took a back seat as I was able to focus a greater portion of my time on the latter.

Despite the relative lack of SITREPs, I’ve definitely still been writing! There have been more blog posts this year than last (with even two more already complete ones I have yet to publish xD), funded in part by support on Patreon, which I’ll get to later.

Content that might have been given a cursory treatment in a SITREP is instead given a thorough design analysis on the blog, so we have things like the Ultimate Roguelike Morgue File series, a level design deep dive, several system-focused articles, and many others (the sidebar on the blog makes these easy to find chronologically).

I’ve also continued streaming, including earlier this year putting out a Cogmind: Pwning the Early Game video which has helped a lot of people improve their skills, so maybe check that out if you’re just starting out and having trouble reliably reaching the mid-game.

Aside from participating in all of this year’s timed special events, I also completed about five separate regular runs each using different tech or styles of play. 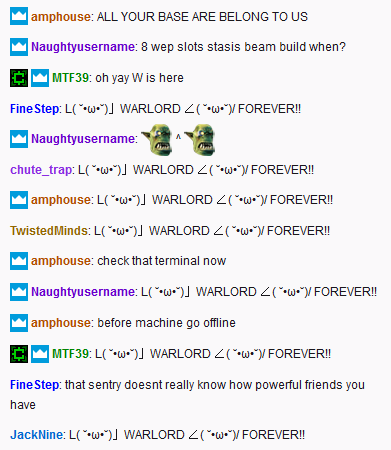 We’ve been having some good times :D

Back in March I took time out from development to help review 7DRLs, where I streamed most of the playing part of that process.

Naturally the highlight of making a game is to, you know, actually release playable stuff, so yeah we had plenty of that, too :) 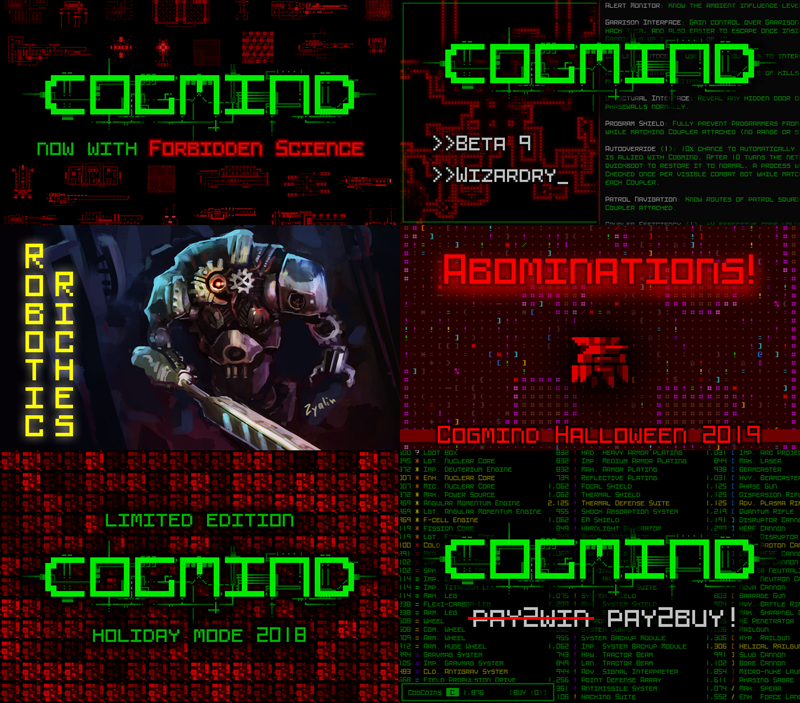 By necessity the frequency of major releases was lower this year, but the two big ones were really big:

Last year was the first time I’d ever held a timed event for Cogmind, just on a whim, but it was pretty neat so this year I’ve been doing more of that with bigger and crazier ideas. We’ve had another three of these since!

I wrote articles about designing these modes on the blog, and have no doubt there are more special events to come… no doubt at--oh my, look what month it is! ;)

In terms of regular features it’s been quite a full year, giving us the brand new but already much-loved “siege mode” mechanics for treads, an improved manual hacking autocompletion system (voted for by patrons), rebranded difficulty modes, colorblind accessibility options, Stream rich presence, and a ridiculous amount of QoL features. Basically way too much to list here, but that’s what changelogs are for, and you can of course check out all the relevant release notes for info and demos if you missed something.

How are we still going strong after all these years? You! I very much appreciate the support Cogmind and my work have continued to receive, both financial and otherwise.

Part way through the year I decided it was time to start a Patreon (announcement) to help see us through the end of Cogmind beta and also gradually build it up so that by the time Cogmind is finished we have a decent supplementary source of revenue to continue enabling a broader range of work rather than focusing so much on commercial concerns.

Sure there are the transactional perks like guiding some aspects of development through voting and trying out new features in advance, but I prefer to emphasize that it’s more about taking some of the risk out of an inherently risky business to keep it both creative and sustainable.

Anyway, in last year’s annual review I mentioned I was getting worried about revenue, but that has successfully stabilized for now, in part thanks to Patreon which has made up for inevitable lower sales over time. “If only” I was one of those devs who more quickly releases smaller/medium-sized games (even sticking to projects that take a year or two would mean I’d have several out there already!), but I’ve always been more of a big project kinda guy :P. Besides, there’s something to be said for megaprojects as long as there’s a strong community behind it and the design fundamentals are solid!

Outside Patreon, special thanks to PlasticHeart, Reed, Matthew, Karl and others for your donations this year <3

Just a few weeks ago after more than two years of collecting reviews on Steam, Cogmind finally got enough of them at the right ratio to achieve the relatively rare Overwhelmingly Positive rating! 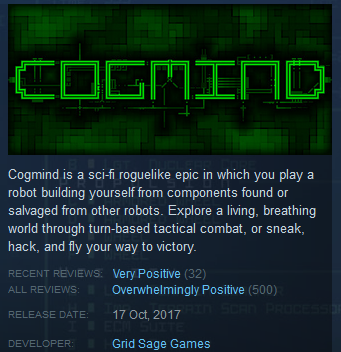 As promised, this means I’ll be adding a significant expansion around a new “Merchants Guild” faction. And now that we’ve hit that goal, I’ve already set the next one: if we can maintain this rating up to 800 reviews, I’ll also add a new derelict community.

The concepts for both expansions are fairly fleshed out at this point, but building either/both will take quite some time. I’ve also even added a third but smaller expansion as a Patreon goal… As I see it there’s still room yet to liven up the world even more!

It’s that time of year again when IndieDB does its Game of the Year voting, and although Cogmind is too niche to pull the numbers necessary to compete against mainstream titles for the Top 10 in the second round, for the past five years in a row we’ve made it through the first round of voting to take a spot in the Top 100 list. 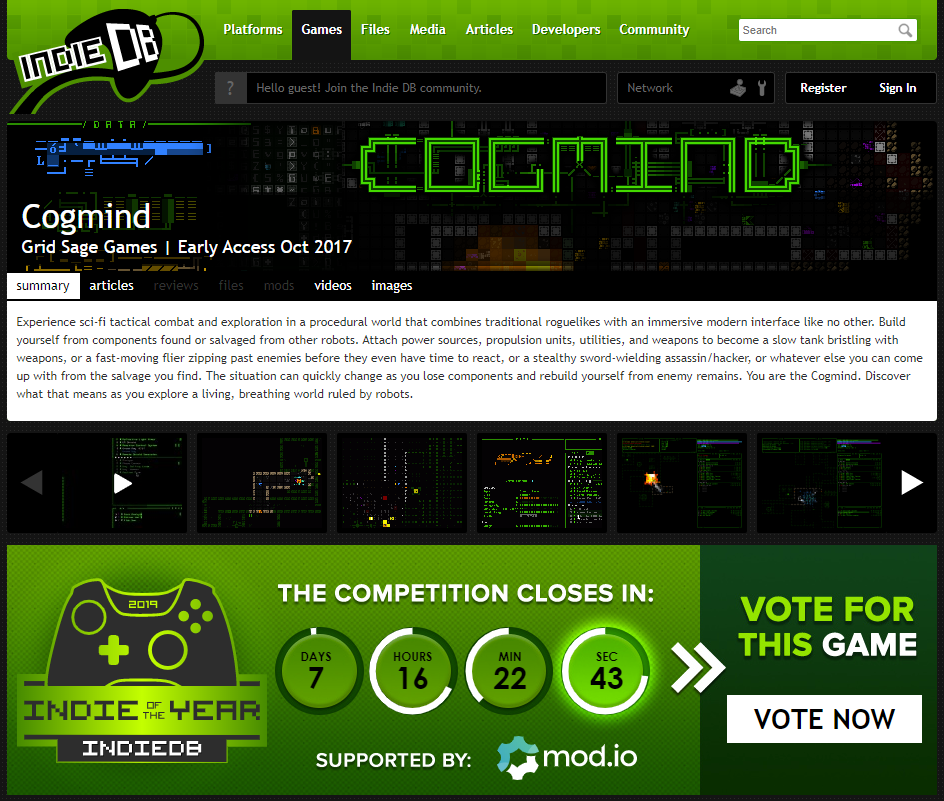 So if you have a chance give us a vote there, along with all your other favorite roguelikes/indie games that have a page on the site. (Registration isn’t required, but if you do have an IndieDB account you can maybe win a key for one of many different games if interested.)

Well, I originally said I’d like to reach that stage in 2019, and apparently it didn’t happen! We are really close, and it’s been within reach for literally all of the past year, but I’ve been working on fine-tuning or expanding other parts of the game anyway and in hindsight I think that’s been a good use of time given the results. This is especially true with regard to improving the early game and new-player experience by rebranding the difficulty modes and adding the Exiles/FarCom, plus many other related features--going 1.0 brings in new players, and naturally we’d hope that experience would be a good one.

The current state of the development roadmap from the FAQ (snapshot from 191112).

As per the roadmap, the only remaining feature absolutely necessary before 1.0 is to finish the audio, which should be a focus for the upcoming Beta 10 depending on how much else I have to get done before then. In other words, it’s getting harder for me to postpone 1.0 :P

That said, 2019 ain’t over yet, we’ve still got a few weeks here to do something with…