Posted by Michal.Marcinkowski on Oct 25th, 2011

This is the largest update we've ever done. So much new cool things to do! Please read this whole post so you're not confused by the changes.

First watch this video for a really brief run through the new features:


Of course that is not all. One of the main gamemode improvements is the addition of UNIT COUNTERS. On the top of the screen you'll see a team unit counter. Everytime you die, this counter decreases. Once the counter is depleted nobody on your team can spawn any longer. The team that kills all enemies on the counter and all remaining ones wins.

All the main combat mechanics have been changed and improved. Until you jump to conclusions please spend some time playing the game and actually seeing why this happened. The majority of time spent on this build was actually play testing. For every nerf there is actually a buff for each class. The addition of arrow workshops disrupted the games balance leading to many changes. For example:

The catapult arc and firepower has significantly changed. You'll need to get a lot closer to the walls to destroy them. However you can pick up the catapult and bring it closer!

As you've probably seen on the test videos, you can now put anything into the catapult and launch it (not corpses but that is planned as a feature).

NEW CONTROLS
As a reminder. The controls are very much changed. All things to a degree, are controlled with pie menus. Pretty much like the blockmenu. So press the menu button and hold it. Hover over the pie slice (button) and release.

COIN ECONOMY
We have now coins. You get coins for doing useful things for your team.

CASTLE ROOMS / WORKSHOPS
You spend the coins to buy bombs, arrows and heal in the quarters. 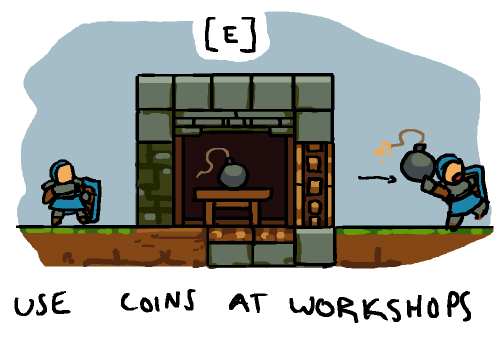 PICKING / DROPPING / MOUNTING
Pickup items with [C] or by holding [C] and selecting from menu if there is more than 1 thing to pickup in that spot.

Some items (like stone/wood for builders) are picked up automatically, others are not. 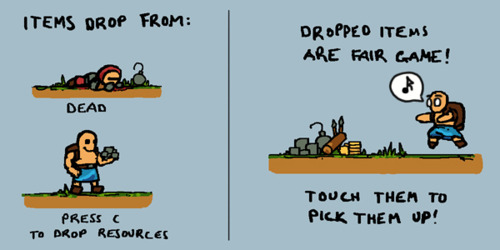 You can mount objects (like bombs or other catapults) in a catapult by holding [E] on the catapult and selecting the Mount Item option.

I probably forgot about something, this a really big list of changes. Read the change log for details:

Knight:
- knight double slash only works when actually hit somebody
- knight shield up works more like a ladder
- knights can glide on shield up (shield parachute)
- fixes to shield collision
- less knockback on sword hits

Awesome update guys, still cannot connect to any servers though which is a major bummer!

Servers are fixed, try now!
Sorry got a huge load of people, which is good I think :).

Keep up the awesome work you guys! I'm a proud Premium member!

Always nice to have support!

I miss looting option. Lads exploding with stuff makes everything messy. The richest guy dor now is the guy at the frontline, and he can simply die and lose everything.

Awesome update :)
Keep it up!

Of course we will ;D