The goal of the game is to build castles and watch your enemies crumble.
- Play as a Knight, Archer or Builder
- 64+ people real-time Multiplayer
- Mine resources and construct Siege Machines
- Zombie Fortress single and multiplayer - fight for your life and survive as long as possible!
- Full CTF mode with advanced workshops and gameplay elements
- Fully collapsible 2D Physics

KAG was coded and designed by Michal 'MM' Marcinkowski creator of the online 2D action classic Soldat. Co-designing and painting all the pixel graphics is Max 'Geti' Cahill from 1bardesign.com games. Additional development by Tom 'Shadlington' Robinson and Ryan 'FliesLikeABrick Rawdon. Music is being composed by David Pencil composer of Penny Arcade. It was started in 2011 after being inspired by Soldat, Minecraft, King Arthur's World for the SNES and Ace Of Spades.

View a picture TUTORIAL of the game to learn the basic.

On Mac OSX run the game through WineBottler.

"I love the exploding pixel-bodies!"
Bene

"This game if fu**ing awesome, fun and addictive"
Léo Razbinski

"it's everything I've ever wanted Minecraft to be"
keymax

"A mix of Minecraft, Terraria and Dwarf Fortress, and it's free!"
Jase Robinson

"Most addicting thing on the net!"
KoEDeath123

"I am your father"
Darth Vader

Quite a few things, all of them somewhat minor but definitely worth mentioning:

A small compilation of gifs that didn't make it on the front website of King Arthur's Gold.

King Arthur's Gold has new tutorials teaching you the basics of the game. You can target practice on chicken. But you can also farm them and glide while...

The Shinobi Complete Game File. Rule The Lands In The Name Of Honor And Justice.

unvelibable... here they sell the game at 25USD... go check out the steam store naaaaaw!!!

i tried the demo to possible buy the full version... but not works :( its appers Major updates avable :(

Same.. the creator needs to take a look at :I.

Indie of the year !

This game is worth every red digital cent.

This is just a damn nice multiplayer game!
Of course a lot can still be added, but at the moment it is just great.

Keep adding stuff, and people will continue to play, because of the possibilities, team work and nice game play. 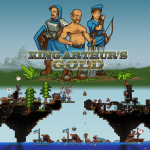