A summary of the planned bosses into our tactical RPG, and the pixelart we developed about them.

WIP for Belphagor, Lord of the Gap (Summon)

My collegue Luca is on the otherside of the planet to follow a main project for his company, and my third kid has born in Dicember, so we’re quite busy but nonetheless we’re still working hard on Wizards of Unica! Have you already tried our Alpha 0.2 ? If you don’t please download it here, and share with us your feedback! 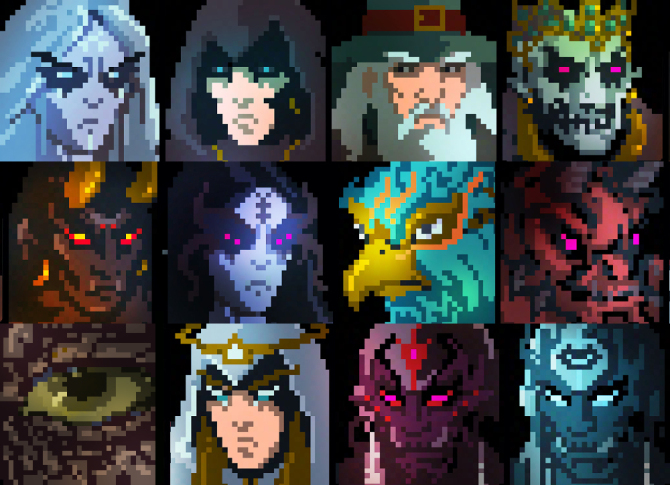 WIP for all Wizards of Unica Bosses’ avatars

My post today is a summary of the planned bosses into our tactical RPG, and the pixelart I developed untill now. In the past I shawn you many of them, but I think is wise to put ’em all together in a single post, and explain a bit more which is our prospective for bosses into our game.

WIP for Auriel, Flame of God

1 – We like classic bosses: a unique enemie at the end of every stage, hard and tough to beat, but easier if you find the right approach and strategy. Every one of them will have totally different tactics, from a simple “take him down”, to a “steeplechase”. Some powers you previously gained from other spirits could be resolutive, or help you against the legions the boss will recall against you…

2 – Exotic flavor: every stage and its related boss will have a specific inspiration from world wide real folklore myth, from the Windy Canyon of Indostan to the Whisper Ruins of Bizantium… The full list is almost finished and the bestiary is growing.

WIP for Garuda, The Mount of Vishnu

3 – I told you we’re classic: you have to crush personally every boss, and crush many times the final boss. We really missed a final confrontation with the real bigbosses in great AAA title like Batman Arkham Asylum or Max Payne III. We want the player to sweat to blood to reach the final opponent and finally smash him with all his strenght if he’s able to!

4 – Every boss will have his own personality: so you will have to face the satirical laughing genius of Belphagor and the misandric depressed femminility of the Yuki Onna. And now that they are in your party, you could regret to dominate a certain Spirit. You survived to his vampire touch and deadly phantasm, but could you survive to the logorroic old fashioned poetic speech of the Brucolaco?

The Spirits are so being developed, and soon you will be able to fight against one of them to test it. By now, enjoy our alpha and please share your opinion.

And sure, if you like the work we’re doing please consider to make us a donation or just offer us a coffee for give us the boost and help us to make a better, bigger, harder game!

That look badass and gorgeous ! Can't wait for the next update!

Glad you like it Biffy! You will get our news very soon! :) Stay tuned!