Post news RSS Devlog #1 - What is our new game?

Hello World! Today we are sharing some of the work we've been doing for our most recent project. We'll talk a little about what our game is and the various decisions we've made about it's development. Before proceeding, please note that this game is currently in development, meaning that the content shown is subject to change!

Posted by redoakgamestudios on Mar 31st, 2020

What is our game in a few listed bullets? 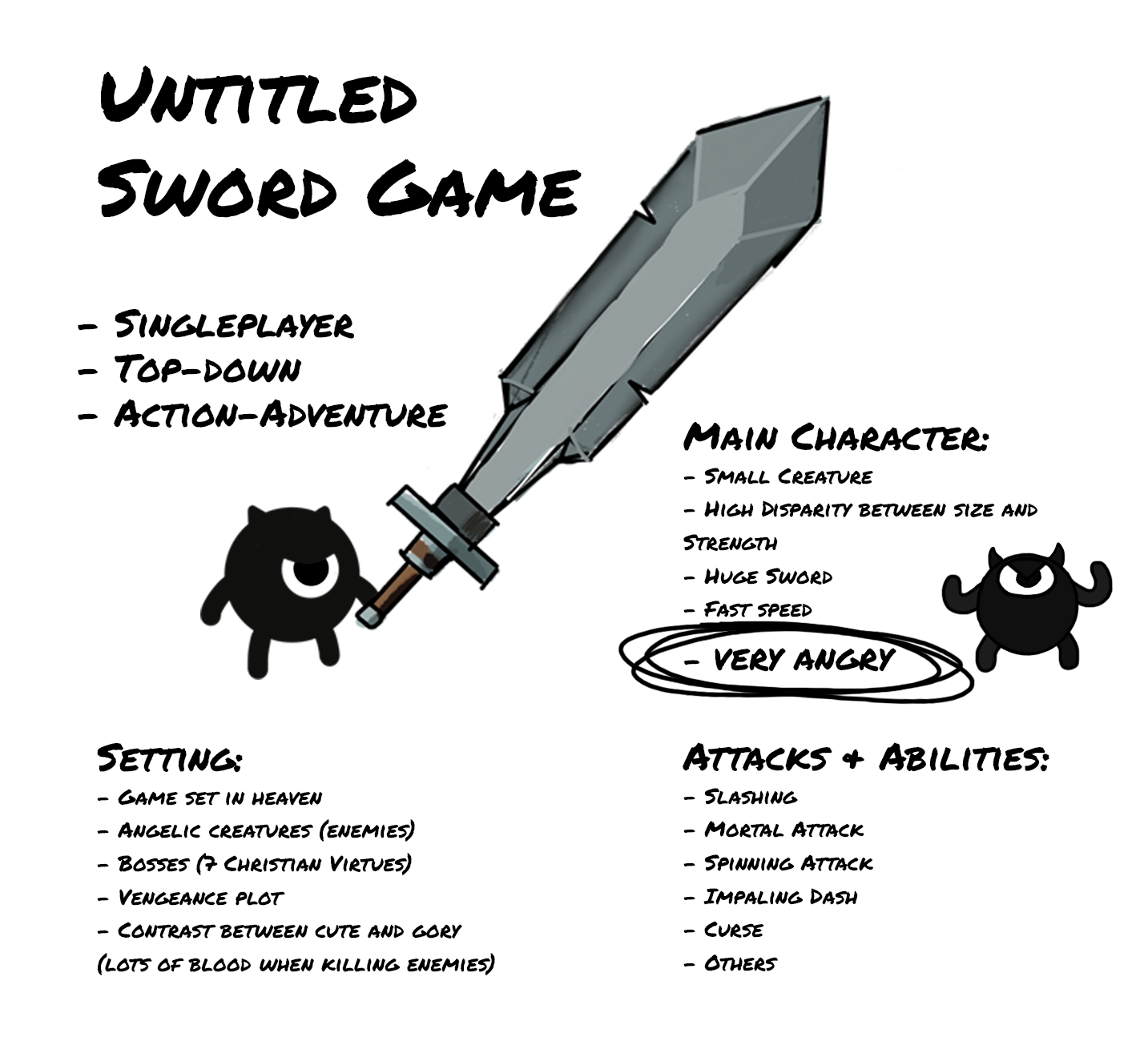 The basic info about our game is pretty much all covered in the image above, but we'll go into more detail in this article.

For now we are referring to the game as "Untitled Sword Game" but note that this is merely a temporary name, which we will replaced when we find an official one. 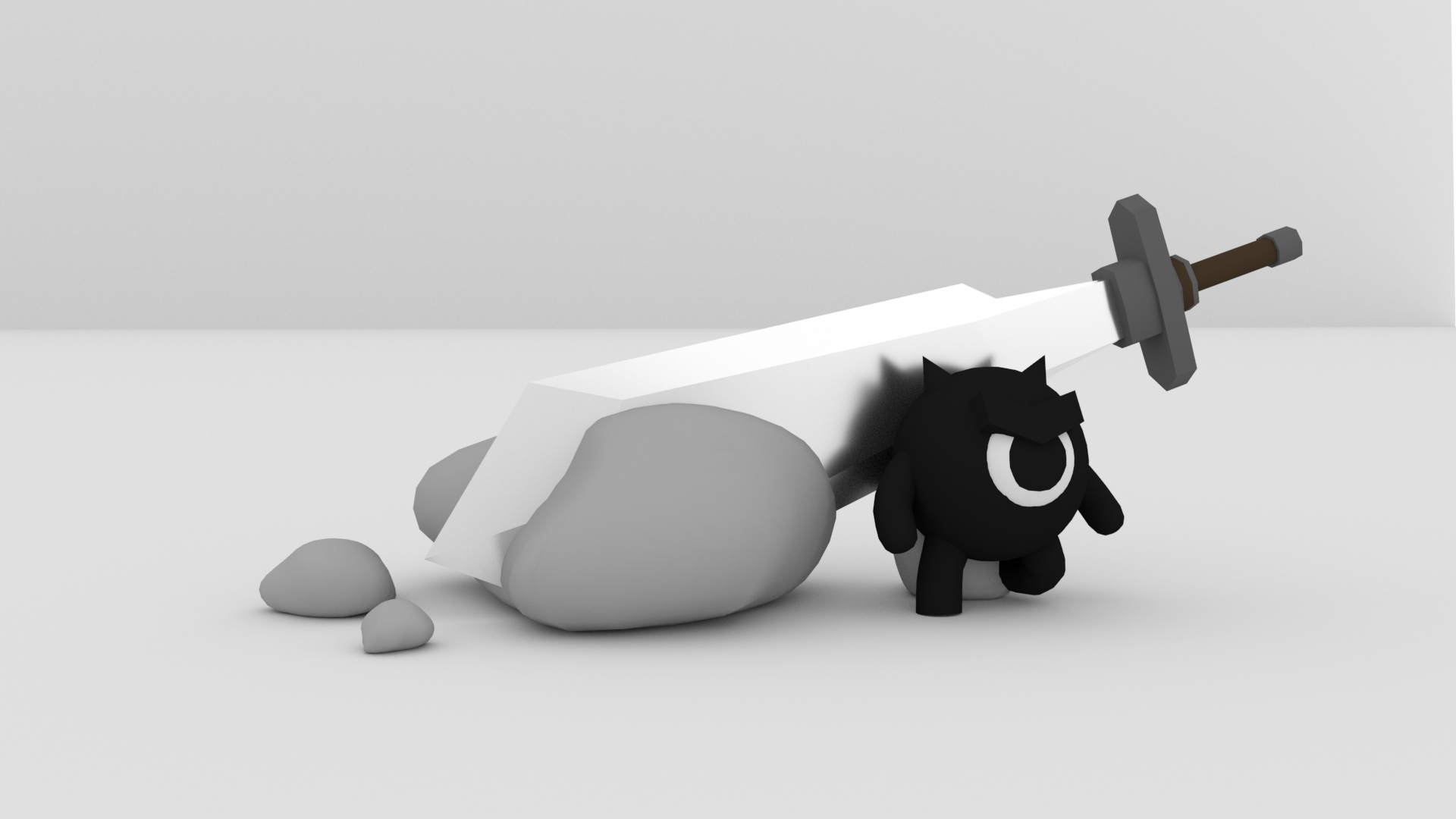 So, this game is being developed by Redoak Studios, a team made of 4 members, as a project for class in Universidade Lusófona de Humanidades e Tecnologias, located Lisbon. We are used to do a little bit of everything but for the first time we have distributed different roles (such as programming, modelling, animating, etc) between us, to maximize our work efficiency/productivity.

Our entire game revolves around the main character's sword, which is huge compared to him. All of the gameplay will concentrate on what you (the player) can do with it. You can use the sword to:

There are also other forms of interactions such as buttons and levers which are used in puzzles and also lead to direct changes in the world.

Our game focuses heavily on combat, which means that we need a good combat system in order to make it fun.

You can perform simple slashes by pressing the attack button. If you slash 3 consecutive times in a short period, the last slash is replaced by a special attack, which can be one of two - Mortal attack and Spin attack. 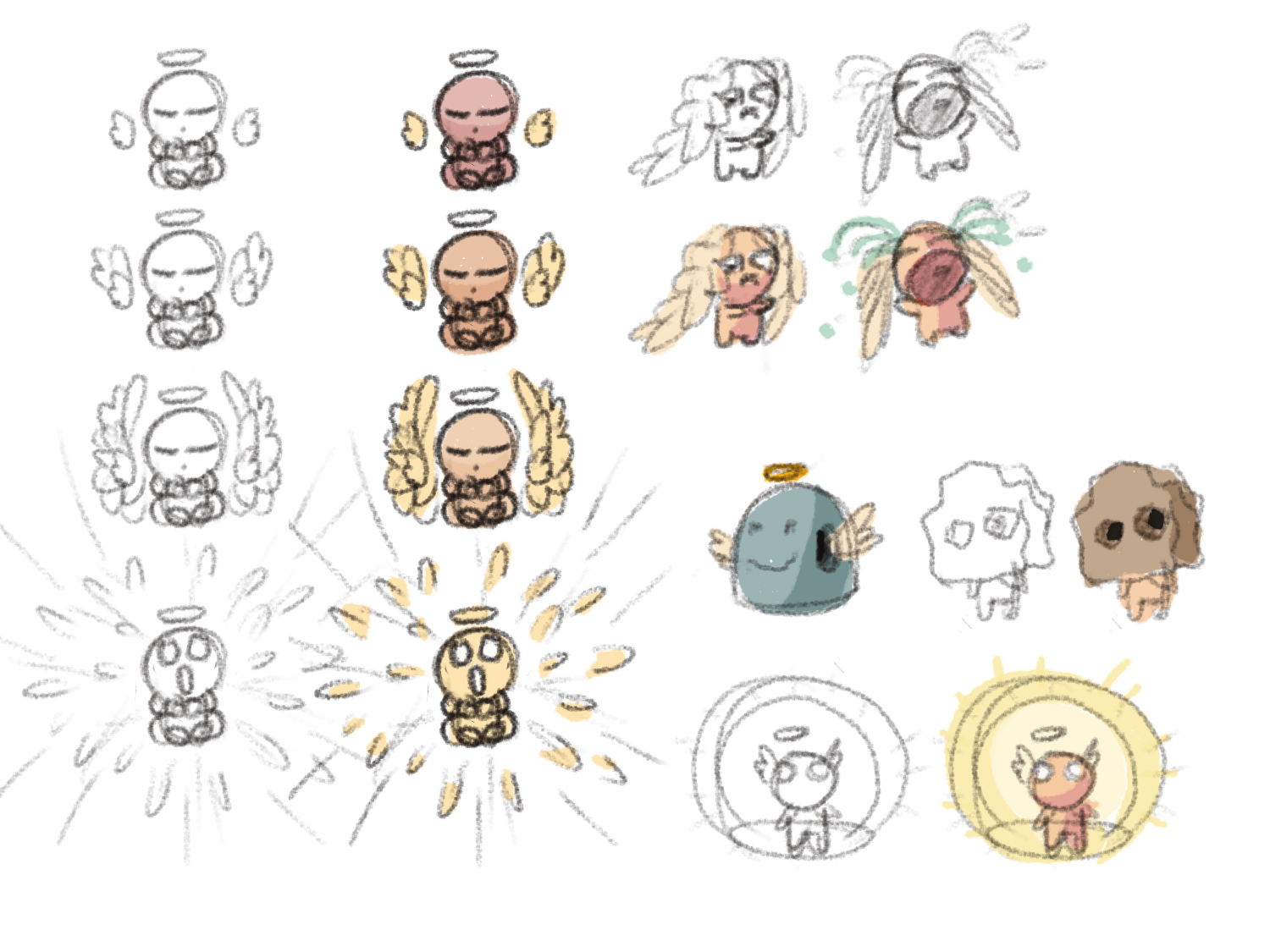 Since we focus a lot on combat, there are a few different enemies in our game (you can see some concepts in the picture above), to add depth and variability to it. Like in most games, each of them has unique characteristics. Right now, the enemies we have are: 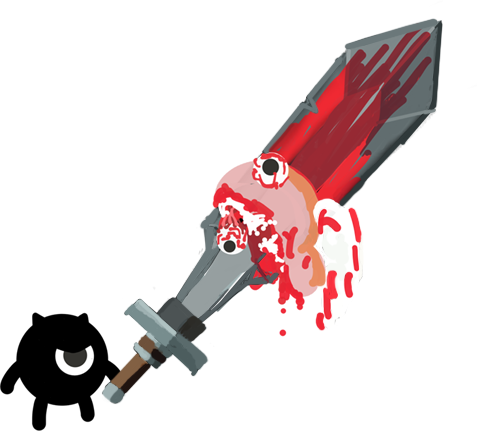 Impaling - one of the most unique features in our game is the fact that you can impale enemies in your sword, which then has diverse applications. Having an enemy on the sword will affect the special attacks you use, depending on the type of enemy as well. For example, if you perform the Spin attack when you have a Bomber impaled on the sword, you will throw the Bomber like a projectile, causing it to explode when it hits something. This feature allows for interactions such as blowing up a door or hitting a distant target. The max number of enemies that can be impaled is 3, which later can be upgraded to 4.

Abilities - The player as many abilities which will be unlocked throughout the game. Some examples of those abilities are: 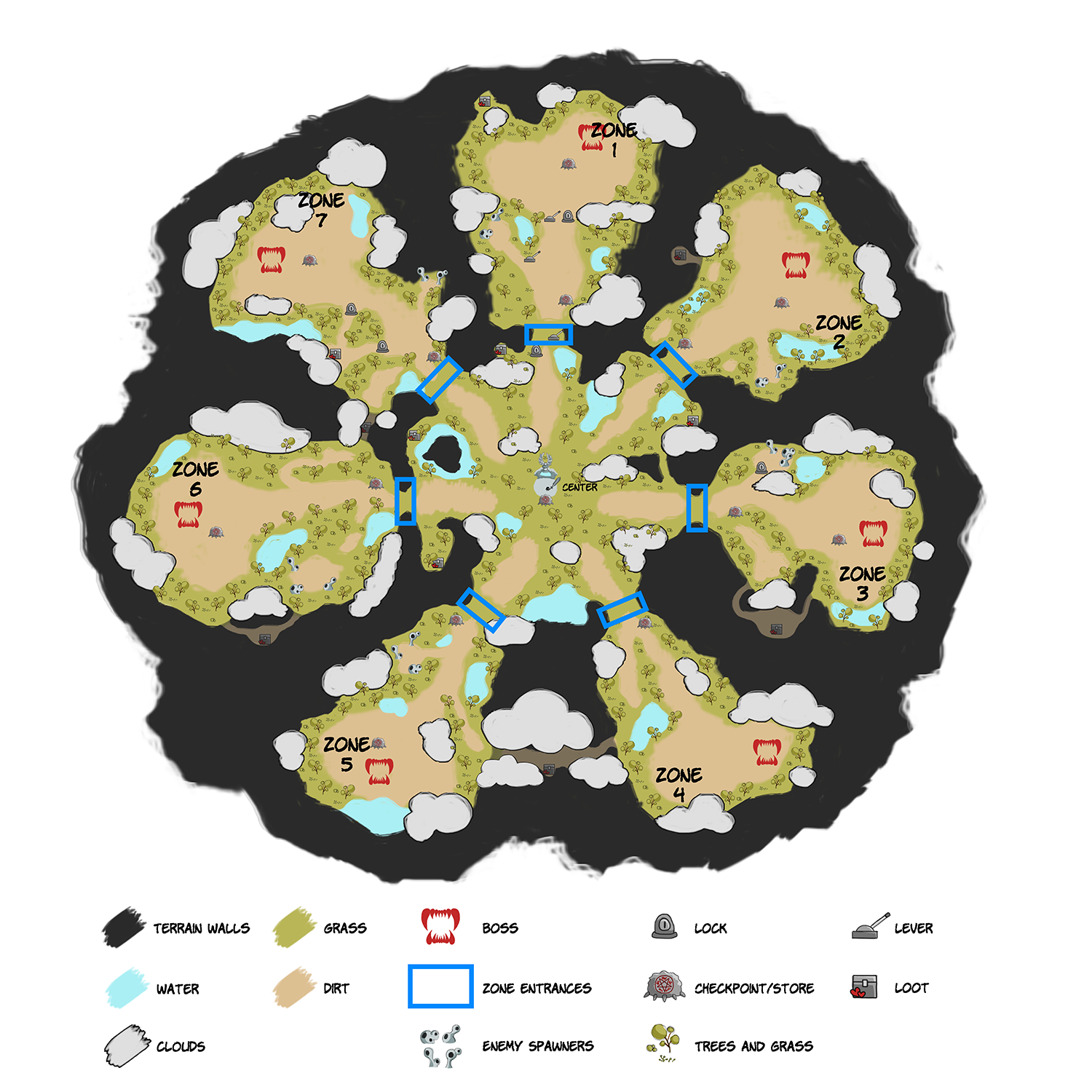 Our world is composed of 7 areas. Each of them can have multiple puzzles (necessary to move forward or to reach certain places), fighting pits (areas where there are enemy spawners and rewards after killing all of them), hidden places and one Boss.

Some zones are only reachable after the player has unlocked a specific ability, as he needs to use it to cross a certain obstacle or solve a certain puzzle.

Like we mentioned before, this is an adventure game, and like any of it's predecessors, it focuses a lot on progress. The progress in our game can be divided in two categories - world progress and player progress, which are codependent.

What do we mean when we say they are codependent? Well, it's easily explained - Initially, you will have zero unlocked abilities, which means you'll only have your basic movement and attacks. After killing your first boss, you will unlock an ability (player progress) which will allow you to access areas you couldn't access before (world progress). It will also allow you to buy upgrades in the store, at the cost of hearts (explained after the next image). 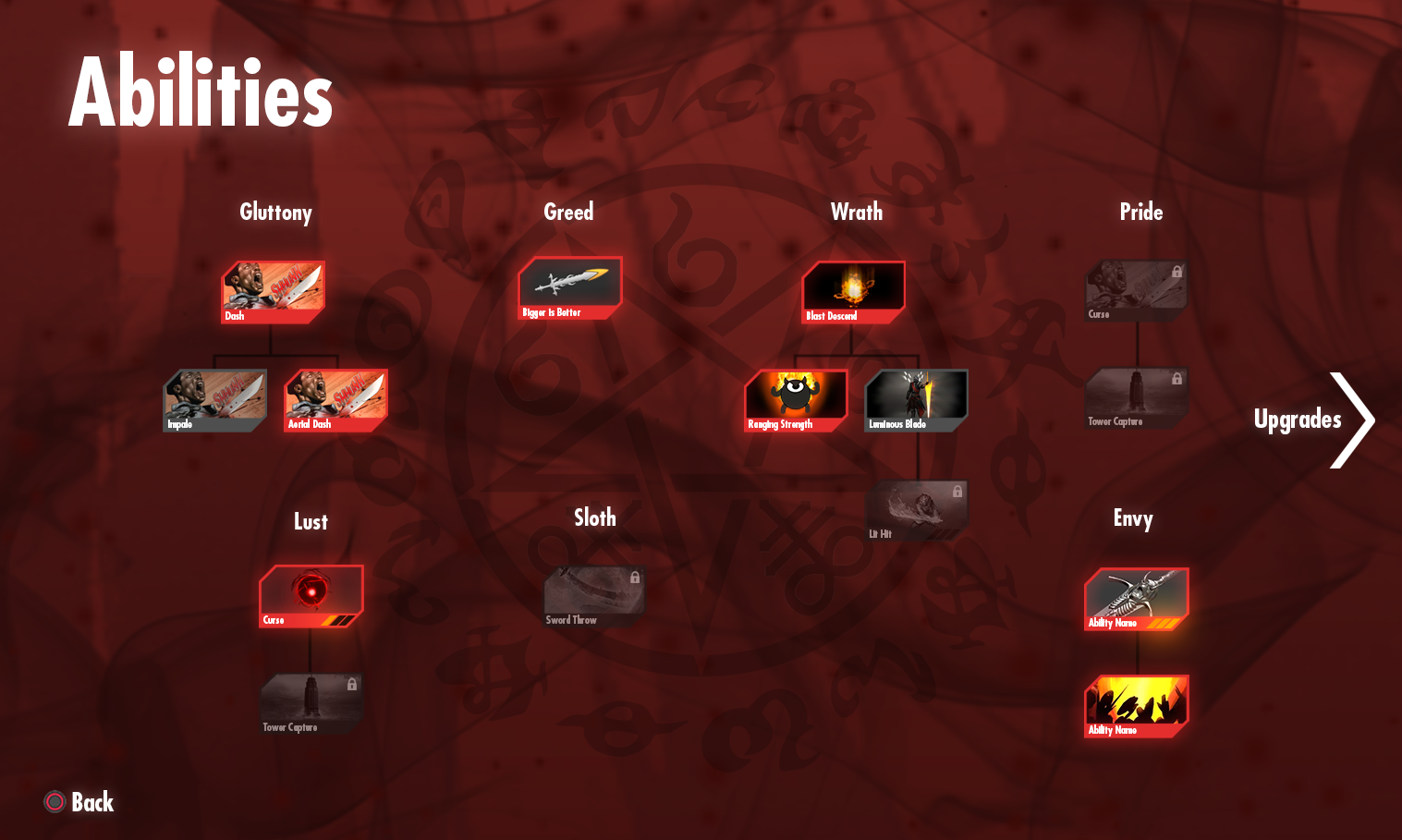 Store - The player can unlock new abilities in the store, if they are unlocked. He can also upgrade those abilities and upgrade his stats (f.e. damage dealt).

Hearts - Hearts are dropped by enemies when you kill them and they can also be obtained through loot boxes, which can be found in hidden places scattered around the world and also rewarded to you in fighting pits.

For now we haven't shown much color in this article, which might have left you wondering how the game would actually look like. Well, no more wondering, it's time to talk about the art!

For some context (and we won't go into crazy detail on this subject because we'll cover it deeper in another article), you play as a being that escaped from Hell and broke into Heaven seeking revenge against God.

So, the world you play in is actually our version of Heaven, pretty cool right? We wanted it to be a flying island, or, actually, a bunch of flying islands connected to each other. 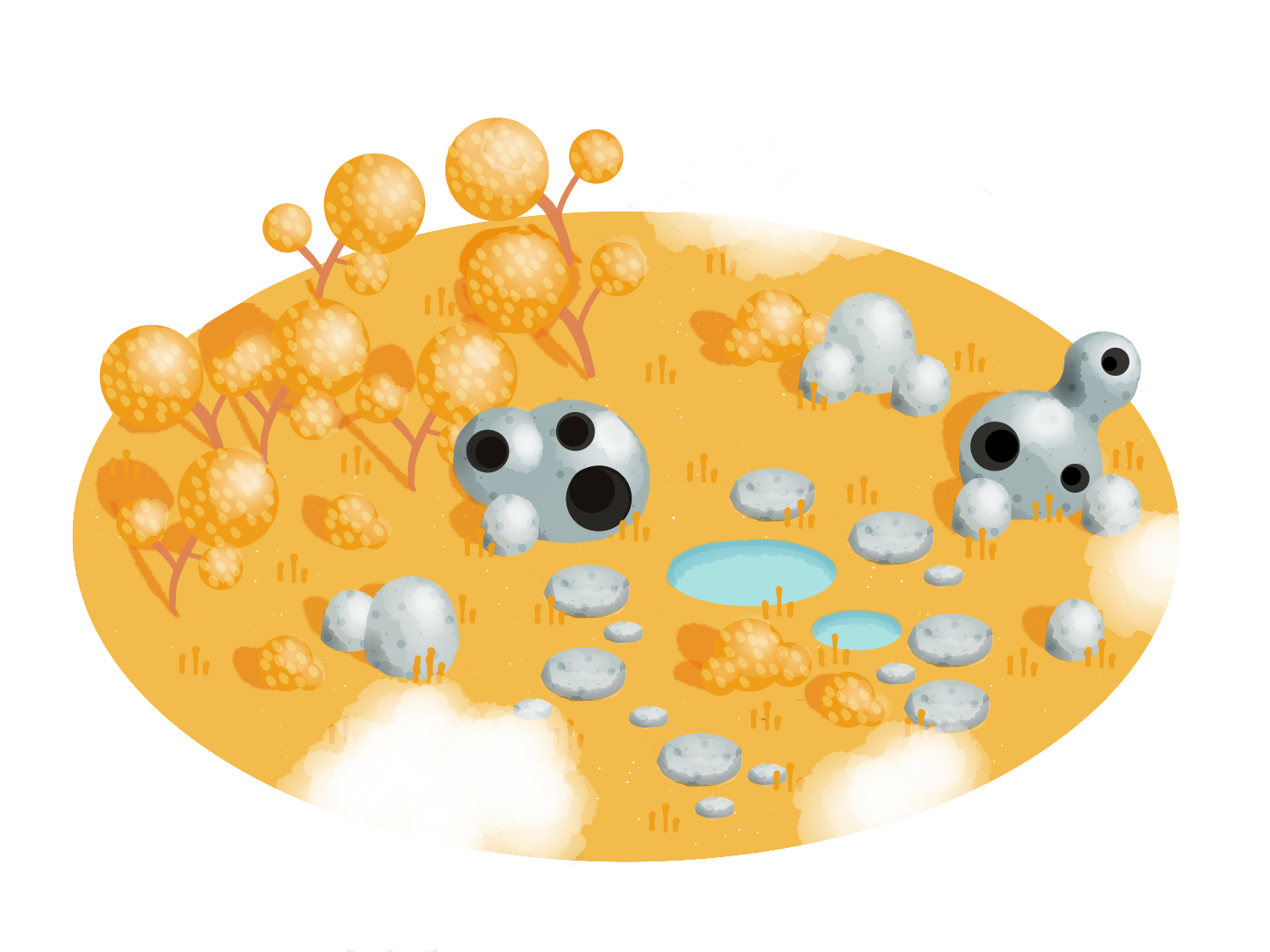 Given the context, we wanted the world to prompt that feeling of "Divineness" and to do so we came up with the idea of having golden-ish flora instead of the realistic green. There is also a lot of water, clouds and light colored rocks to maintain that clean and beautiful appearance. 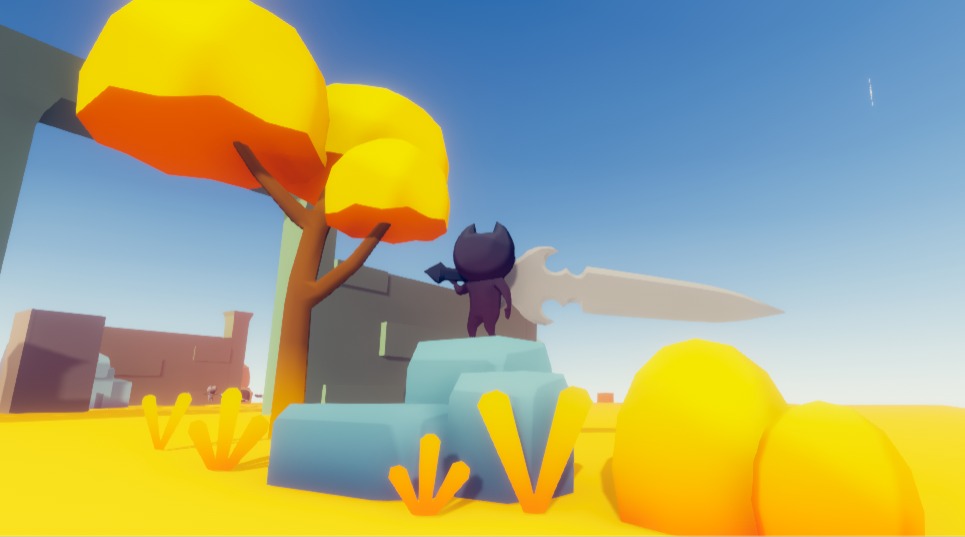 So this is a pretty early version, but you can already get a glimpse of what we're trying to achieve.

We chose to use a toon style, with smooth height gradients, which we believe looks pretty neat! The above image is the result of a color and shader study we conducted, and very likely the style that we will apply. 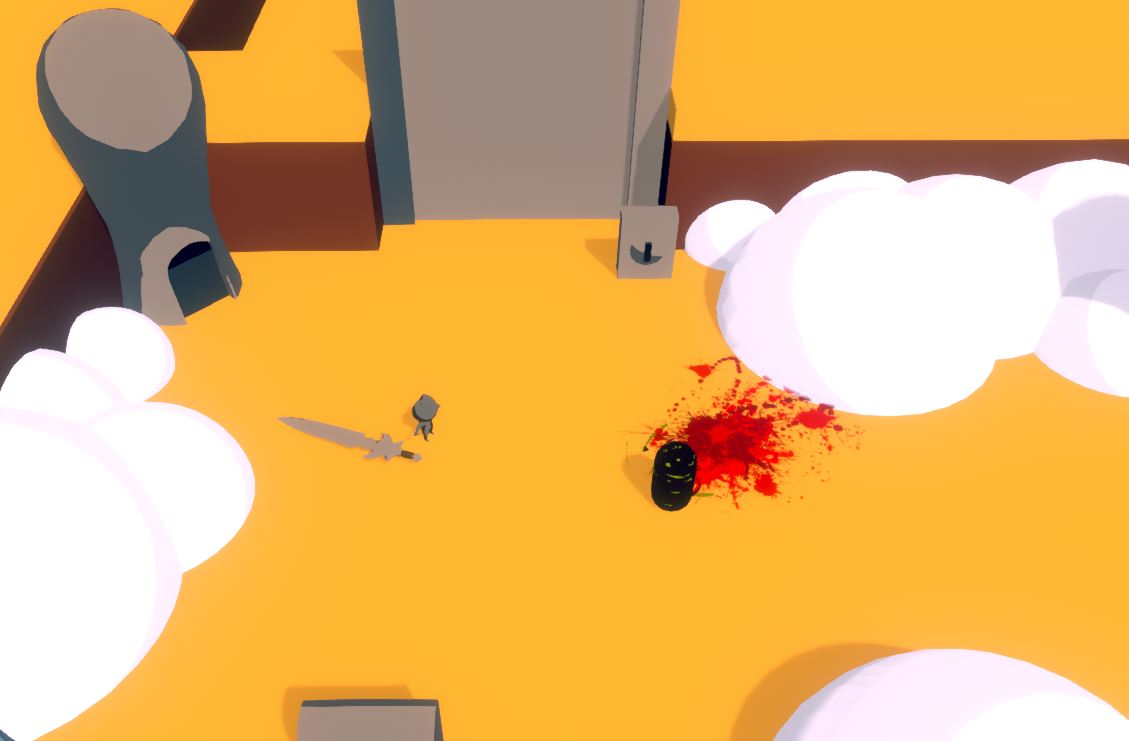 Oh yeah, there's something we really want to stand out in this game - it's gore. Since we're in Heaven, our enemies are in fact cute mythical beings that don't actually want to kill us, but instead want to make us pure. We are the evil ones. And so, since everything around us is so clean, we ought to be a little dirty. Nothing better than a sh*t ton of blood, flying limbs and guts to create a massive contrast between such a pure place and what you're about to turn it into.

We'll post a whole article on this specific subject later on, showcasing concepts, shader tests and other fun stuff.

More details about other topics such as the lore, bosses, enemies, goriness, attacks and abilities, programming, 3D models and other subjects that might interest you will be covered in future articles as well!

We'll try to post one article per week, most likely on Tuesdays. Don’t forget to follow us to receive notifications about future articles regarding this project. If you have any questions or feedback, feel free to leave a comment below!

Thank you! That's what we're aiming for! :D

soooooooooo... its not done?

Not yet! It's currently in development :)