This week we will be highlighting some awesome new weaponry for upcoming squads as well as sharing exciting news about our new Verdun map: Fort Douaumont. We will also be exploring overall game improvements.

Welcome back to the third of Verdun’s weekly “Weapon Wednesday”, where we once again tease upcoming content and provide you with an update on the overall state of the game development!

This week we will be highlighting some awesome new weaponry for upcoming squads as well as sharing exciting news about our new Verdun map :Fort Douaumont. We will also be exploring overall game improvements. 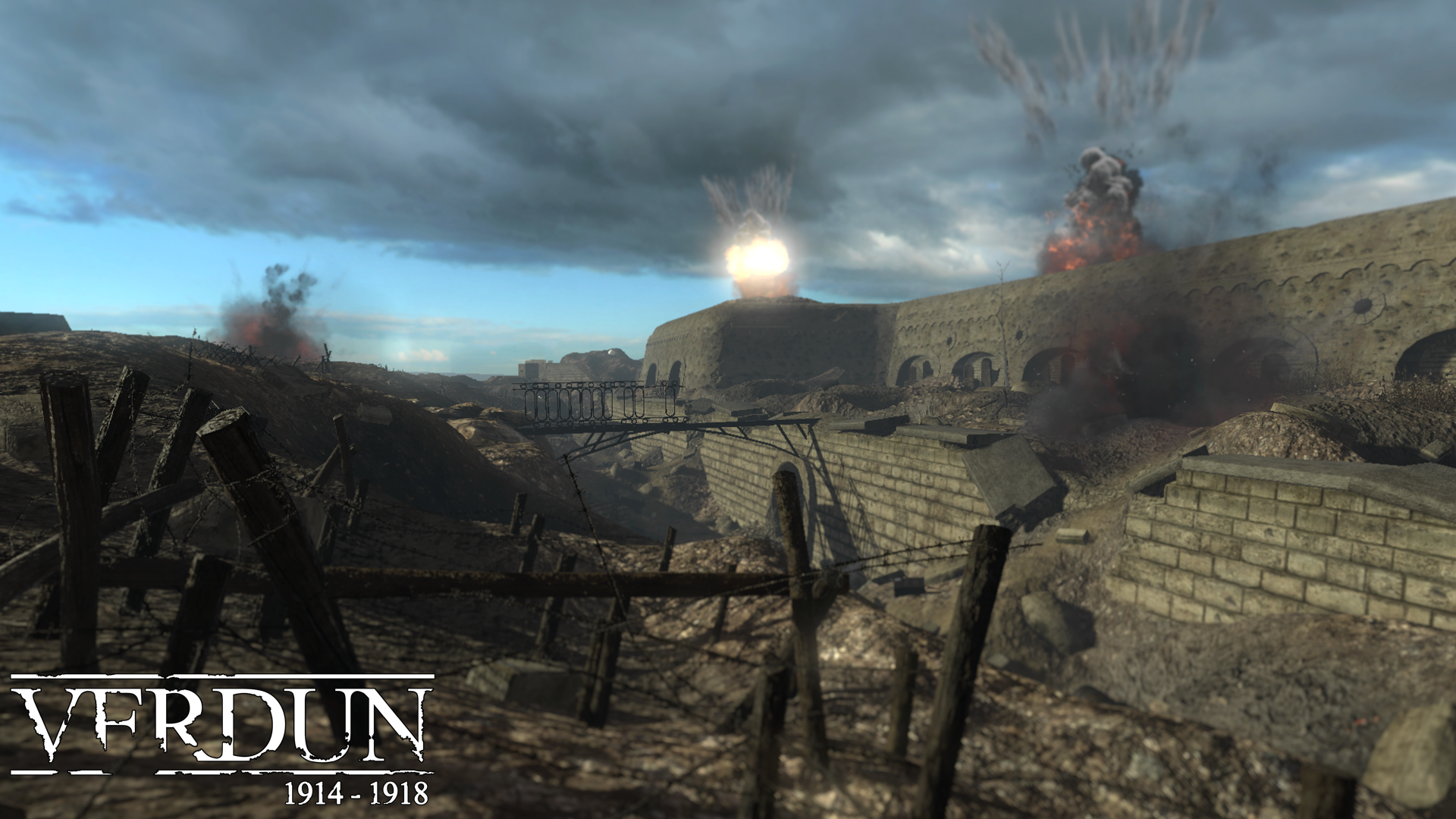 The Douaumont barracks (Work in Progress)

The Artillery luger was an adaptation of the popular and iconic Luger P08 for use by German artillery personnel for defence. With a longer barrel, wooden stock and 32 round magazine, the artillery luger would become an iconic image among the trenches of the great war - a favourite among trench raiding parties - when available. 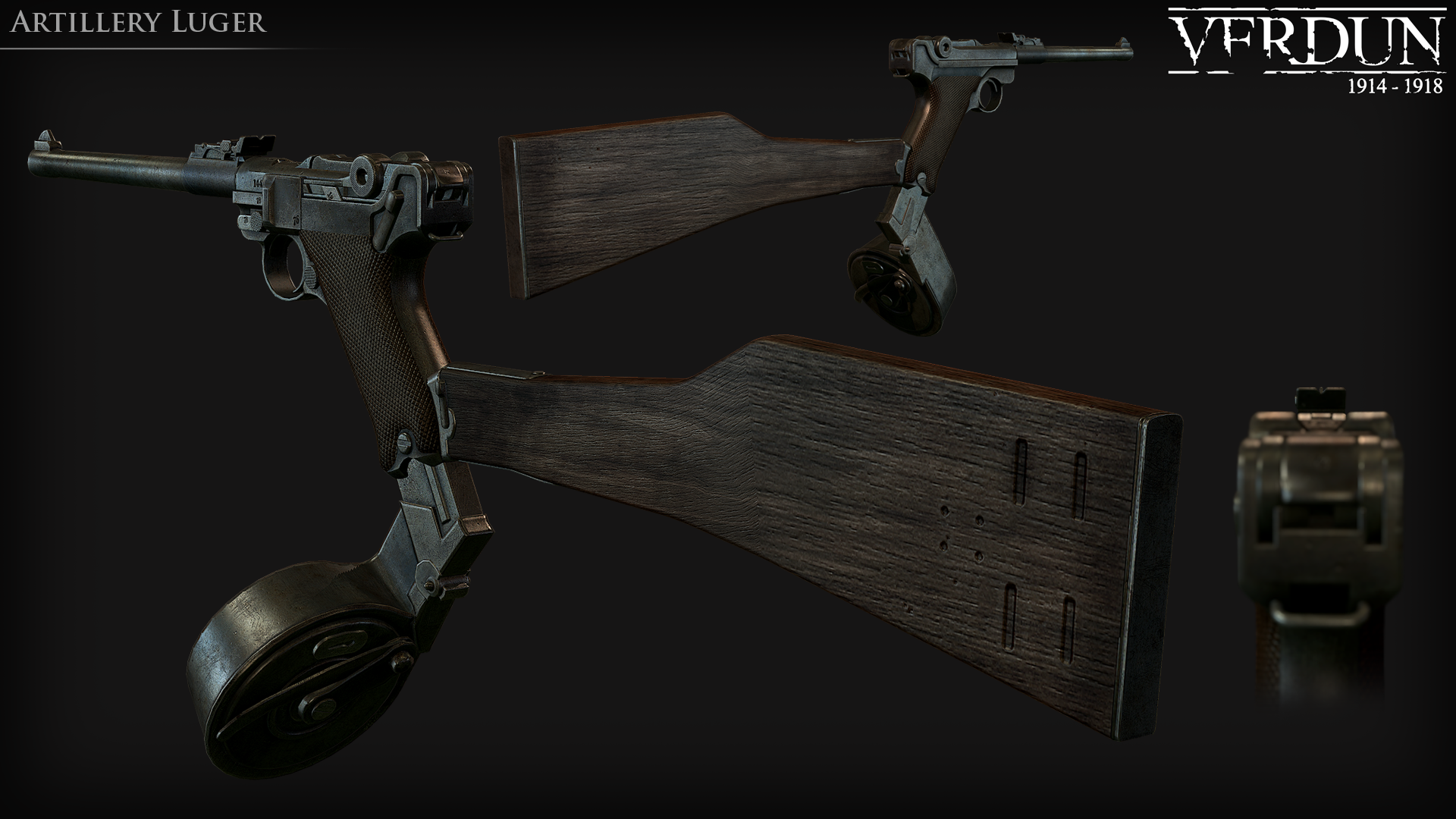 The artillery Luger will see use in German Stosstruppen and Pioneer squads. With a large capacity magazine, balance will come in the form of a longer reload and a lower amount of ammunition being given.

The famous M1903 Springfield rifle, renowned for its accuracy and reliability was loved by both the US Army and US Marine Corps. When the U.S joined the war in 1917, it was faced with a shortage of the m1903 and assigned factories producing the British pattern 1914 to produce an american version chambering .30-06 - the pattern pattern 1917. The P17 would see more use during the great war, however, the springfield was still very much so a part of the conflict. This infamous rifle would see action in many conflicts involving the U.S. during 21st century including WW2, Korea, and Vietnam. 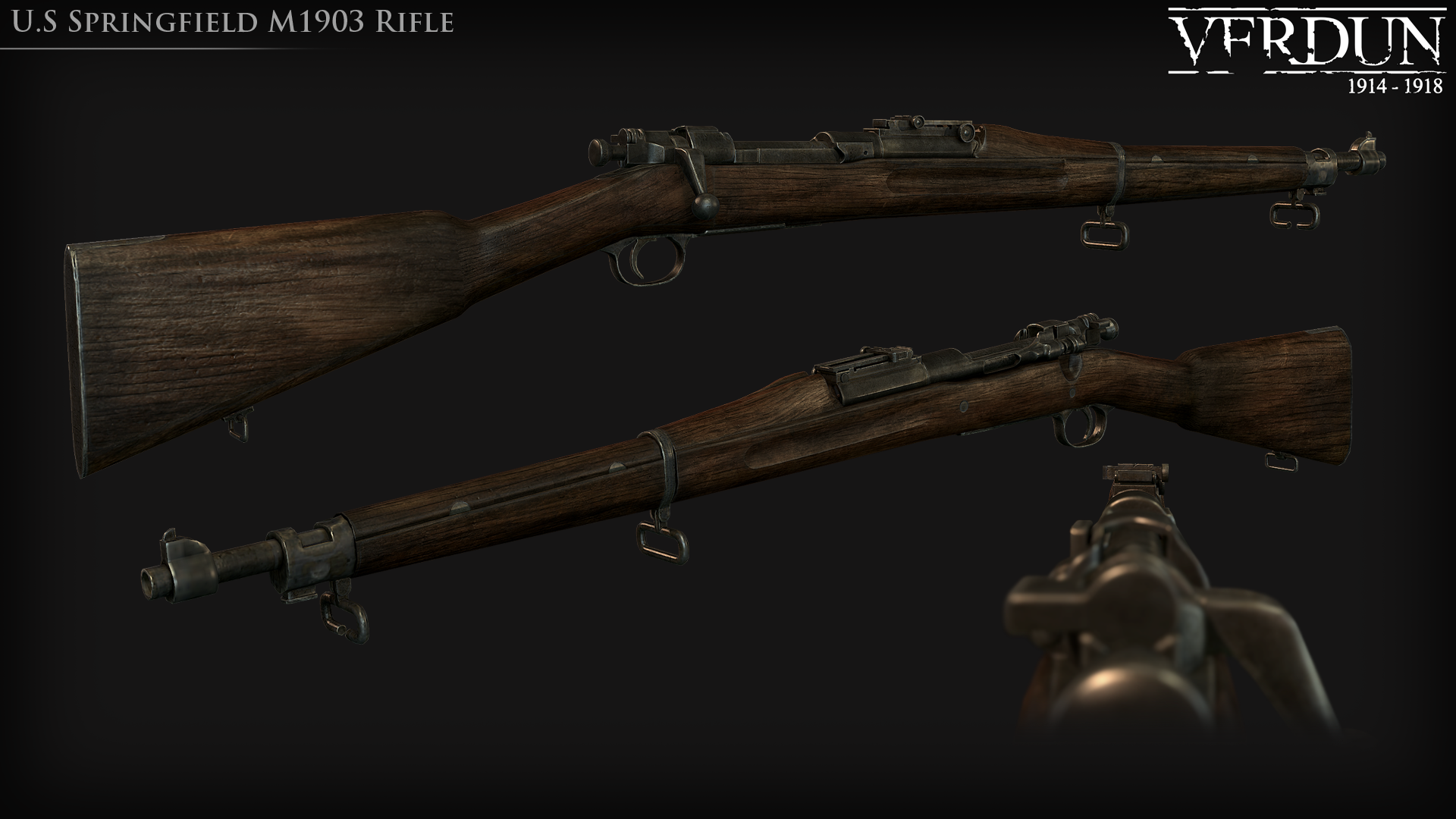 In Verdun the M1903 will see action as the standard issue rifle for the (to-be-implemented) US Marine squad, as well as an alternative rifle for the US ‘Doughboys’. The rifle will handle in a similar manner to the Gewehr 1898, in terms of balance it may be slightly faster to operate, however balance will be decided nearer the time of implementation.

The Berthier M16 was a higher capacity and slightly updated version of the M1892 Berthier mousqueton. The Berthier M16 saw an additional 2 rounds added to the capacity of the Mle 1892 mousqueton - which, while only bringing the rifle up to par with other carbines for the time (e.g. Kar98az) made for a considerable difference. 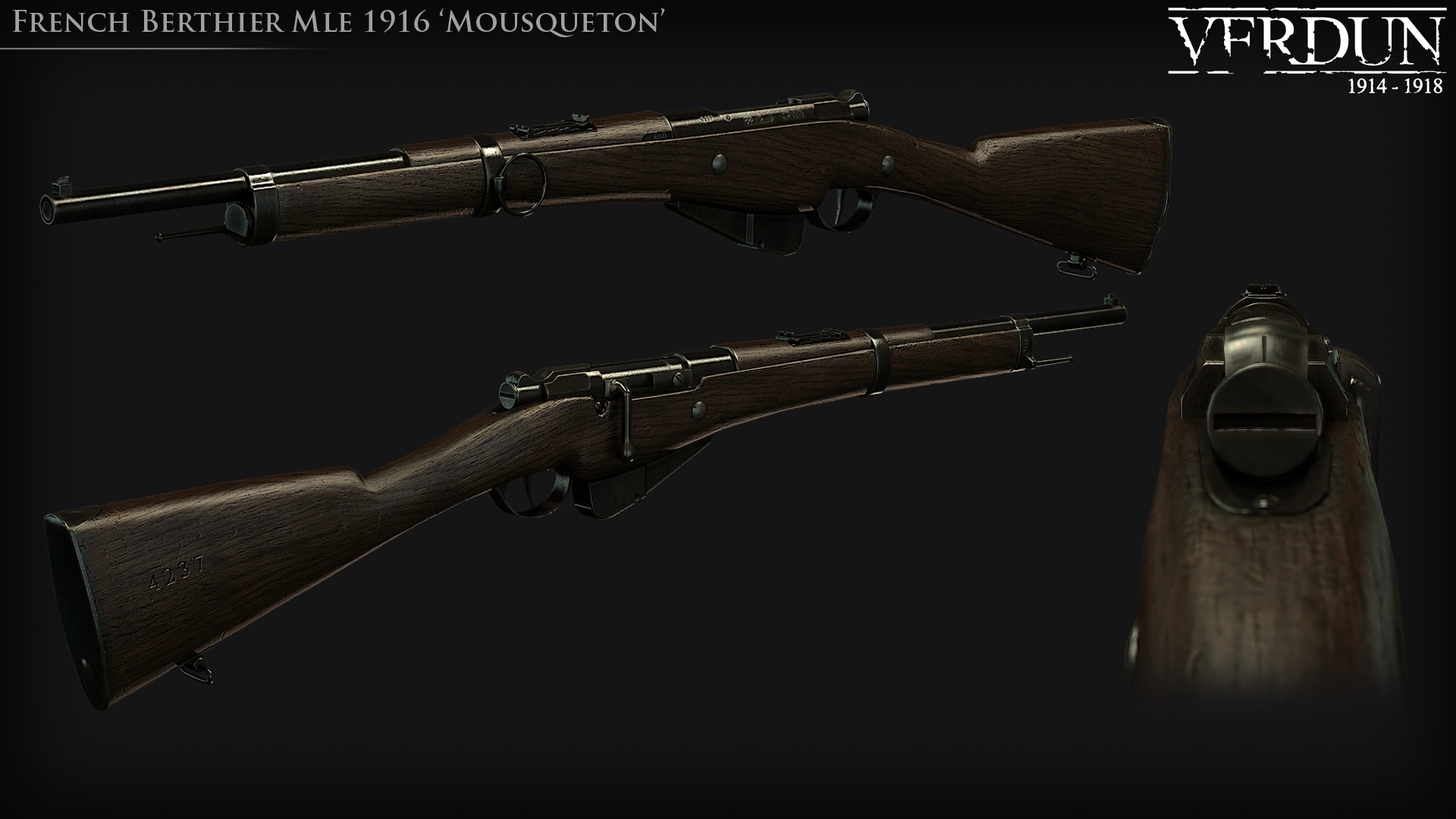 The M1916 will see little in the way of difference between in performance compared to the M1892… however the additional 2 rounds should make the rifle even more lethal in the right hands.

The Berthier M1892 was developed a short while after the Lebel 1886 as a firearm for light troops, cavalry and law enforcement. The Berthier design became popular after several colonial conflicts - in which the French needed shorter rifles. Generally in desperate need of a carbine rifle in the late 1800s, the Mle 1892 was something that was lightweight and easy to use. The M1892 was adopted and was one of the first French rifles to make use of a loading clip. Suffering from a capacity of 3 rounds, this was not too much of an issue given that the rifle was far quicker to load than the Lebel. The M1892 and M1902 Berthiers were used heavily during the Great War, as come 1914 there had been little recent production of the Lebel 1886. 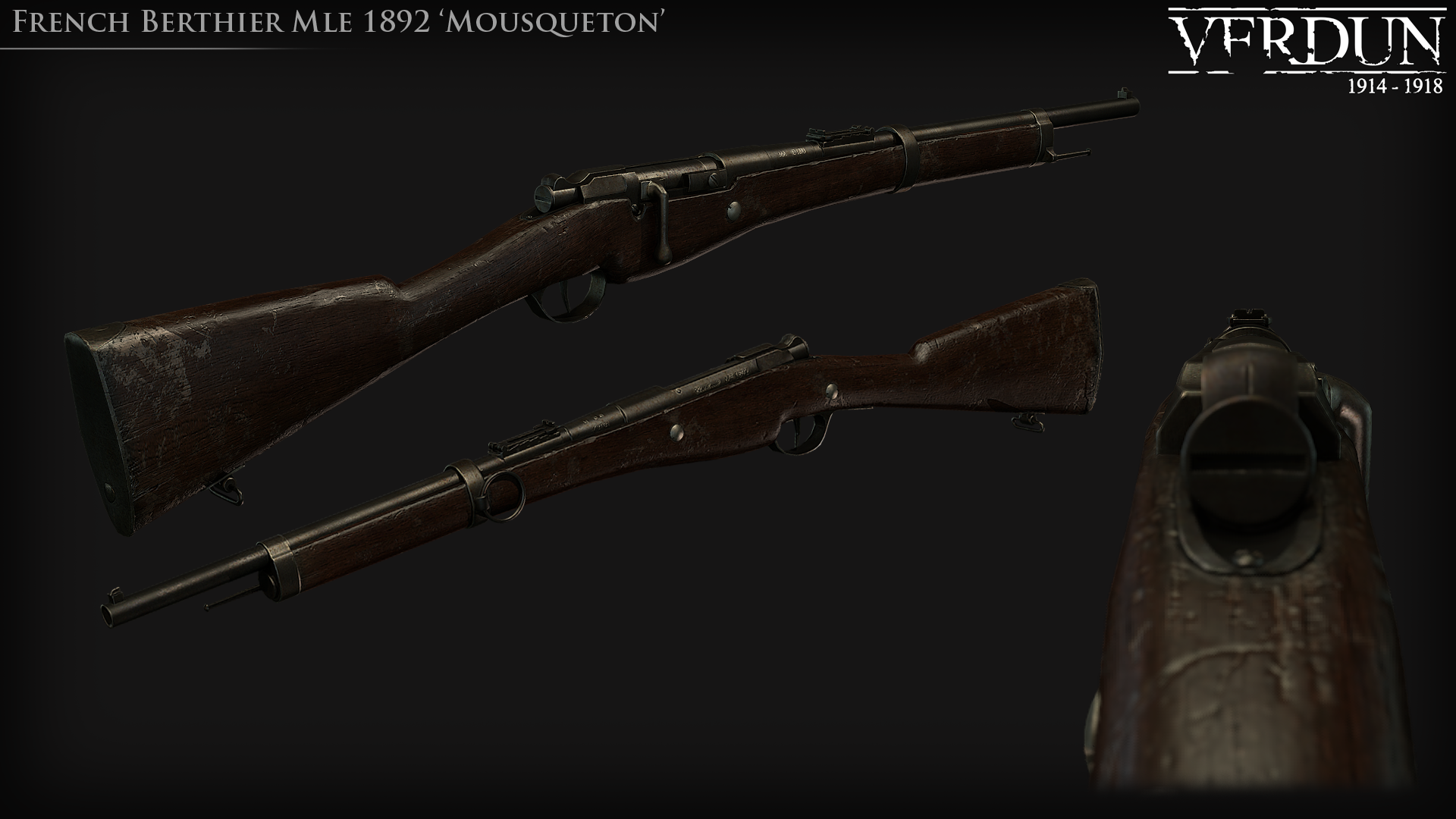 Work is progressing with the long-awaited performance build as we continue to convert the project over to the 5.2 version of the Unity 5. There has been a slight delay in this process as we had a few hiccups with the terrain shader. In solving this issue, we should be able to achieve a much nicer visuals with less impact on performance. The new shader will support self-shading on detailed objects in the terrain such as the rocks in picardie. A little teaser:

Work will continue on the update in the next few days, and soon we should be trialing the new update on the beta branch.

As mentioned last week, work has also been carried out in the overhaul the first person weapon animations and overall experience. In the previous ‘Weapon Wednesday’ we teased the new scopes, this week we go a step further and continue to improve the in-game sniper system. The first major change will be in rendering the lenses and crosshairs. Now fully utilising Physically Based Rendering techniques (popular in current generation game engines) we are able to much better result in rendering glass. In addition to this we have tried to subtly improve our take on looking through a telescopic sight. A quick tease of this can be seen here, note this is still a work in progress:

In addition to the new aiming system, we have also updated the sniper mechanic to support iron sighting as well.. This has been a long-requested feature from the community and should provide a little relief from the new - more difficult to use aiming system.

Today, with tremendous pride, we can also show the first shots of the upcoming Verdun based map: Fort Douaumont. We have been working on this for some time now. A very large amount of research, including field trips, has gone into the production of this Fort. All elements were modeled closely reconstructing the fort as it was during the French attempts to retake the fort during the bloodbath that was Verdun. Over at Polygon they have been keen in following the production of our challenging WW1 environments which have made for an interesting read, check out the article Polygon.com. 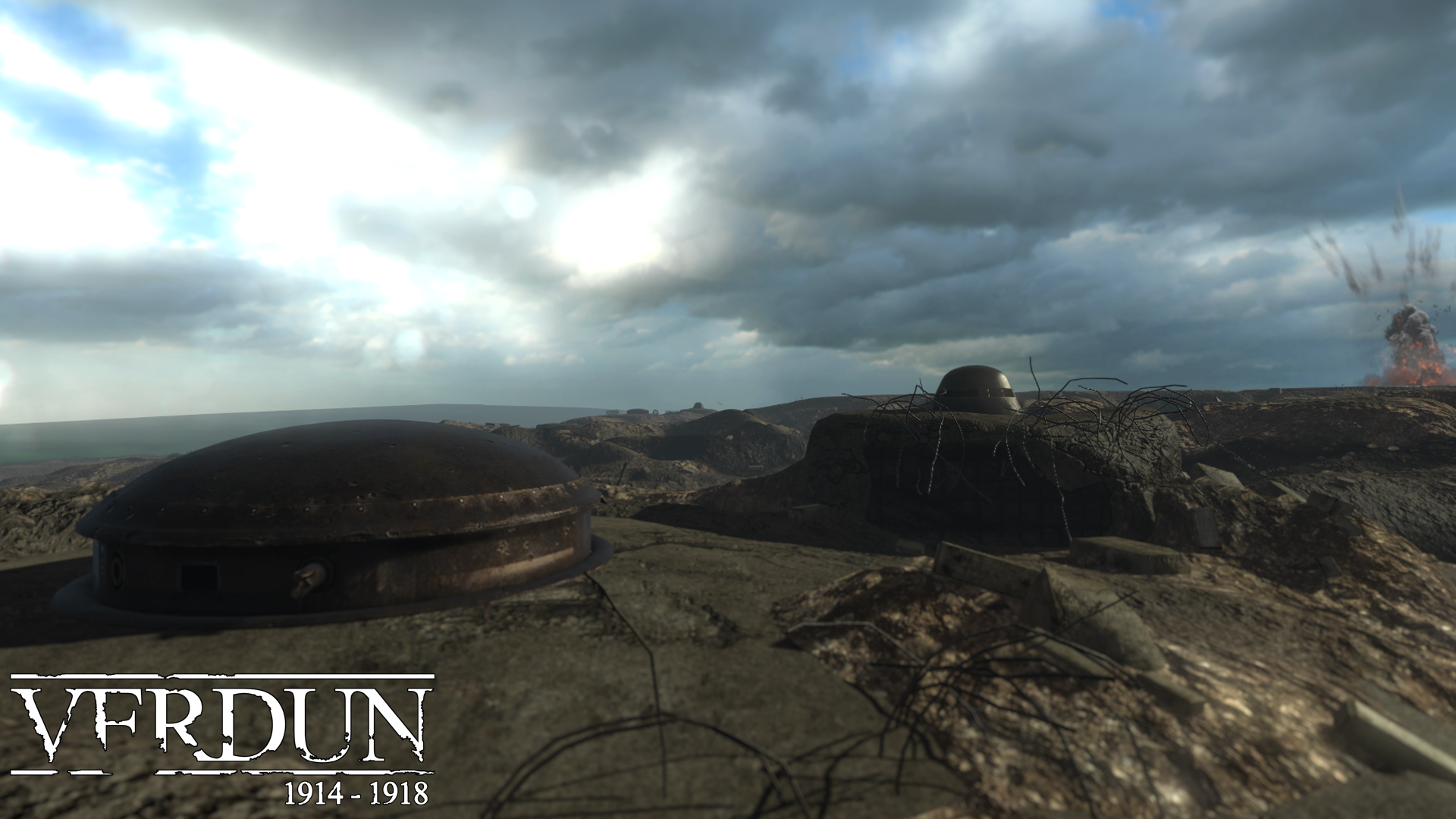 The iconic observation and 75mm turret on top of the fort. Note the desolate environment

Again, stay tuned for next week’s update and thanks for tuning in! We hope to next week be introducing you to some not so friendly firearms!

I have always been really impressed with this game. I remember when it first game to steam. It kinda a mess. But it has really improved in every aspect. I will have to give it another download sometime.