The game's functionality is getting a fresh make-over. Even the main story has been completely changed! See what's new in the world of VIRGA!

Due to time restrictions, I decided to take a new approach towards completing VIRGA for the Android. Although the story and game aesthetics have changed, the artwork and functionality still holds true to the original concept. Here's the change-log for those who are interested: 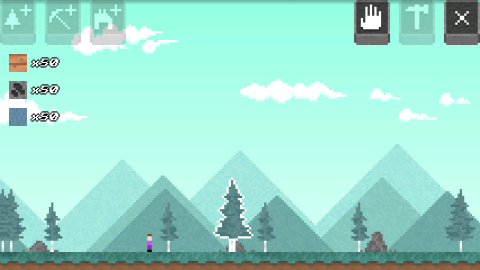 There were many more fixes and introductions to new features, but these were definitely the most important to mention. I'd like to visually show you the new features:

As you can see, the GUI looks much nicer. Buttons are easier to learn and give players the feeling of control. In addition, buttons will hide themselves when an option is not available or when resources are out.

This next image demonstrates the new commanding system for your survivor. Simply touch the screen to give him an order, and a white arrow will indicate your action: 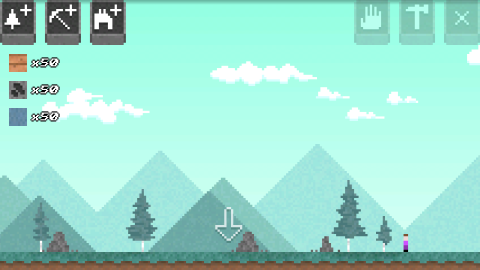 This will inform players that your survivor is ready to help build anything you desire.

I added 2 new buildings; each with 1 upgrade option. Take a look at the new Mine and Factory facilities you can create:

Mine Shaft: Build these so that you can farm more rocks faster. These will increase your productivity greatly.

Metal Factory: Convert your hard-earned rocks and smith them into metal. Use your new metal to upgrade your current buildings. Upgraded buildings produce resources much faster!

Things are starting to come together. I hope to have this game ready for users to play for FREE by the end of September. Be on the look out for new updates!

Thanks for reading and I hope you have a great day!

Well this is new.

This looks really nice, can't wait to try it out. Good luck!

LOOKS NICE CANT WAIT FOR IT!

Looks good. I think the buttons would look better if you slid them up so only the depth face at the bottom was visible instead of making them go transparent like that.

@Doppler: Even though the concept has changed, I must say that it might actually be for the better :D

If I hear you right, you'd like to see only the bottom portion of the button when it is not in use? If so, I should test it out