We have some very exciting news: Last Wednesday we won two awards at the Dutch Game Awards! We received both the “Economic Achievement Award” for best selling game as well as the prestigious “Industry Award” which was voted for by our fellow Dutch game industry professionals

Awards
First of all, we have some very exciting news: Last wednesday we won two awards at the Dutch Game Awards! We received both the “Economic Achievement Award” for best selling game as well as the prestigious “Industry Award” which was voted for by our fellow Dutch game industry professionals. Winning these awards has given us a great boost in morale and we’ve been putting in more effort and energy to the further development. It’s also a great feeling of recognition for the hard labor and effort put in over the last few years. 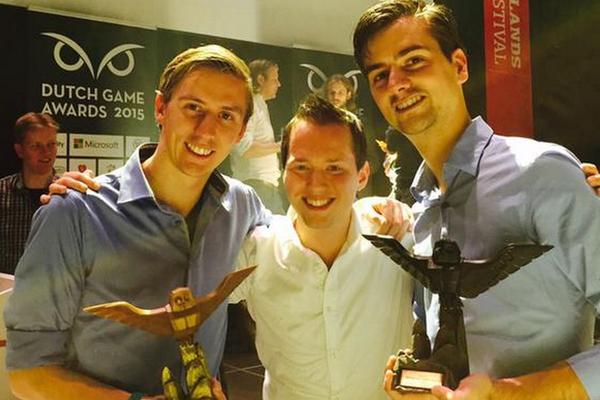 Lee-Metford Mk II
The Lee Metford was father to the British SMLE, it was the first adopted iteration of Enfield bolt action rifles used with the British army; it earned a reputation for being a reliable and accurate rifle during the Second Boer War and in other empire related conflicts. The rifle would see action again in the early years of the Great War. The Metford rifle was often issued to BEF scout patrols and to highland regiments in the opening weeks of the war, and saw seldom use as a sniper's rifle beyond that. While the rifle was being phased out by the SMLE rifle come the start of the Great War, it saw it’s swan song during the battles of 1914 and early 1915. 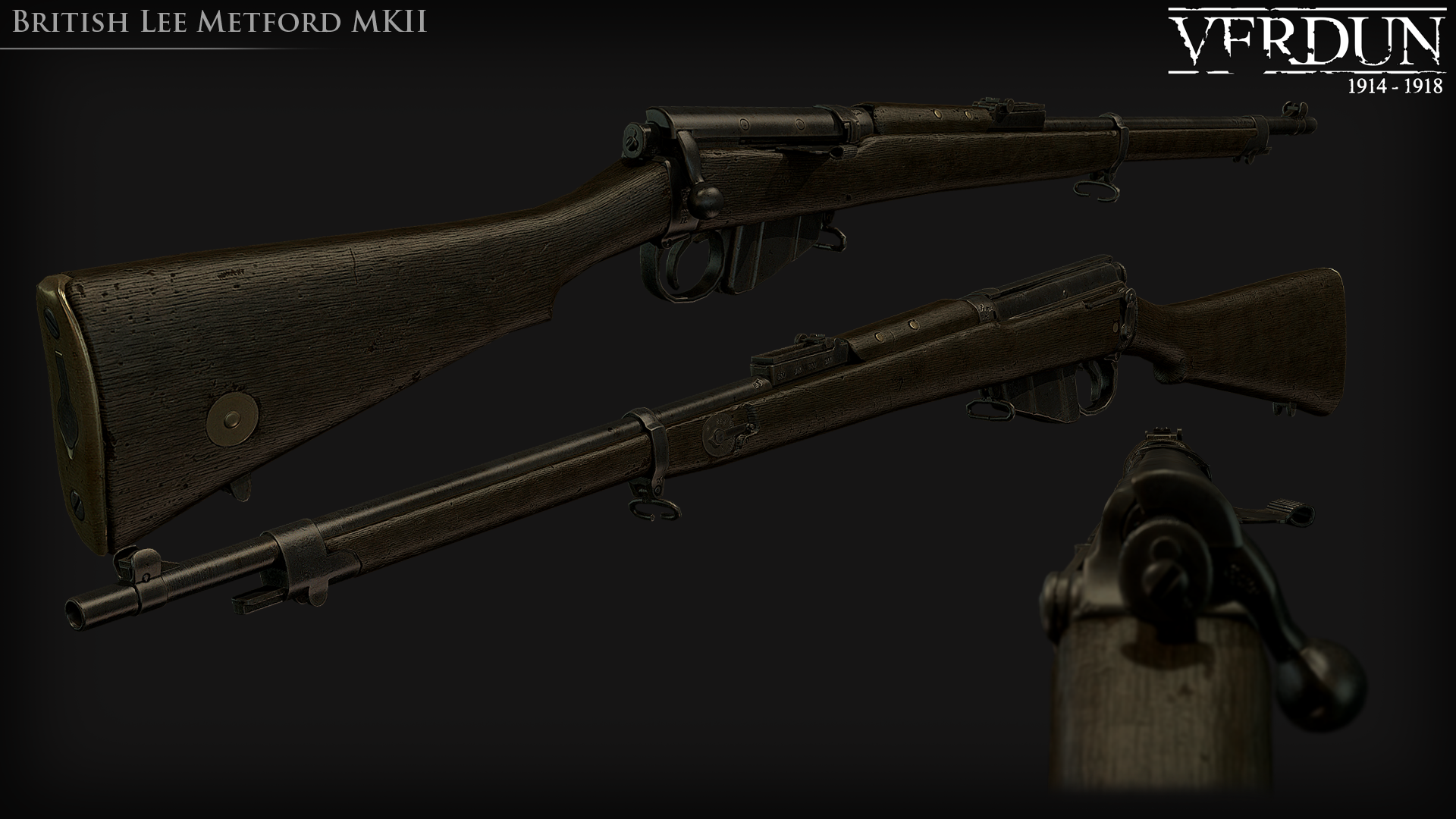 In game, this rifle will behave in a similar manner to the SMLE, however, the lack of the clip bridgeframe will make for a far slower reload. These rifles will be very uncommon on the frontlines, their reliability and speed they should provide an interesting comparison between old and new. Seeing use mainly in Historical Scenarios and Attrition/Rifle Deathmatch … this rifle was just far too iconic for us not to include, and who knows - may provide us with a solid base on which to add more exotic units in the future.

M1883 Reichsrevolver
Like most European powers in the latter part of the 1800’s, Germany looked to adopt a repeating handheld firearm for its military. The M1879 Reichsrevolver was solution, this standard issue sidearm was granted to officers and artillerymen from the late 1870’s until the early 1900’s. The original design was heavy and cumbersome, but had a large 10.6mm round (equivalent to a .44 S&W). In the early 1880’s Germany decided to make the revolver a little easier to handle. In reducing its weight - the M1883 came to be. A single action revolver, which was still ‘old tech’ for its time ... but did the Job until the C96 mauser and P08 luger came along. 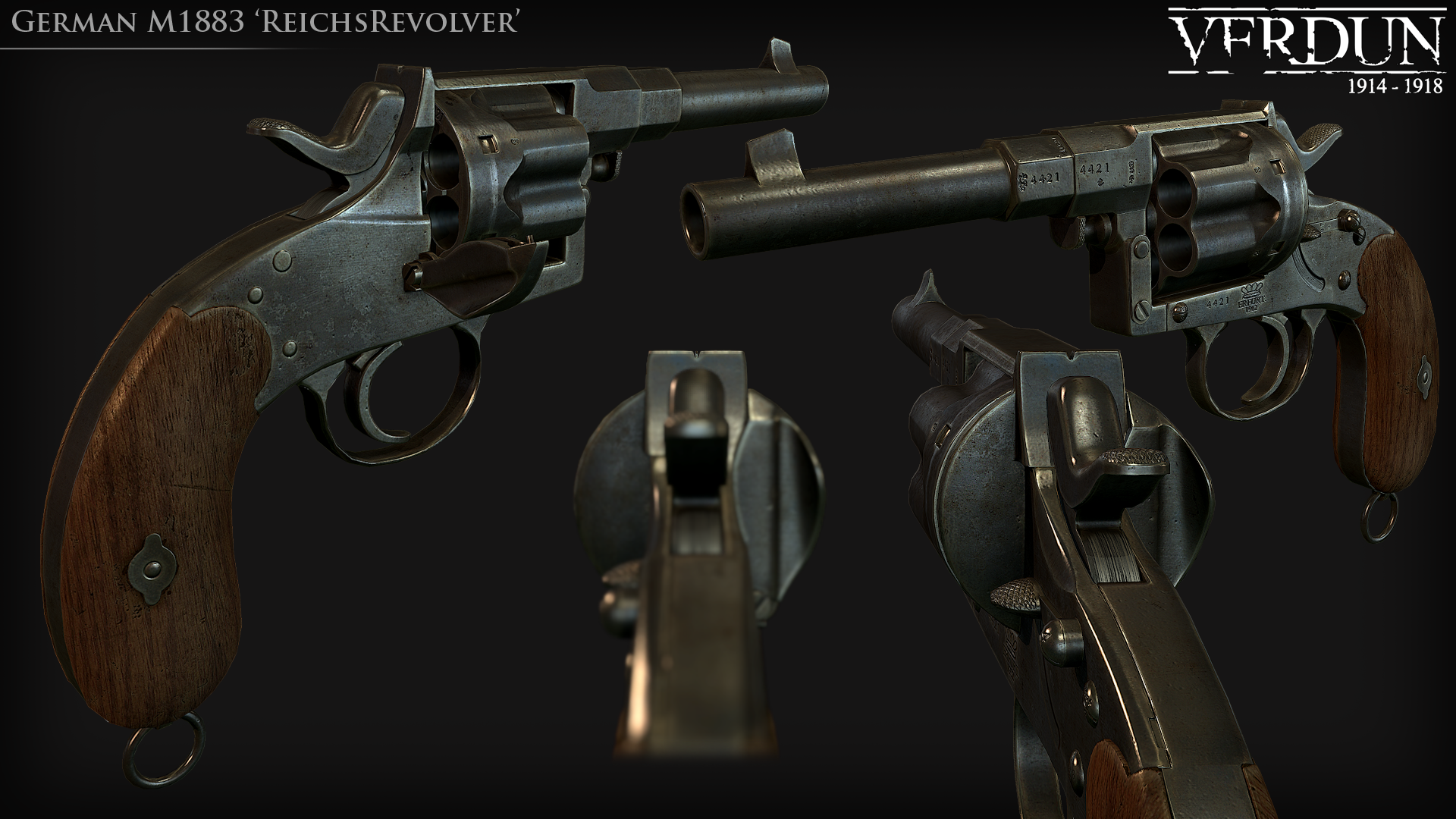 In game the Reichsrevolver M1883 will have excellent stopping power, however with a slow reload rate and limited numbers being issued, only the more seasoned trench fighters might truly make use of them as an effective combat weapon.

M1911
The Colt 1911 was adopted as the standard issue firearm by the U.S army in 1911. during the latter parts of the 1800’s and the early parts of the 1900’s the U.S were rapidly altering their military arsenal and come the early 1900’s were in need of a reliable self loading pistol. In steps John Browning, famous for his work with firearms throughout the period, with his design for the Colt 1911. Replacing a variety of different service revolvers and semi-automatic firearms, the 1911 offered the best of its predecessors in one package. The colt 1911 had good stopping power, it was accurate enough for the use it was intended for, reliable and well made - it made for a nice rounded package ideal for close quarters combat. Serving from 1911, it is still used with some military branches today and saw lots of use during WW2, Korea and Vietnam. 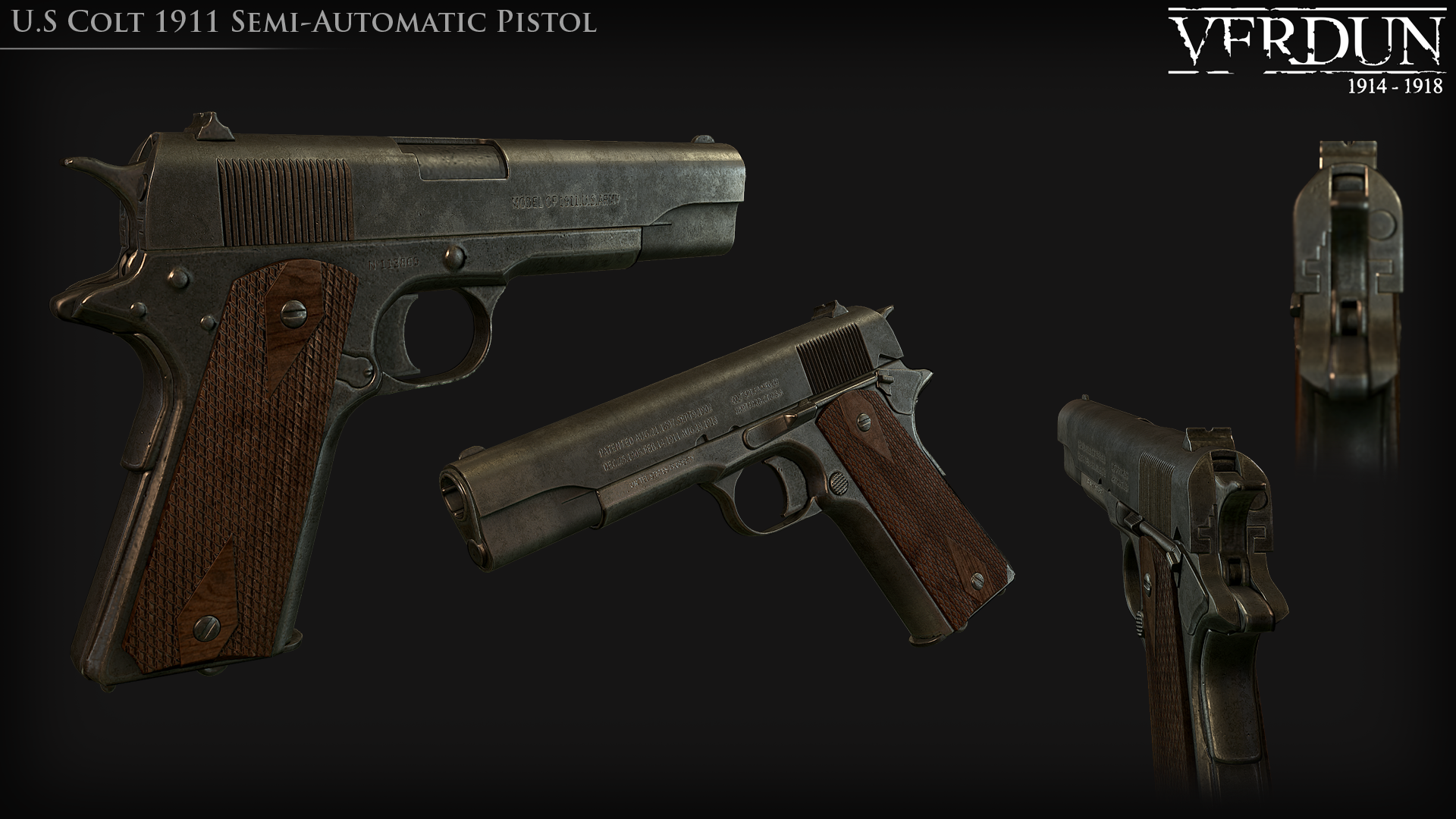 The 1911 in game will be hampered by it’s medium capacity magazine, the pistol will feel much so on-parr with the other pistols and - as always - will be deadly in the right hands.

Gewehr 1889 ‘Belgian Mauser’
The Mauser Gewehr 1889 was developed by the Mauser company for Belgium in the latter parts of the 1880s. Like many nations in Europe around the time, Belgium was looking to modernise its forces, and this modernisation required a bolt action rifle that would match any potential enemies arsenal. The Mauser 1889 was developed in it’s earliest form in the mid 1880’s and rejected by Germany during trials. The rifle had a ‘cock on close’ mechanism, similar to that of the British Enfield rifles from the period, which made for a faster bolting mechanism vs that of the cock on open design used with many firearms at that time. The rifle would see use in modified versions (much like the Gewehr 1898) in other conflicts of the 20th century. 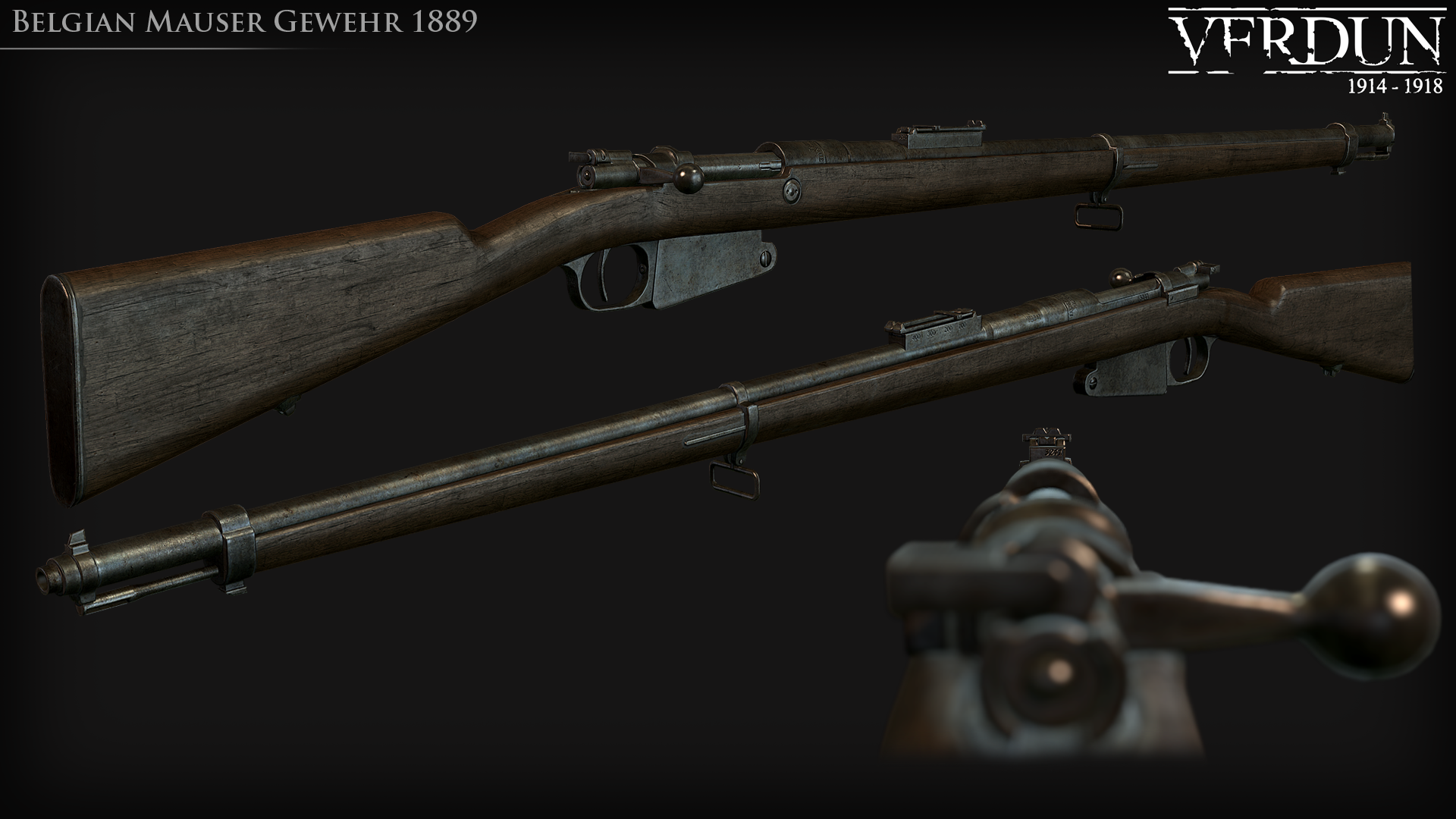 Boasting a reasonable rate of fire, good accuracy and good stopping power, the main drawback of this rifle will be the 5 round capacity, which will be noticeable with a faster rifle.

Mauser Gewehr 1889 Carbine
The Mauser 89 Karbine was effectively just the carbine version of the Mauser 1889. The model, like many carbines from the period, was design for use with units needing firepower - but not on a similar level to that which an infantryman might need. Reduced in length, weight and streamlined for use with cavalry units - the rifle offered a nice medium between a small arm (pistol) and a long arm (rifle). When the German army invaded Belgium in 1914, the small Belgian army didn’t always have enough G89’s to arm their forces with, so it was not uncommon for belgian troops to be issued with the K89 (much like France had issued the Mle92 to some of its forces) The Belgian forces being a defensive squad in game, use of slightly rarer weaponry would be quite common - and the K89 was common among engineers and artillerymen. 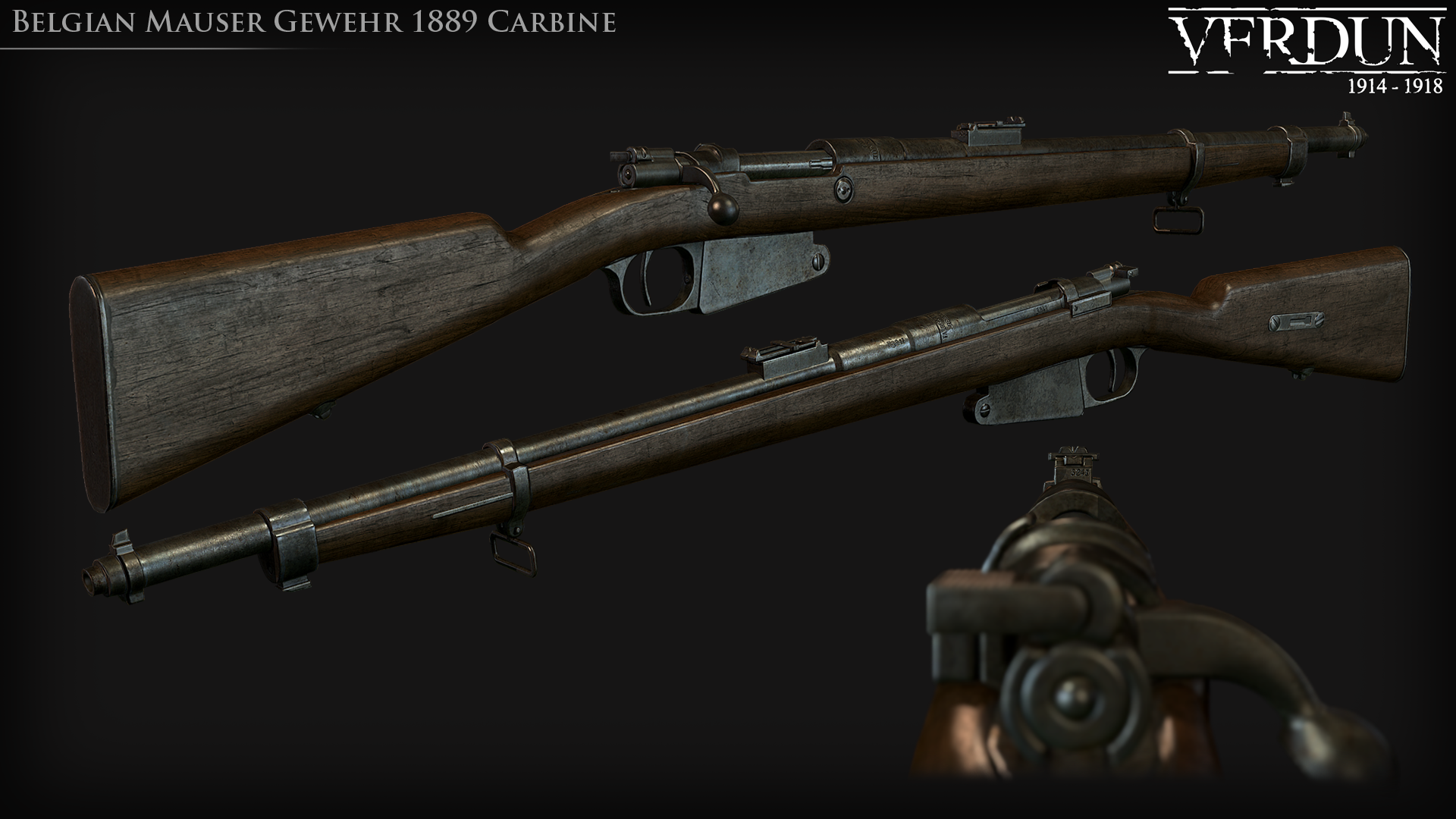 The rifle in game will boast excellent handling and a very good rate of fire, however, due it it’s very short barrel length - not quite as much accuracy as some of the other carbines.

Development status
Extremely busy times for the development team! As one mapping project draws to a close, work on another immediately begins! The first small playtests have been extremely promising! Douaumont has entered the final post-production stage. Most of the workload of this week has been on areas like the new LOD system and its impact on unity limitations. We had to go to quite some lengths in order for this to work, but the results are good. Latest tests show an increase of 20 FPS on Artois with ultra settings. Public testing will begin soon! Alongside the wrapping up of Douaumont and general optimisation, the gore system is taking shape, but you will have to wait a little while longer to see this.

Game update status
The next update is currently being prepared and will be ready for deployment in the beta section at some point within the next few days. We will invite people to come and test the new performance thoroughly, as well as a few little fixes here and there. The next update should also address the issues with the ban-system that some people have been experiencing problems with.
In addition to this beta, Douaumont beta testing will start early next week as we start to prepare for the launch of the Horrors of War free DLC.

Screenshots of the Week
Combined allied offensive near the Aisne: 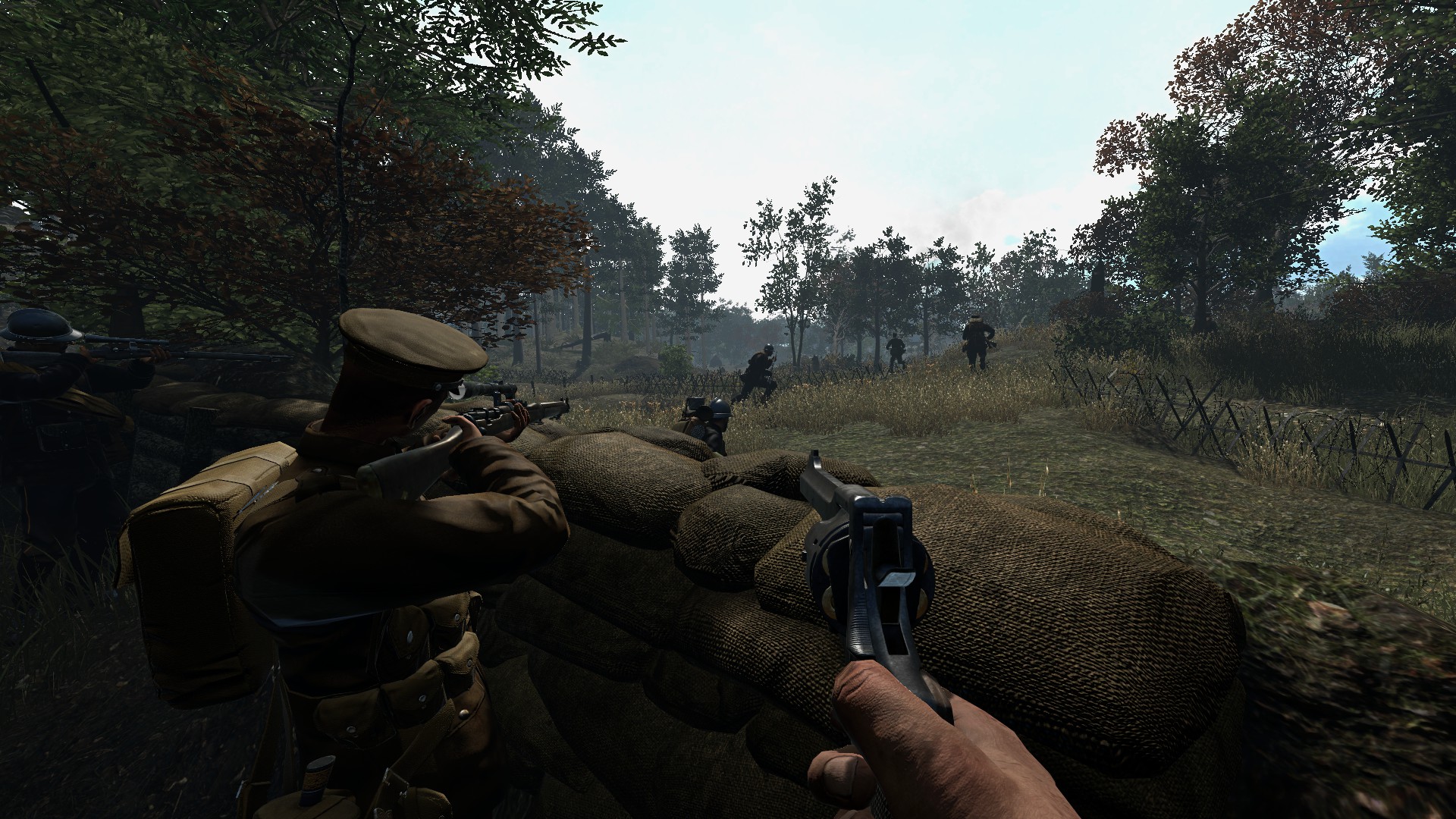 Canadian bombardment of the German lines, somewhere in the Ypres salient, Flanders: 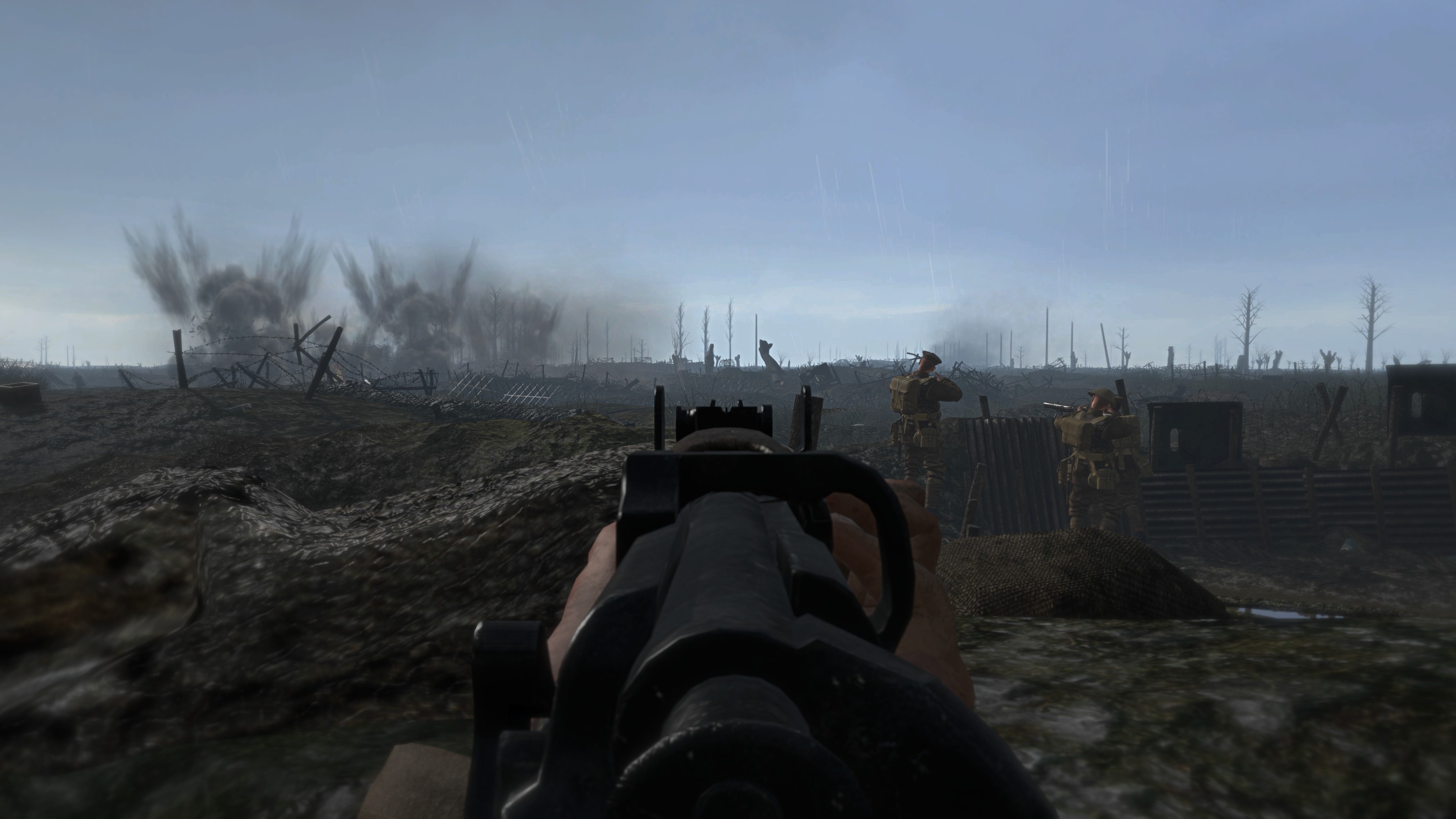 See you next week, where we’ll be continuing with this pattern of updates!

Congrats on the awards. Gefeliciteerd!

Great to see some "forgotten weapons", adds more taste to the game :)
How about the original German made Gewehr 1888 and its carbine? It was issued to real line troops and mountaineers and also issued in the Ottoman military in WW1 .

we have a decent stockpile ;)

That gets me excited :D

Congratulations on the awards earned, the team certain deserved it!