After 5 months of developing the User Interface on this project i thought it would be right to get a little bit more serious.

Before i say anything i want to mention that i have a problem with my keyboard so for any mistakes blame that. XD

Hello fellow S.A.O fans. As promised here's the update i metioned. Had some bugs to fix thats why it got delayed.

So in this update we have the folowing topics :

1 Loot and other Pop-Ups

With the major part of the main menu completed i moved onto the Pop-Ups Menus.

The version 2 of the confirmation of the option create a party ( social>>party>>create )
Version 1 : Version 2 : 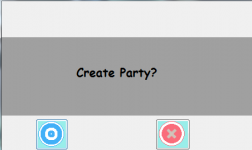 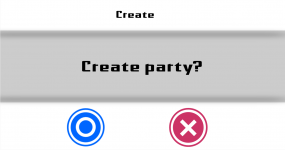 and the log out comfirmation pop-up ( options>>log_out ) is completed.
Also the version 1 of the Loot Pop-Up dialog is here.

This pop-up will open after you defeat the engaged group of mobs ( enemies ).

The contents of the window are :

The button has 2 status. First one is idle gray and the other one is hovered yellow.

Exp indicates the number of experience gained during the battle.
Exp minimum value is 1.

Col indicates the amount of col ( in game currency ) gained.
Col gained might be 0 at some times.

Items indicates the number of items looted from the mobs ( enemies ).
Items value might be 0 at some times.

As mentioned on previous posts THE UI IS NOT COMPLETE. I know that there are issues like coding, positioning, and graphic issues.

But i don't know what's wrong with you guys/girls doing like crazy and try to correct me. I want to be corrected but not on the way you're doing it. I always open to suggestions to make anything better but it seems that no one cares, UNTIL a demonstration picture is uploaded.

Sorry everyone i'm reffering to Quest as option on the user interface not as ingame option yet. :(

The Quest option has been removed from the Profile menu ( profile>>quest )
Before : ( sorry no crop on this one ) After : 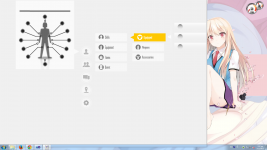 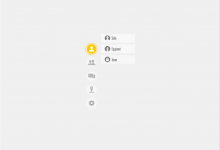 and repositioned into the Map menu ( map>>quest ) 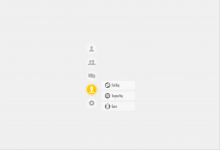 Whether the trasperant feature will be on or off is a subject to change.
All i have to say is: The next pics i'll upload include some Computer related brands, that i don't want to forward or anything.Just because of the colors they have are great for testing the trasparent feature.

I had some free time so added a trasperant feature on the pop-up menus.

The trasperant feature has been already applied here :

The following are a demonstration of the work i've done so far. 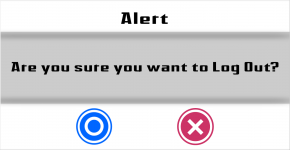 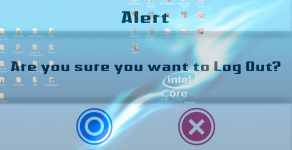 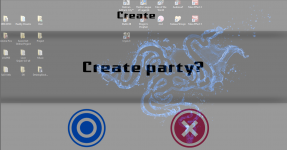 Everything that has something to do with computers contain bugs.
So does my UI.

From now on i will change the information included with my updates including this one.

Any further updates from me will include

Just a note for all of you.

Some of you got angry with my ecchi wallpapers so i changed them and cropped any of the pictures. Again i will say that i had no intentions of insulting anyone. I included them for 2 reasons :
1st because i thought they were cute.
2nd because that way no one could say "this is fake" or "it's just a fanart" or something like that.
Again i'm sorry for everything.

Your support makes me happy and gives me strength to carry on.
Closing i will thanks Gatreh for his info and Astreus for sending me his database.

Now, this is an UPDATE!

We need to go forward with this project no matter what!

Please do continue with this. Despite it obviously being impossible to play it VR I would love to play a game in the sword art world. Can I ask what language you will be coding the game in?

And the gameplay?
You meke beautful UIs,
but when the hard part will not be as good.
You need an team.
anyway, keep going.

Great work Azuna, Wish we could see an awesome job from the gameplay as well:) Keep going, ill root for yea xD

Didn't know where to ask this but will the nervegear actually be like the one in the anime? Like will you be put into a digital world?

Im hoping to have this question answered and im sure others are hoping too, so if this gets answered can you also put it in the FAQ for everyone else as well... Regarding the Nervegear, do you have developers working on this technology currently? Surely you all realize that in order to make such a product you need to be able to understand the brains functions; something not even scientists have figured out yet. How and will it be as immersive as in SAO?

Thank you so much, this is the best show I've ever watched. It will be an amazing game and I know you will make it amazing.