A lot of features a waiting for you, in this article i will present you the new features and descripe them, what i do now and what i do in the future.

Let's take a look, i'll create an outline of the changes what i've made.

Menu Differences on PC and Mobile

PC: Here is the Main Menu on PC, there are no much changes, but i've added a "Remember" checkmark to save your account details. 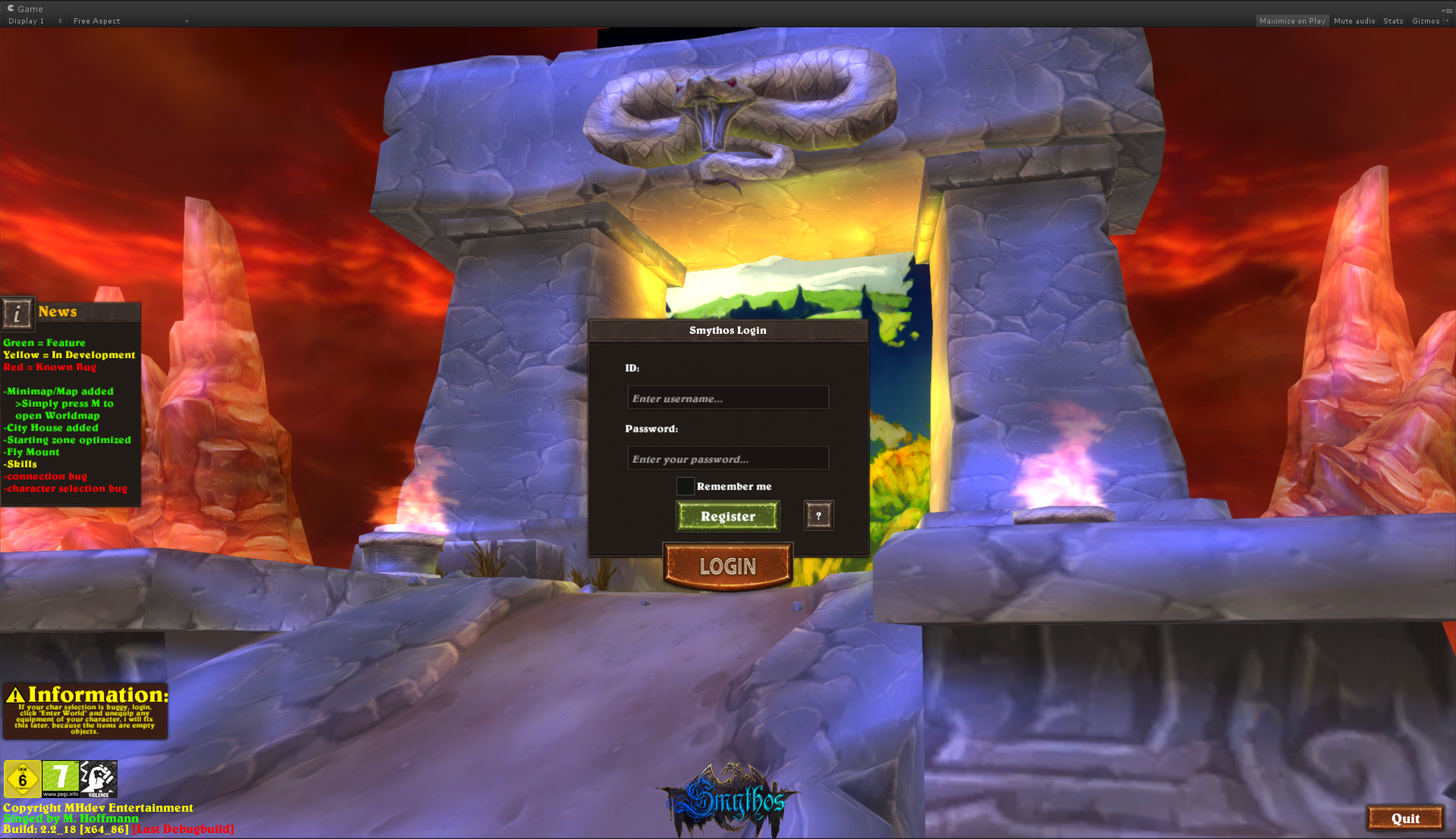 Mobile: And this is the Main Menu what it looks like on a phone. (using poor 800x480 resolution :D) I heard about what it would be... kindly nice to see more from the login screen when you open up Smythos on a mobile phone. :) 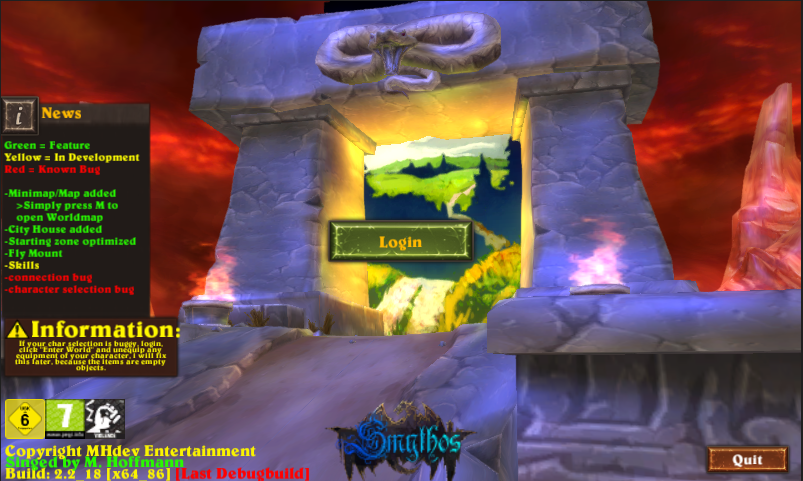 So lets go to UI improovements...

According to the feedback of friends and (and sadly only one customer, he's awesome!), they told me they dont know who gives you a quest and who not. I've added a Scroll icon over every NPC, at this point only for Storyquests, what take us the the next step, the Quests.

I'm coloring a Quest in 4 different types, it will be:

Blue: for Start and Eventquests

Here are some screens:

Here are the Quests: 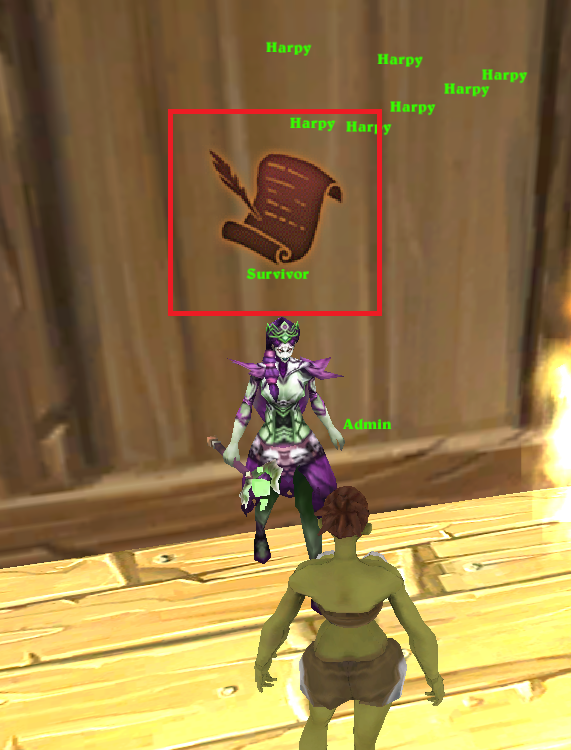 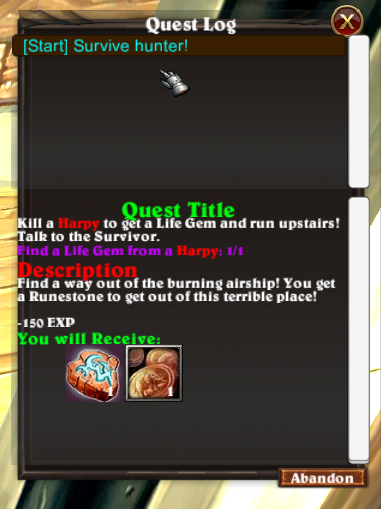 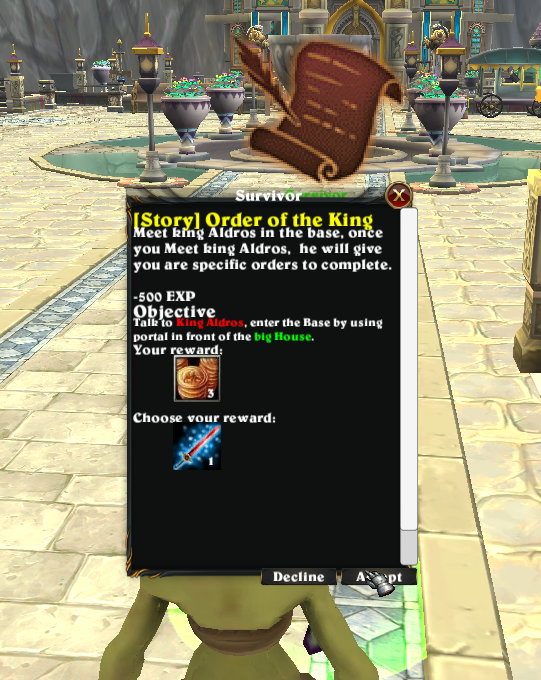 I've adding more Weapons soon, where you can choose of Items depending of your current class.

I have added a Minimap on PC version;

(i dont really think you need a minimap on mobile, I am glad if I can ever put a new button on a mobilescreen, there simply not enought space for that. :D)

When you press "M" key the minimap gets big into a Worldmap, you can zoom in and out with the buttons. (with + and - keyboard keys too!) Ive adding mob points and portal icons later. 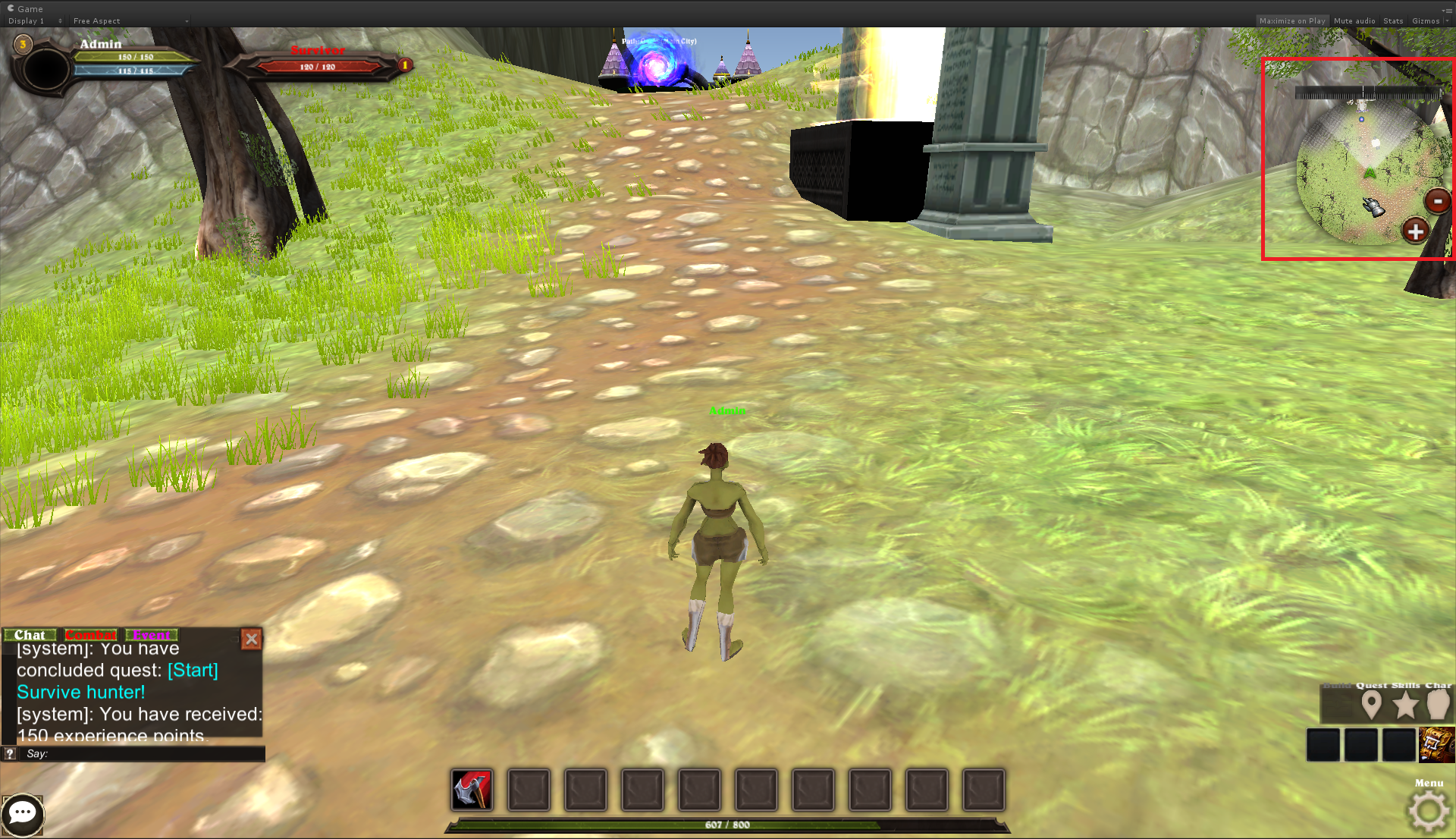 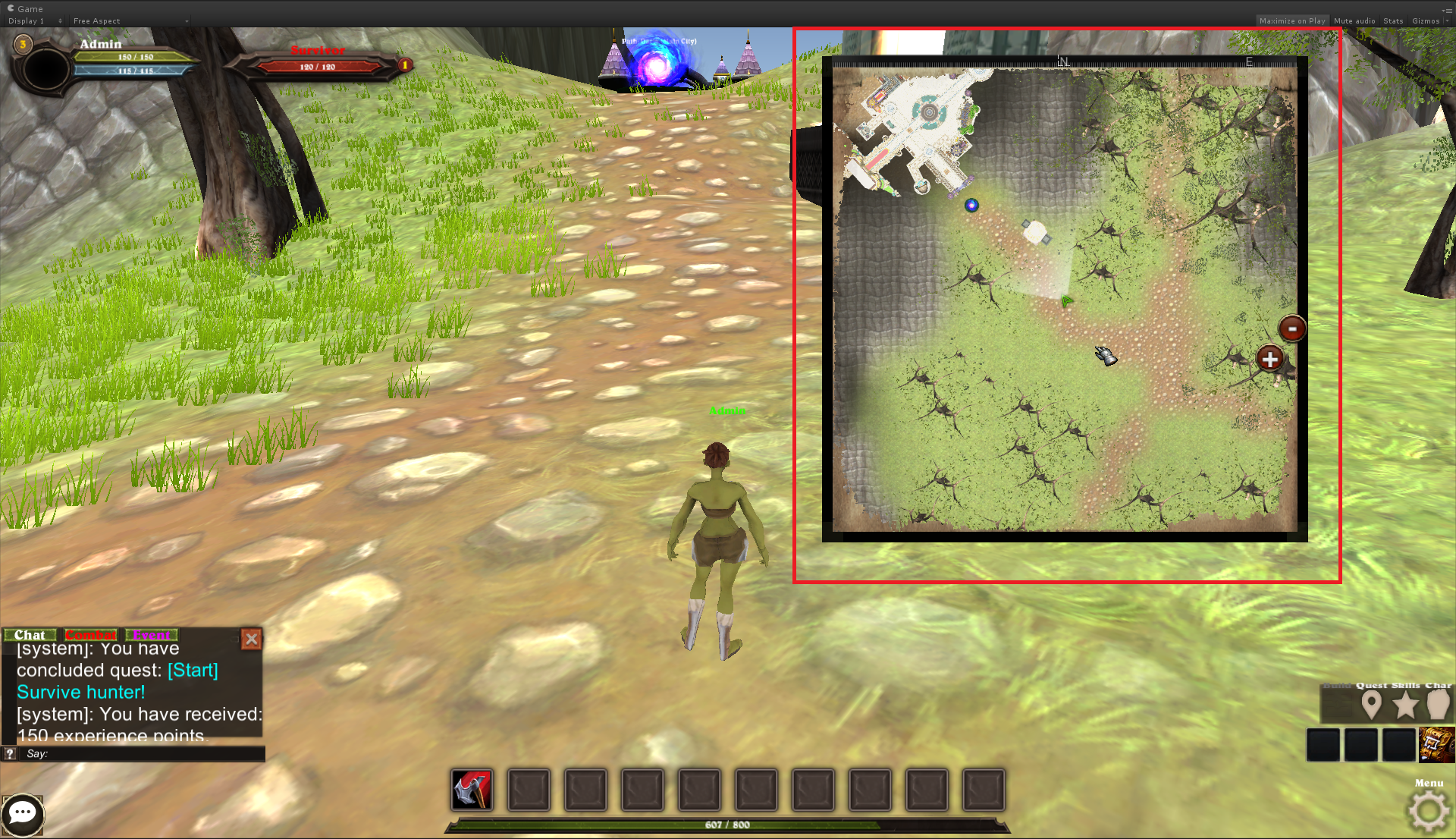 I've started to adding a house interrior for the city, in this you will be chatting or meet people, a bank and guild managing coming later in the future. (The interrior will remind you from another game.., i used it bcause i very liked that) 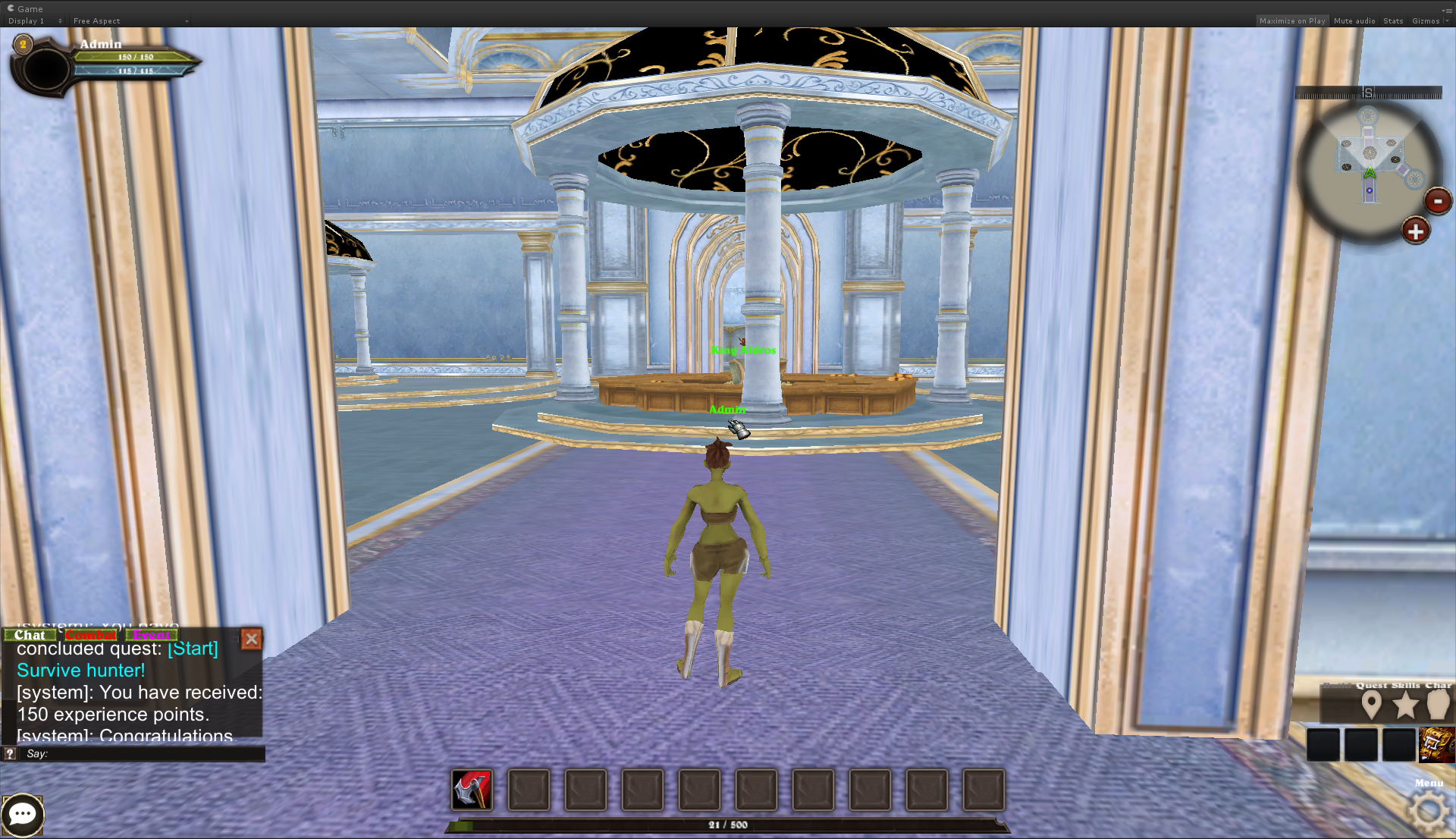 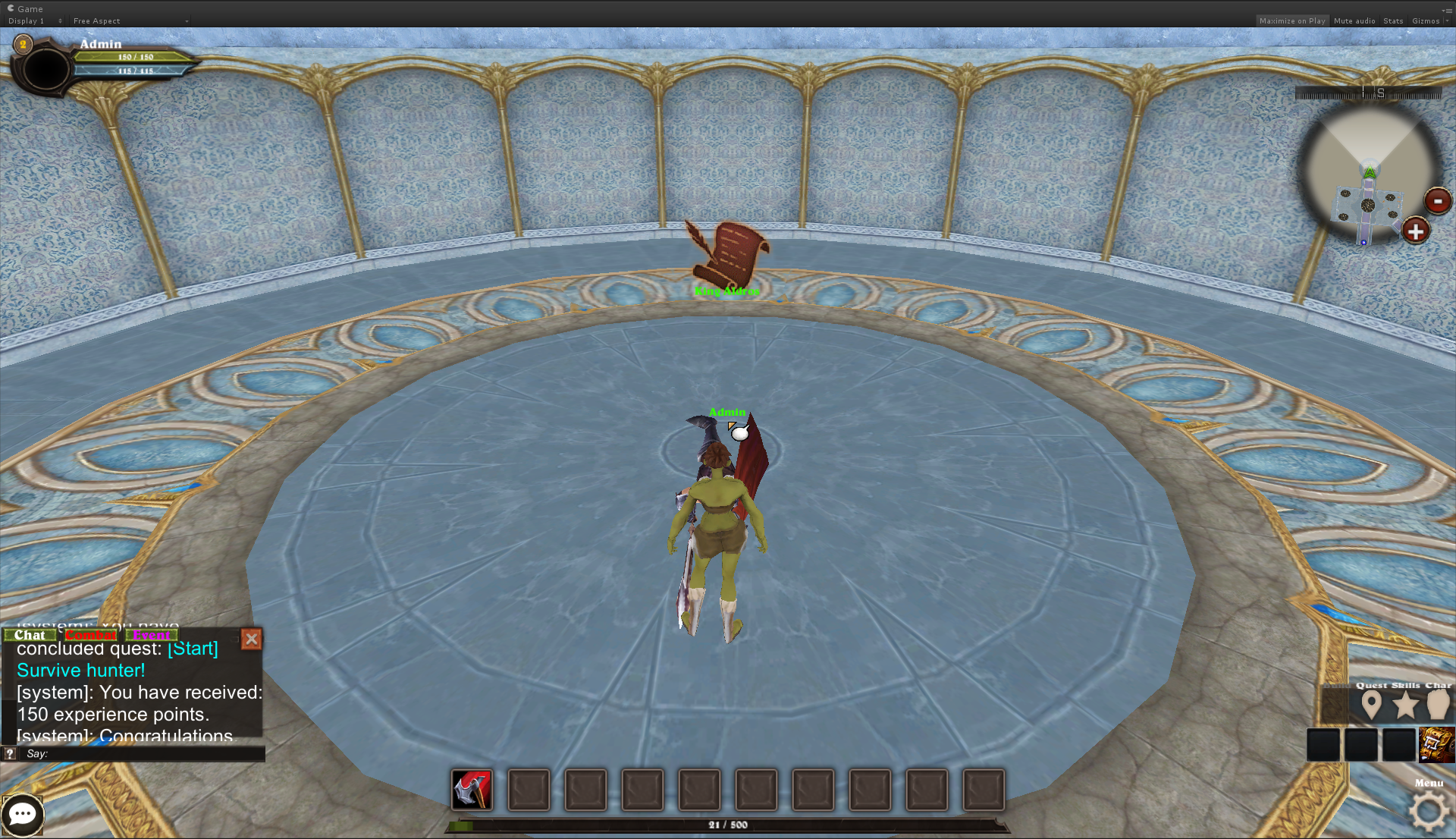 NPC is bugging a little, but he works! :D

My friends told me i should definitely add a fly mount, so i did:

Item: "Reins of the Flying Drake" {Item ID: 37}, he's currently not added on any npc merchant, should i reboot the alpha quest and add him as reward? tell me your thoughts. :) 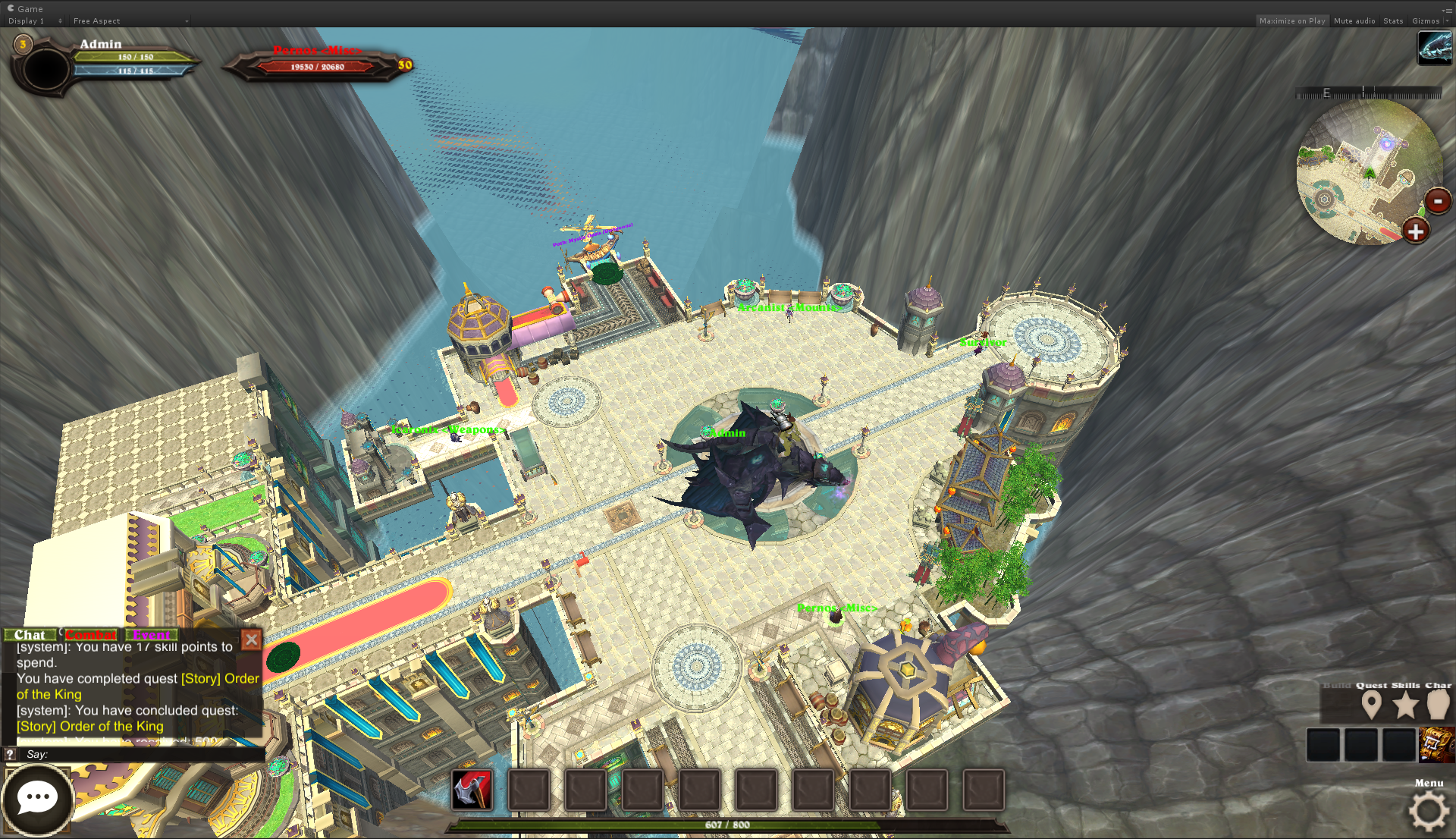 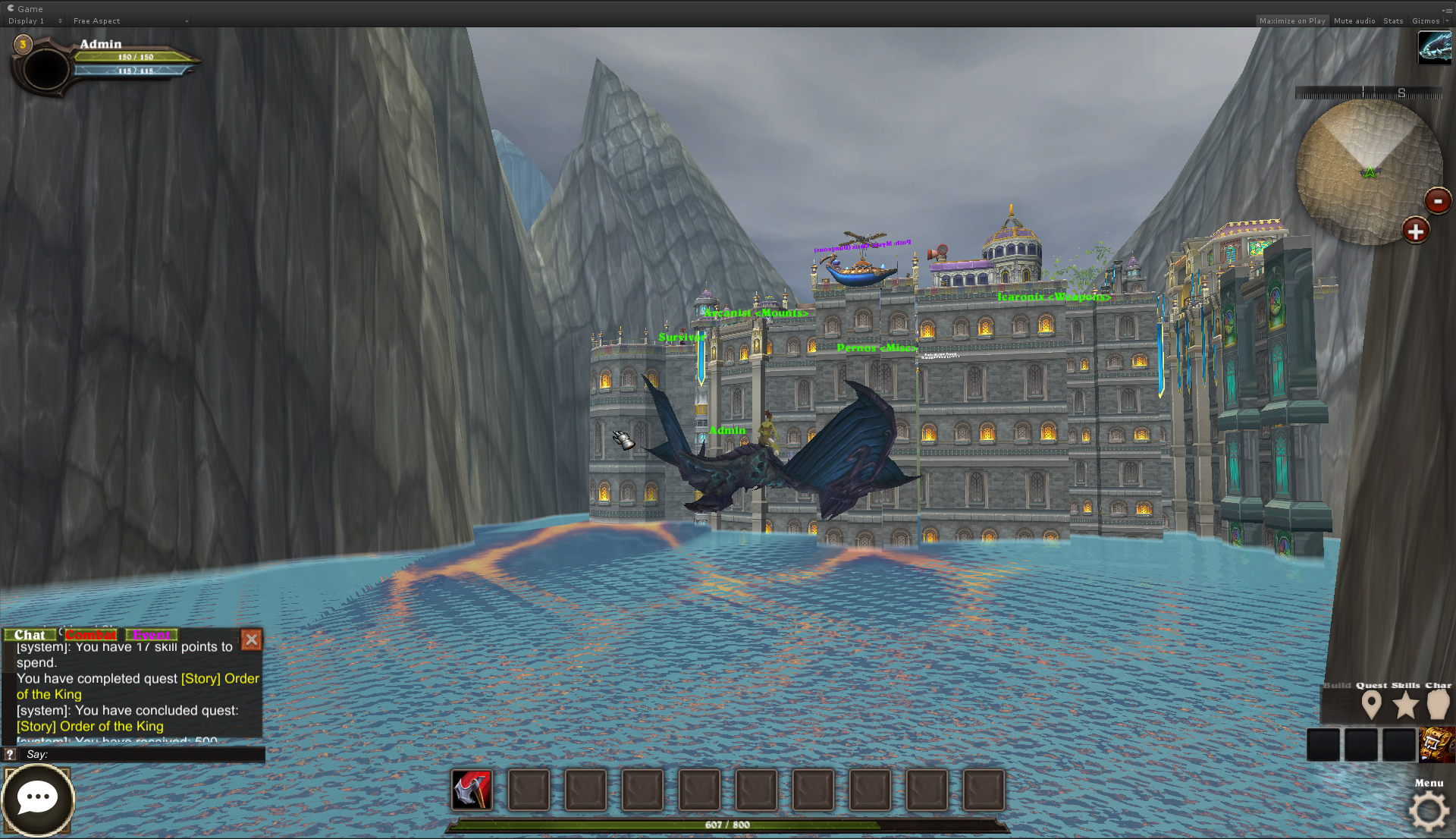 >Watershader is glitching with another texture, water will be replaced later.

>Later i will adding more collision walls, in order to not flight out of collision area, so you wont be able to explore the hole empty continent. :D

You can now exit the game without ALT+F4! Is that awesome! 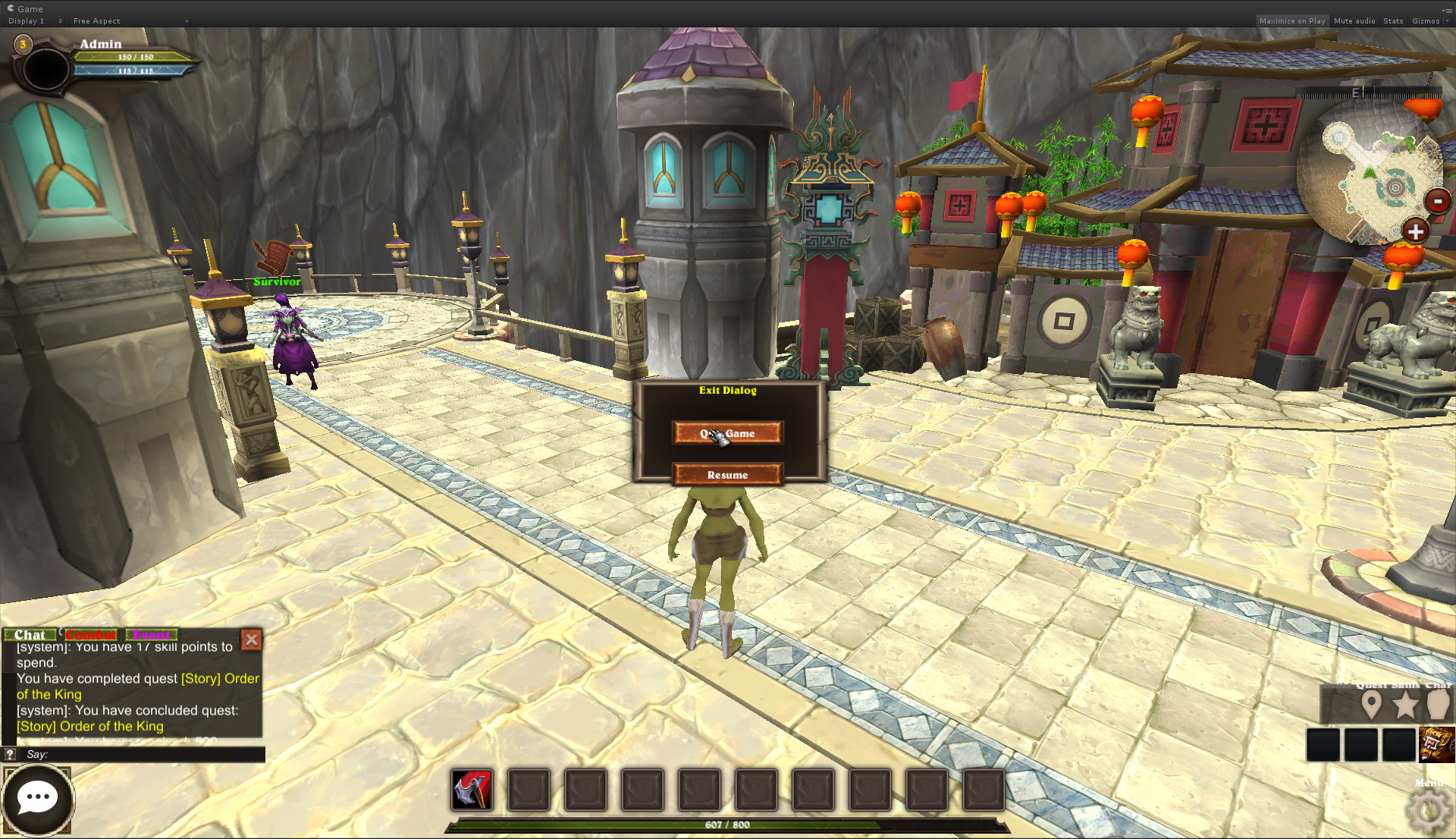 Later i will add more stuff like change audio/quality/resolution.

The bug was caused by an incorrect entry in the database. We need to update the client to take effect, you'll get it soon. 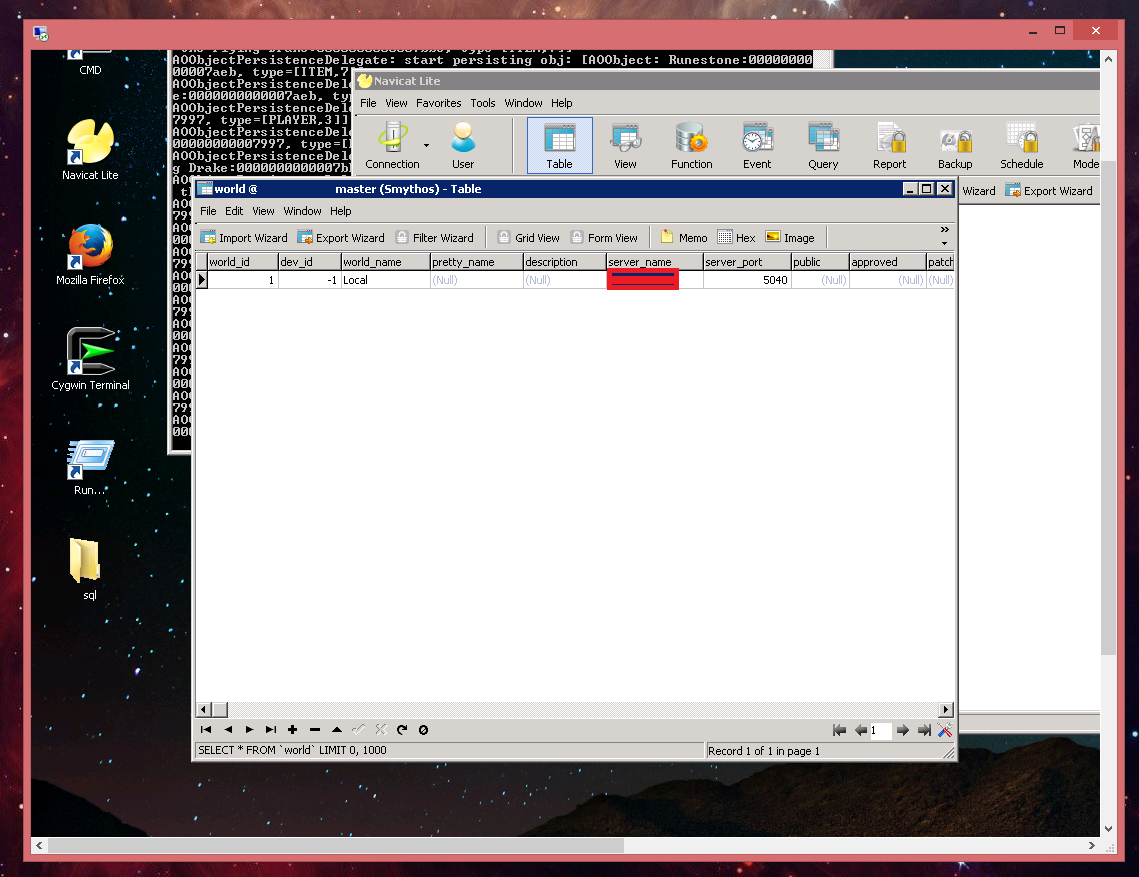 This bug is caused by a empty weapon (in other words, no object as a weapon), this affect every equipment like armor or weapons.

You can fix this, if you equip a weapon, it works flawless ingame, bug when you quit and login again, you get this sh**:

When everything is normal: 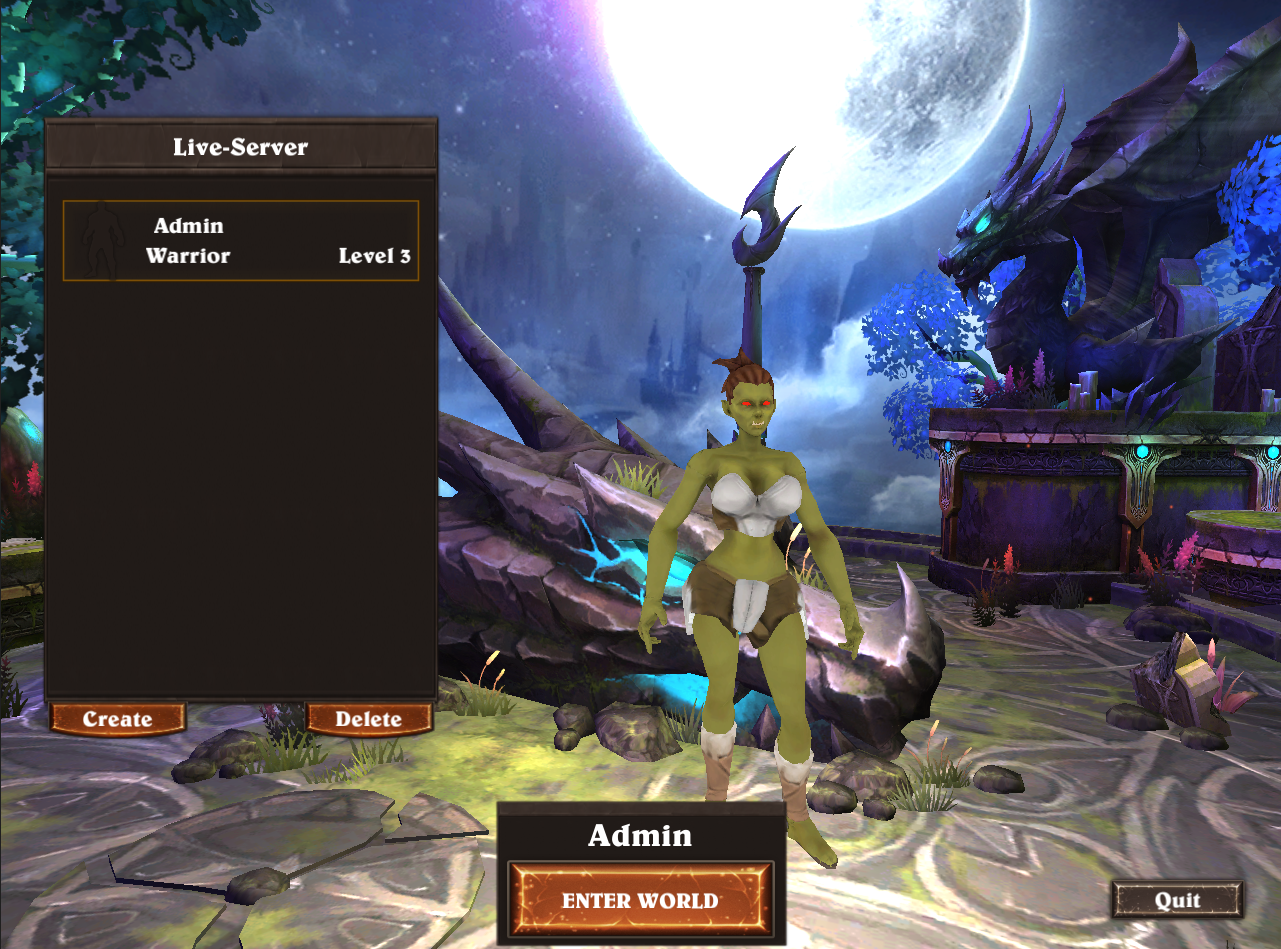 When you equip a weapon: 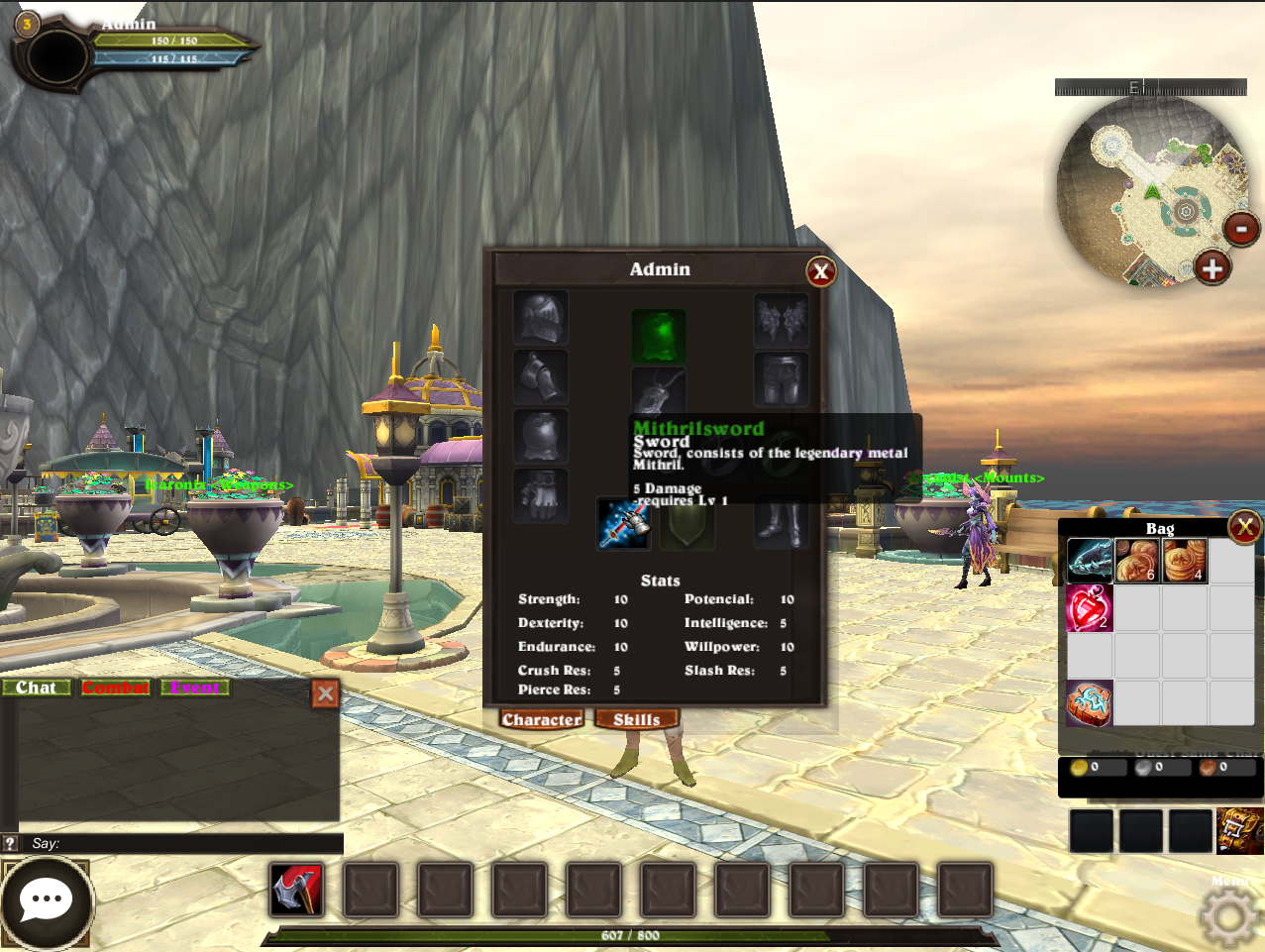 That happen when you let it equipped: 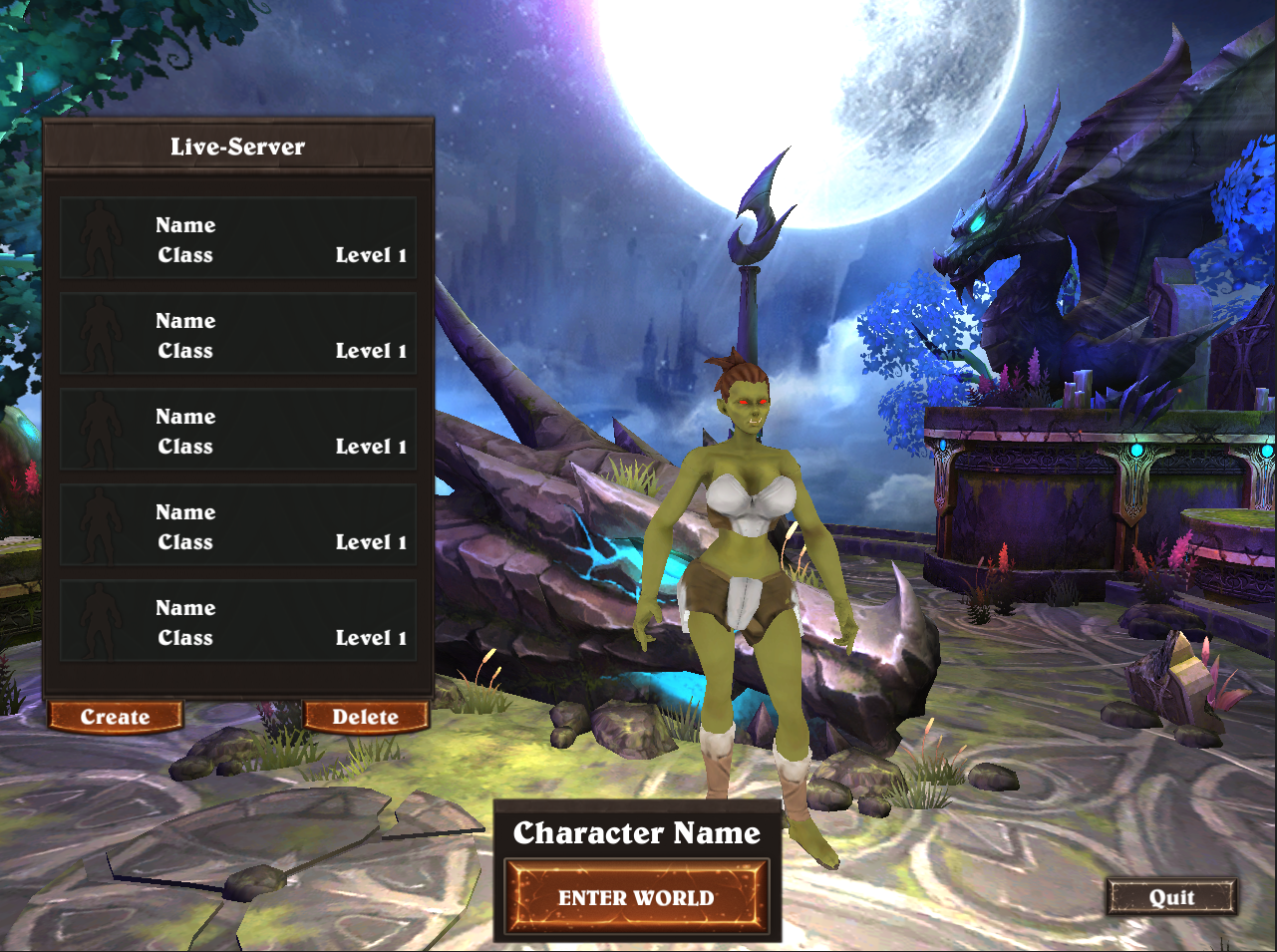 Simply click nothing and press "Enter World", and unequip it from your character.

For more Questions, ask me here or via. Facebook

This is the most literal WoW clone I have ever seen.

Yes, WoW is my inspiration. My goal is that to make it like classic, no copy, just recreate it. What i want is, to have the same difficulty as same as wow classic times.

Doesn't mean it will be a bad clone!