Besiege version 0.25 has been released bringing a number of improvements and some new features to the game.

Posted by spiderlingvon on Feb 5th, 2016

Today we’ve got the second half of our latest major update, Version 0.25.
Version 0.25 introduces; new features, improvements, bug fixes and a wide array of optimizations to the game. 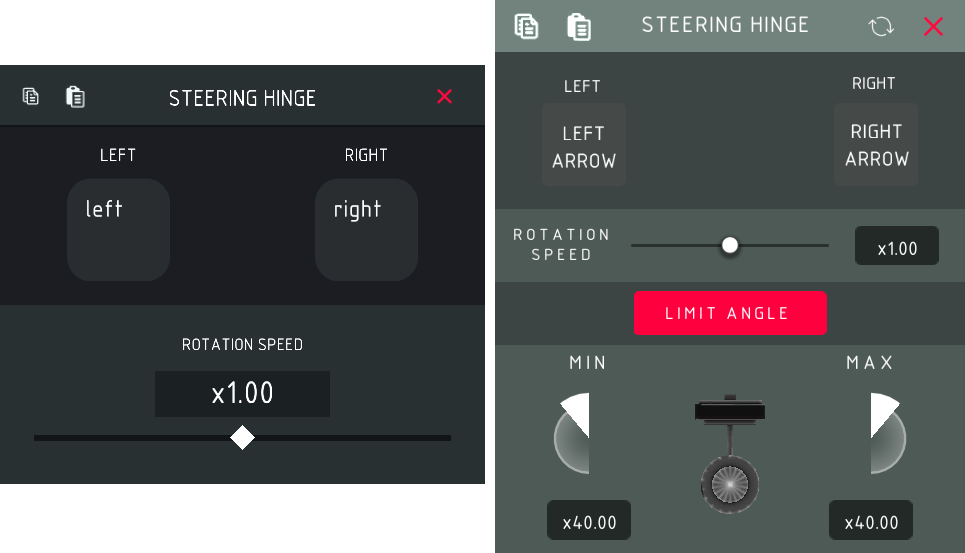 As shown above, Steering Hinges now allow you to set limits for their rotation, in order to prevent accidentally snapping your own wheels off.

Search Function
As the list of blocks in Besiege continues to grow we’ve added a much needed search function, allowing you to quickly and easily find the block you need.
The search function is clever, you don’t have to use the full names of blocks in order to find them, even just a single letter from each word will work (For example, w b for wooden block). You can also use descriptive terms such as metal to show all metal blocks.

Save System
Besiege’s save system as been completely reworked. War Machines are now saved in an XML format which allows for much easier and more powerful save editing as well as greater support for mods.
A number of minor issues with saving machines have also been addressed including being able to use special characters in the machine’s name and problems caused by foreign keyboards.

DON’T WORRY! .bsg machines can still be loaded in the game and the next time you save it will be converted to the new file type!

Other Useful Features
We’ve added some extra functionality to the undo system. We’ve added the ability to undo deleting a war machine as well as a second shortcut for re-doing actions.

Holding X or delete for more than half a second will now start deleting multiple blocks, no more bashing the keyboard to delete sections of your machine.

Unfortunately we have decided not to implement the camera block in this update because we’re not happy with the way it performs. Apologies for the delay but it will be coming in a future update.

Beginning this month I’ll be making a monthly community post which will feature the best community creations of the month, competitions/challenges, new mods and information about Besiege’s development.

We hope that you enjoy this update and we’re sorry for the delay, unfortunately we had a major setback before christmas and it’s taken us longer to recover from it than we previously expected.

Thank you all for your support since our entry to early access, you’ve made this a fantastic first year for Besiege and everyone here at Spiderling!

Improved Key Mapper window
Added reset option to the Key Mapper
Added toggle option to wheels and cogs
Drills and Spinning Blocks can now be controlled
Balloon string length can be be changed
Added power slider to Cannons
Cannon balls now inherit the velocity of the cannon used to fire them
Added power slider to Water Cannons
Water now inherits the velocity of the Water Cannon that produces it
Added Auto-brake option to Wheels
Added Auto-Grab toggle to Grabbers
Holding X or delete for more than half a second starts deleting blocks behind the cursor
Changed War Machine save format .xml
Special characters can now be used in machine names
Multiple hotkeys for the same function is now technically possible by editing or modding
Each block now has an individual GUID when saving
Blocks now store their scale in the save file (can be edited in save file)
Blocks now save an unlimited number of hotkeys, toggles and sliders
Blocks now save an unlimited amount of custom data
Improved access to AddPiece, BoundingBoxController and MachineObjectTracker.
You can now double click or CTRL + A in a slider’s text field to select all
Improved Timescale slider, making it easier to drag
Added clicking sound to copy, paste and close options in the block mapper
Undo now works for un-deleting machines
Improved how the translate tool moves war machines
Opening a block that can’t be customized in the Key Mapper tool now displays a message
Added CTRL + SHIFT + Z shortcut for redo
Added warning when attempting to start simulation with god powers activated

Recently got the game, and I have one small (pretty trivial) issue. Any time I adjust the time scale I cannot get it to go to 100. It will go to 99% or 101%. Just thinking that autolocking to 100 if you get close enough would be nice.