The winter weather overhaul is truly accomplished and playtesting on ice reveals the fun and deadly possibilities we've got now. Development focus has turned back into quests and we'll introduce an interesting mechanics of getting rewarded with village property.

Yes, the winter weather overhaul is accomplished and according to my playtesting the results are fun and great as expected. I had to spend some extra time to make animals respect the ice properly. Especially the big fat seals needed some big fat AI in their big fat seal heads so that they wouldn't try to go lay on the ice until it can hold their weight.

Playing on ice - with expense of elks and reindeers

Now let's take a look at few screenshots of a test character playing on ice - with expense of elks and reindeers. With overhauled ice mechanics you can expect exciting new incidents and scenarios to be discovered.

Here we go.. me and the elk.. onto the ice. Nothing new with animals going on ice, but we've got weather overhaul in action now. Aaaand this time the ice doesn't hold weight of the poor elk, so it falls through. As the ice didn't break that soon I reckon it's pretty safe for the character to follow. 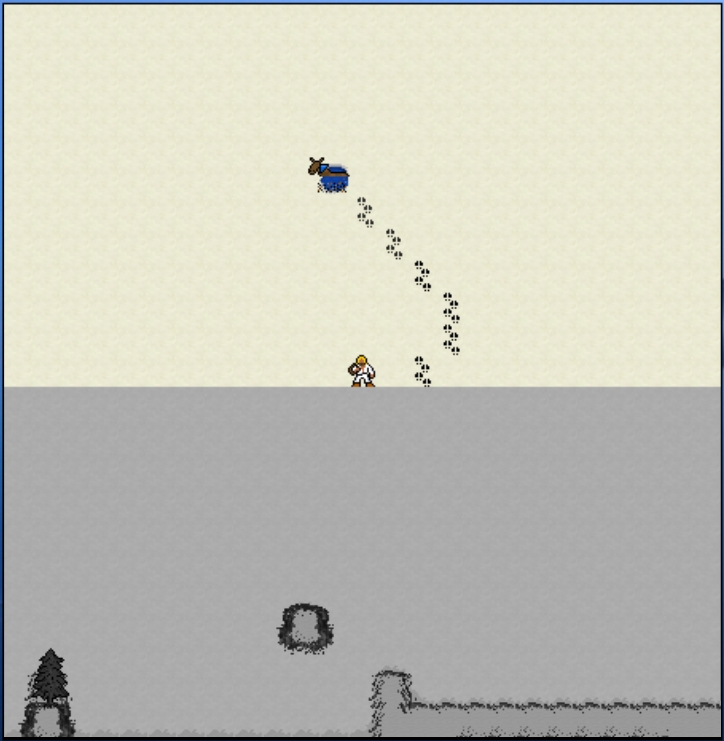 Large herbivores have close to zero possibility to get out of if they fall through the ice. However, this individual managed to climbed up a few times, only to immediately fall back into the freezing water as the ice kept breaking under its' load. It struggles, but finally freezes and drowns. Body temperature mechanics of NPCs are a lot more crude than those of the player character, but they are in there and drowning of NPCs/animals can now occur. 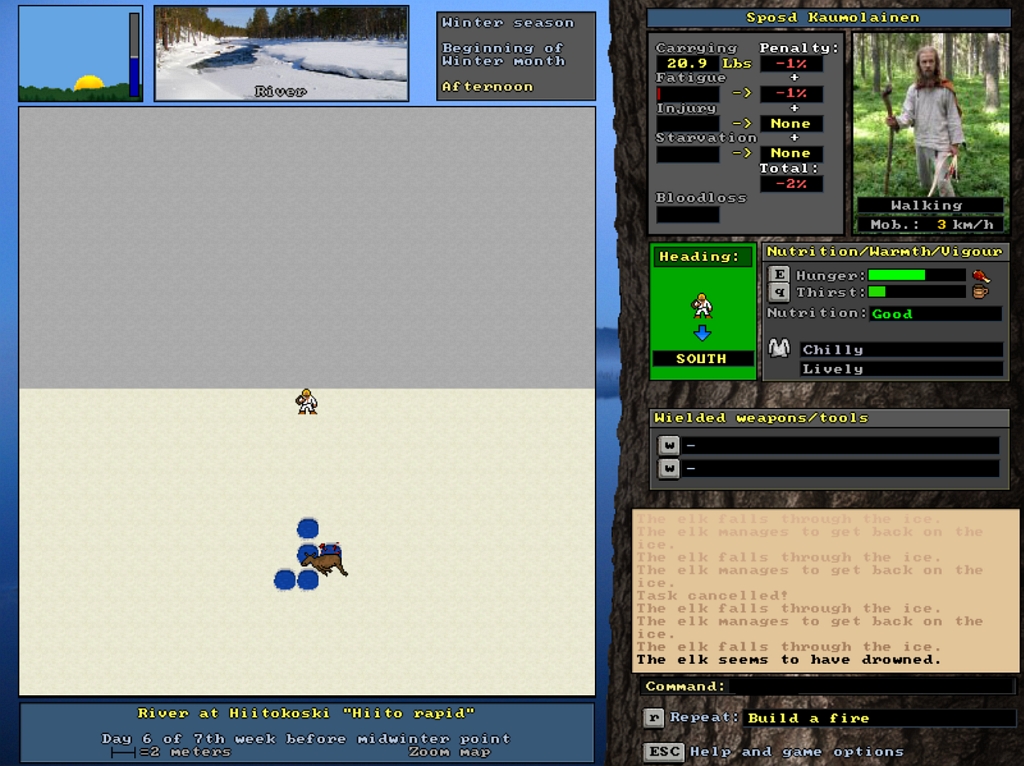 And here's an interesting scenery I happened to find. I had nothing to do it with, it's just something that happened in the game world. I don't know if it was wolf or a bear who scared these reindeers on thin ice, or was their leader just a bit too daring. All in all, they ended up in the icy grave. 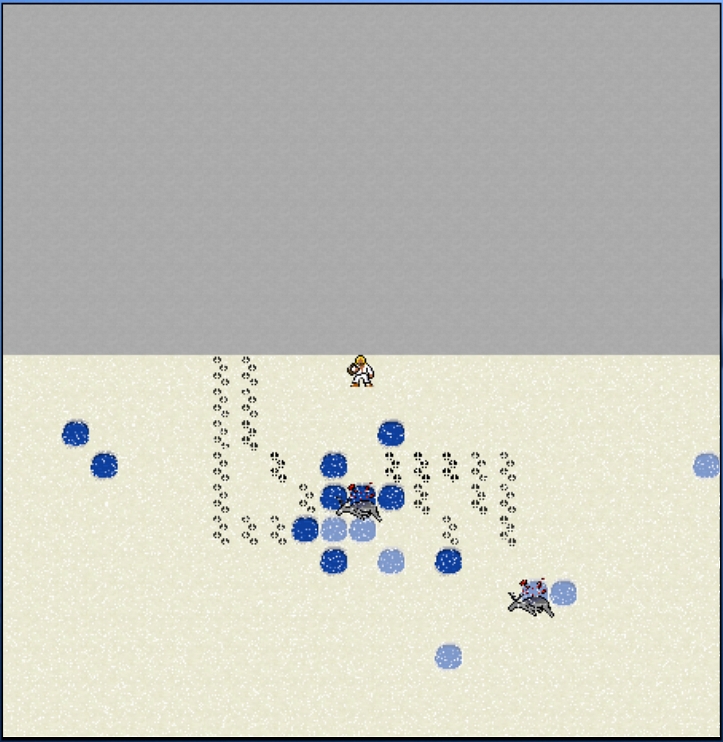 After the weather overhaul I've gotten fully back into quests, trying to maintain top priority concentration on them. Got a few quests that have been open and under construction for months now succesfully finalized and tested. It's still the quest related mechanics that require most attention and most work.

One of the most gamey quests we'll be having is simply to defeat a band of robbers. What's less gamey is that you can naturally do it in many ways. A victorious hero shall be rewarded with fair amount of village goods for free - and this amout can also vary depending on how things ended up.

Well, nothing too complex there, but what's worth of reporting is that we now have a mechanism where character can be given 'credits' to spend on acquiring goods and supplies for free. Trading code had to be bended and twisted quite a bit to shove this part in, but I'm very happy with the results.

Getting goods for free is a great reward as you can claim it whenever you like, all at once or in parts. It's also not in the least fixed reward as village inventories can be different, and change over time. And moreover, the system can be also used as a compensation for some simple chores, not the big quests alone.

When you get rewarded with free goods it still needs initiating trade after picking up your selections. NPCs will guide you through all this and also tell how it's going with claiming your reward.

Here the character uses about one third of the given reward to gets some basic goods: 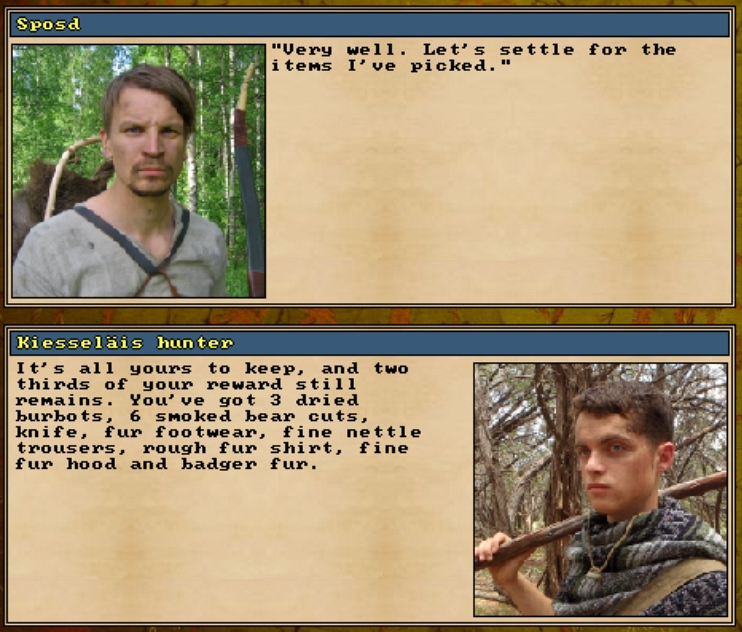 And here the expensive gear he wants exceeds the given reward. NPCs cut the prices accordingly, and let you know about it: 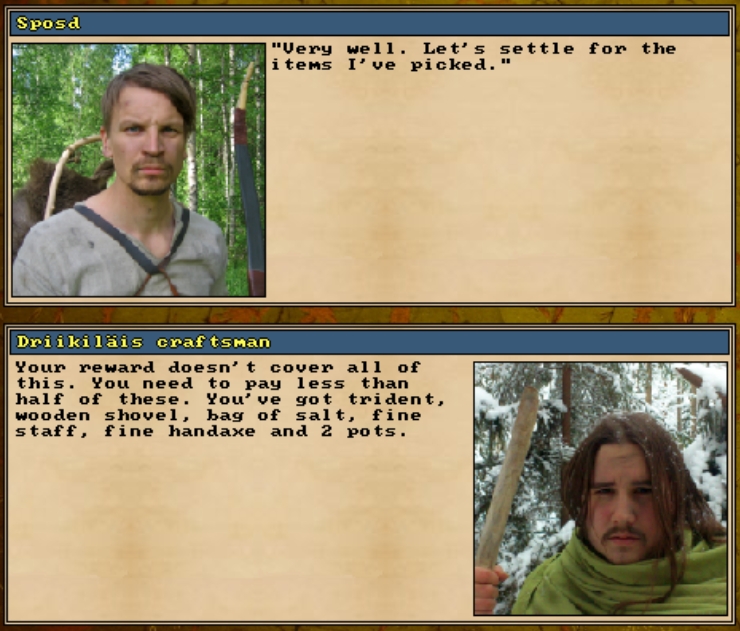 So, how, exactly, does the ice react to an inanimate object roughly the weight of an elk? Just asking.

I was asking for objects in particular.
So, if you happened to try something involving a lot of running and a nearby lake, you can still have a slightly emotional event if you try to move the carcass from the hole, and to the iced over tile you're standing on?

Wait, can you even move corpses? I kinda-sorta haven't touched the game in the better part of forever.

Yes, corpse (carcasse) moving has been implemented a few months ago.

yeah, like vfabien pointed out corpses can be moved - it was actually added a version or two ago.

Total load on the ice matters if it breaks or not. So even if it would hold your weight, both you and the elk carcass might be too much.