Crafting makes an early appearance, and Claustrophobia gets a first patch UI overhaul.

Posted by TheIndieForge on Jan 5th, 2013

Hello everyone! The alpha launch has so far been as successful as I could have hoped for, so thank you to everyone for making that possible. The comments have been great, so please keep any suggestions and thoughts on the game coming in. The more I get, the better I can make the game. I've been working hard right since launch, so, on with some news:

Claustrophobia's UI has bugged me for ages, mainly because it was made as a placeholder, then stuck in the game all the way up to alpha. I also dislike how much empty space there is on screen at once, and how the actual game window is badly centred. So, without further ado, the new UI: 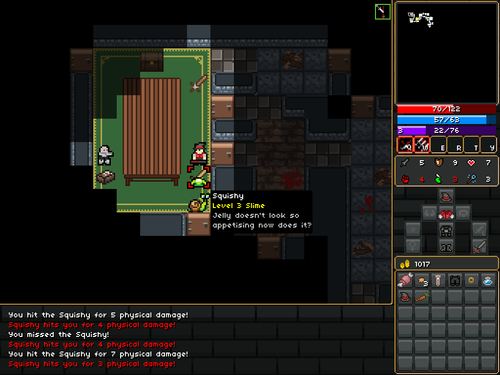 I hope you'll agree that this is much nicer on the eyes, and of course, the menu and skill systems are now properly designed to fit it too. Of course, the resolution has now changed from 1366x768 to 1024x768, but since most of the screen was in the fog of war anyway, it's no big loss. Resolution options will be coming soon, so if people want to return to widescreen dimensions, I'll probably make a split version of this UI too.

So yeah, this was always going to happen. It just happened quicker than expected. Crafting will be making an entrance into 1.0.2 (the current version should be 1.0.1, but I may have messed the versioning up oops). It looks somewhat like this: 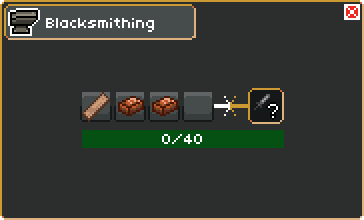 I don't want to give too much away about how crafting works, but, as you can see above, crafting involves combining 1-4 different materials to create a new item. As you craft, your crafting level increases, allowing you to combine higher quality materials. What you craft is decided by the quality of the materials you use, and what type of materials they are. There are no set recipes, just combinations of materials which make different gear types. The rest is for you to figure out.

If you want to see some gameplay, and hear someone else's opinion on Claustrophobia, then go check out Ridler Gaming's Unfinished Works video, linked below. Go sub to his channel, he has some really good content:

So, as you can see over on the right there, I now have a Twitter account. If you want up to date news on Claustrophobia's Development, and probably some general game design conversing as well, then go follow @theindieforge.

Alpha 1.0.2 will launch some time within the next few days, keep a look out! Thanks again for all the support, and keep your comments coming in.
~TheIndieForge

Thanks, should be a good one!
~TheIndieForge

Nice UI and finally some use for all the crafting materials. Additionally, I can now use my tower PC to play the game (My TV has a standard resolution of 1360x768, which is 6 pixels narrower than the former resolution of the game).

Still, I wonder what to do with alle the money I got. I raked in more than 100000 gold, and no good stuff to spend it on.

Thanks. Crafting materials and consumables' drop rates have been reduced, and the amount of materials available increased, so you won't be collecting stacks and stacks of pointless copper ore anymore.
The sell price of items was massively out in the last patch, and high level items didn't scale in cost. Both of these problems have now been solved.
~TheIndieForge

How about a 4th tree in the skill tree that is more general, it could increase fog of war, gold drop, magic find, crafting results etc. It could scale with the level, like lets say every 5 level you can put one point in there. It could also aid to the gameplay, like detecting nearby enemies behind a room or a little arrow showing up, pointing to the next shop and so on.

Also I would love to see scrolls drop with different spells based on intelligence value.

Not a bad Idea. Not sure exactly where it would fit on the tree though! Utility is always good though, and I like a lot of those ideas. Thanks for the suggestion!
Scrolls and potions will be dropping soon, both of which are affected by Alchemy, which will come in one of the patches after Blacksmithing.
~TheIndieForge

After thinking about it, I believe that having all those bonuses permanently would probably ruin the game. How about having those as temporary buffs from shrines/altairs or scrolls? - or maybe as a lets say 100 turns buff from defeating bosses?

Scrolls will only be temporary so don't worry about that. And altars already exist (all be it in a primative state). I like the idea of a buff from defeating bosses though.
~TheIndieForge

This looks fantastic - I love these sorts of games! One HUGE request: When you do the other resolutions, could you kindly add 1024 x 600? I would love to have this on my netbook!