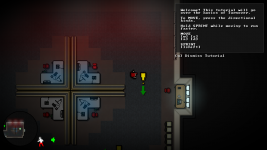 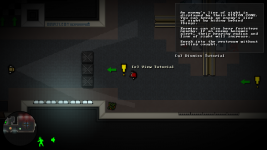 Turnover now has an in game tutorial to help players out with the fundamentals of game play. The tutorial can be accessed at the main menu.

Creating the tutorial was interesting, because I wanted to give players an overview of the game without spoiling every game play situation that the player will encounter. It was a bit of a balance, but I feel this gets the job done. The tutorial should take about 5 minutes to complete, and it goes over basic gameplay elements that make up the game.

One feature I had been working on is displaying sound radii blips and enemy hearing radii blips in the minimap, just to give the player a little help when it comes to sneaking around. As I began to code it in, I realized how hacked together the enemy hearing system was. So, I ended up rewriting the whole thing.

To the player, the old hearing system and the new one should function almost exactly the same. In the back end, the internal hearing checks should be far more accurate and faster. Some values had to be tweaked to accommodate the new system, so some hearing radii and noise radii may be slightly different, as hearing is a little more “mathematically perfect”.

After I rewrote that system, I easily implemented the minimap radii hints. Now, the minimap will show the sound radii of emitted noise (player footsteps, thrown objects, etc…), as well as the general hearing radius of enemies. 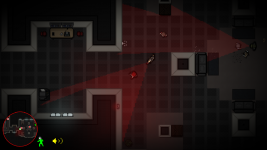 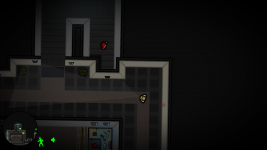 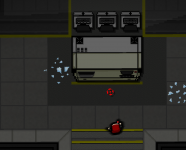 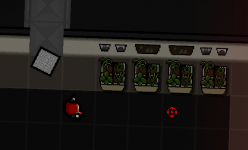 I went over a number of the game’s sprites and improved the shading and perspective. Most notably, I changed the walls to be slimmer, which is a little more perspective correct, I think. I just wanted to fix a few things that were bothering me.

Else… If that isn’t a programmer heading, I don’t know what is.

There are couple minor bug fixes that didn’t make it in time for this update and are in the pipeline for a future. There are also a few outstanding issues (revolving around mobile chipsets) that I have been unable to replicate in my testing. I’ll keep experimenting and hopefully I’ll have a break through on those.

After 6 months of post release development, Turnover is at a place that I am pretty happy with right now. I’ve incorporated most major pieces of feedback and have tended to every issue that I have been able to replicate. For the first time since release, my “Feature Set” to-do list is empty.

Soon, I’m going to shift my primary focus to my next game.