Turnover has been update with experimental custom level support, as well as a handful of important bug fixes. 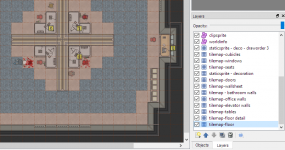 The latest Turnover update is up on Steam and I’ve added experimental support for custom levels. I’ve been kicking around the idea since Turnover was in beta, and after some quick tests, it seemed to be easy enough to put together.

If you have experience in Tiled, then putting together a level should be fairly straight forward.

In a nutshell, how does it work?

This update also includes a couple of important bug fixes.

In Mac, I’ve fixed some older, hacky audio code. This should reduce or eliminate crashes/segfaults related to OpenAL-soft. Even though this was an issue I had been chasing for a while, I haven’t had any bugs reports regarding this, thankfully.

While porting some Turnover stuff over to my new game/engine, I was able to get an important piece of drawing code to crash in both the engine and the GL driver. Apparently, I had been doing something wrong when it comes to memory allocation, so I fixed the problem and backported the changes over to Turnover.