I’ll take an opportunity this week to go over two things: The Linux build and where Turnover stands on the whole.

I’ll take an opportunity this week to go over two things: what I have completed this past couple of weeks and where Turnover stands on the whole.

The majority of work that I have done recently is to make what I have completed so far feels like a mini-version of what Turnover will ultimately be. It feels important to me to make sure I get an idea of what the final product is going to be like. I’m making sure that I have a grounded style and gameplay snapshot that I can rely on as I continue on.

I’ve been adding some niceties and effects to entities to give them a little more life. The spotting and hearing icons for the Sentinels are now animated decals instead of static sprites. 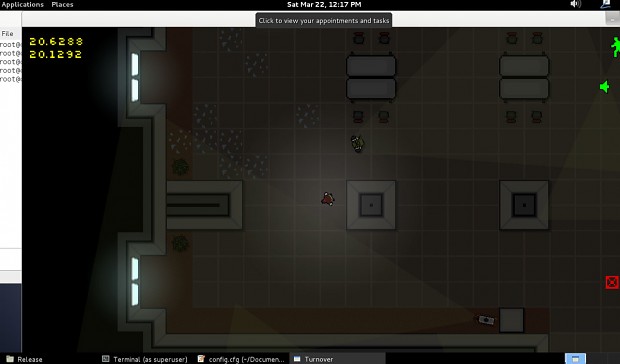 Turnover is now successfully compiling and running just fine in Debian 7. So, Turnover will have a Windows and Linux binary upon release. I plan on doing some more testing in a couple other popular distros before release.

If I had to take a guess where Turnover stands right now in the cycle of development, I think it is hitting the 25% completion mark.

Here’s a rough breakdown of where things are:

Everything is going great! Sometime during Spring, I’ll likely put together a feature video on how the game plays. Can’t wait to see what others think about it.