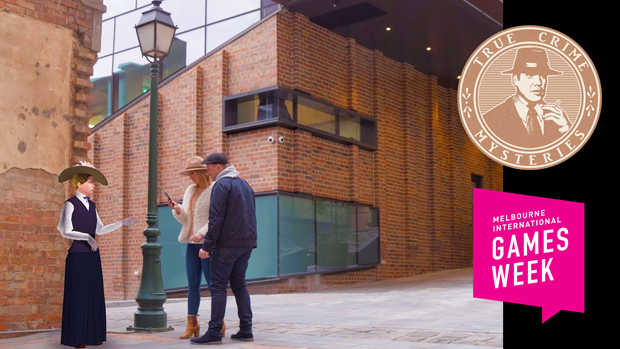 Players are propelled on an exhilarating adventure through the streets of Melbourne past, exploring heritage sites where spine tingling events went down. Collecting clues and questioning the delightful deviants who lived in the laneways of Little Lon.

The historically accurate game investigates a series of clashes that landed Ernest Gunter in hospital and led to his eventual demise.

Furious friends and family struggle to gain justice for Gunter, convinced he was hit in an unprovoked attack; while associates of Bourke Street Rat, John Evans, claim Gunter attacked Evans with murderous intent. A stolen kiss, money owed to the mob, a hired hitman. Are they telling truth or lies? You decide!

‘Misadventure in Little Lon’ features sound design by Sianna Lee, and players can find real newspaper articles and artefacts from the Little Lon archaeological dig hidden throughout the game.

Emma Ramsay, 10Tickles Co-founder said “We are excited to be launching our first game in the True Crime Mysteries series during Melbourne International Games Week. ‘Misadventure in Little Lon’ transports you from this realm to one shrouded in historical intrigue and can be played from anywhere in the world.”

True Crime Mysteries: Misadventure In Little Lon will be available via the App Store or Google Play ($4.99) from 6 October.

Members of the public are invited to the official launch of ‘Misadventure in Little Lon’ where they can meet ‘real life’ characters and the game-makers. Sunday 6 October, 1pm-5pm starting from State Library Victoria.