A new Forces Of Nature trailer and a Wiki page accompanies this final alpha update as we move onto the beta phase of development. Also, spike traps and snare traps.

Posted by PokingWaterGames on Jul 12th, 2016

Firstly, check out the new Forces Of Nature Trailer to celebrate the move to the Beta phase of development!

Also, we now have a Wiki page where you can find helpful tips for playing the game!

The first new thing you will notice is the lightning. Lightning can cause wildfires which can spread when it's not raining, so they can be particularly dangerous. Luckily lightning only happens when it rains, so usually the rain will put out the fire before it spreads too far. I have made it optional on the world generation page.

There are now two types of traps, the spike trap and the snare trap. A snare trap will immobilise any animals that walk over it, if they are under 100kg. Heavier animals will still set off the trap, but will not be caught in it. Once an animal is stuck in a snare trap, you can wait for it to starve and then collect the carcass, or attack it.

A spike trap works differently. Instead of trapping the animal, it does damage to all animals that walk over it. To reset a trap, there is now also a new button on the side menu which works similarly to the extract, gather and butcher buttons.

Also in this update are smoother animations when objects are created/destroyed. Below you can see the animation of a carcass disappearing and materials appearing when it is butchered. The same principle applies when crafting objects, cutting down trees, etc so everything should look better overall.

I've also improved the battle reporting for your Pokians. You can get a better idea of how damaged arms/legs are affecting a fight by opening up a tribe member's query panel and going to the "Thoughts" tab. 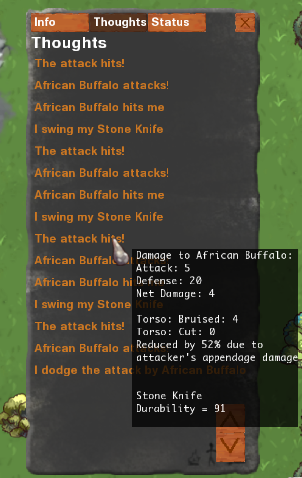 So what's next? I still have a few improvements to make in Tribe Of Pok, and maybe adding more content depending on how well the game does. With the new traps system the game can be considered feature complete.