This week, I tell you about the creation of an ingame tool to make timelapse videos, and also about the loading screens I added to entertain players while waiting.

Dyeing clothes nearly finished
Hi everyone, I had lots of free time this week, so I've made some nice progress. Last week, I talked about dyeing clothes. While the basics worked, there were a lot of parts in the game that were not yet 'ready' for handling clothes with colors. That's almost completely done now; you can now do things like trading dyed cloths and switching dyed clothes while others are close to you. Testing this turned out to be a lot of fun; it felt a bit like a dress-up party :). Image two or three players meeting, and putting on all kinds of shirts and hats in all kinds of crazy colors to see whether others could see what they were wearing: 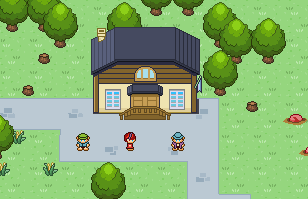 The only things which still does not work is saving dyed clothes in your dresser or in chests. I'm not exactly sure why this gives problems, but I'm sure I'll have figured it out next week :).

Timelapse tool nearly finished
Furthermore, I couldn't stop myself from working on the timelapse tool. It's fully integrated and working now, and produces beautiful mp4-files. You can see the video on Vimeo here:


It's me gathering the materials for and building a road. I've also put the video on YouTube, but for some reason YouTube transformed it into [very bad quality video] (while the original is as sharp as possible). I've been tweaking the video creation settings all day, and now the tool can produce videos which look acceptable on YouTube as well - but that's too late for this recording :/.

The only part of the timelapse tool that still needs works is that I expect that it won't be able to capture longer recordings, as it saves all snapshots it takes in memory. I'm thinking about making it save everything to the hard disk every 100 seconds or so, but we'll see what works best. All in all I am very happy with how the tool turned out. It increases the group of people who can make a YouTube video of Olvand from people who own and know how to work with complicated screen capture software to everyone who can click a button, so I really hope this will mean that more people will make videos.

Loading screens completely finished
Another thing I've worked on, again in the context of the user-friendliness, are loading screens. So far, when you started the game, the screen was black for some time. At slower computers, it even gave a message 'Window is not responding' for a few seconds, just because the game is so busy collecting all the stuff it needs. I expect this might have scared off some people: a game that does not respond and even freezes before it has even started is not a nice way to say hello. Therefore, it now shows 'Loading', an image and a random, witty comment about waiting to entertain you. Three examples: 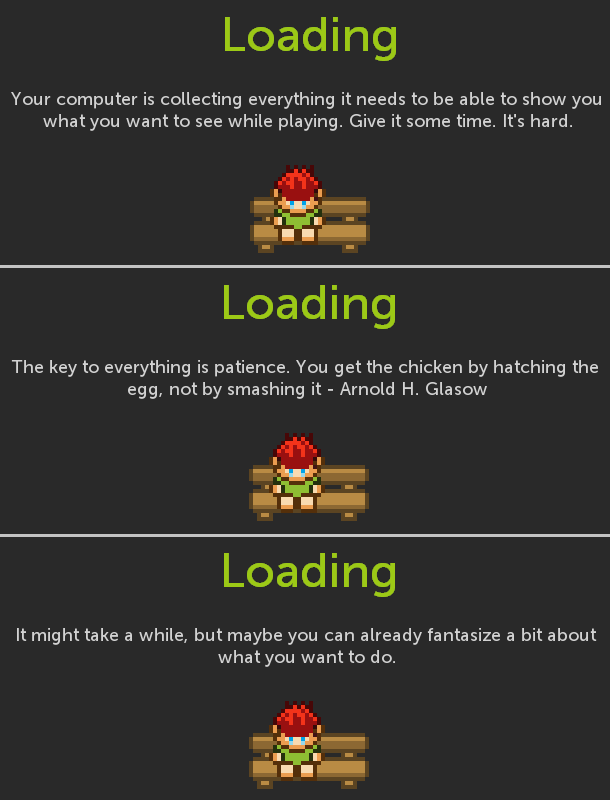 I've always wondered why loading screens aren't a little more entertaining, as people spend a lot of time looking at them. Therefore, I might even go further in a later stage in development, and give the players even more to look at. One idea is an image that changes with the hour of day. So the guy you see here could be sleeping on his bench at night, yawning in morning, etc.

Finally, I will be on holiday in Portugal the next two weeks, so there will be a break in blogposts. I hope to be back with interesting new development stories after that! See you then!

Nice job! Keep it up!