The first Goblins have made their way into the game and are now being playtested. While that's going on, as always, we've implemented a bunch of smaller things from our todo. The most important one this week: Throwing Weapons and a bit of love for ranged combat in general. Also, Paul has been busy as ever continuing his visual rework. Wiedergangers and all armors in the game got a makeover!

The first Goblins have made their way into the game and are now being playtested. While that's going on, as always, we've implemented a bunch of smaller things from our todo. The most important one this week: Throwing Weapons and a bit of love for ranged combat in general. Also, Paul has been busy as ever continuing his visual rework. Wiedergangers and all armors in the game got a makeover!

Let's talk about ranged combat in general for a moment. There's some things that work well already, such as the difference between bows and crossbows, line of fire and friendly fire. But then there is the issue of ranged combat, generally speaking, not having quite enough of an impact on how the game is played. Players seldom invest into the Ranged Defense attribute, as ranged opponents usually don't pose enough of a threat, and using ranged weapons themselves is usually reserved for a token archer or two.

To address this, we've taken several steps. First, view range for all units has been increased by one, and the range of bows and crossbows has been increased by one as well. This way we're emphasizing the strength of ranged weapons and make for more situations where they can be of use, while at the same time making it easier to find enemies running. Second, we're rethinking the place of throwing weapons in the game and introducing a bunch more. Here we go.

Those throwing weapons are being handed out to some melee opponents as we speak. Not to everyone, of course, but Goblins are very fond of them as they synergize well with their other tools, and Bandit Raiders may also throw an axe your way every now and then. Even a few Young Orcs may now carry javelins to throw before a charge. If the only alternative is charging into your spearwall, your opponents may now opt to just pelt you from afar and punish your static defense line.

With ranged weapons now more common, Ranged Defense should also become a more important choice on level-up and in choice of shield for keeping your Battle Brothers safe. It’s still not a must-have, but it makes a difference - and very specialized builds, such as the famed Nimble Swordmaster, now come with a clear weakness that can actually be exploited by the AI.

Continuing with the visual makeover we announced last week, Paul has given the Wiedergangers some attention. Not only have they received some polishing, they now also sport their very own hair and beard styles fit for half-rotting corpses.

Those of you who follow Paul's Art Thread, our Facebook or Twitter will already know - most of the visual makeover this week has been armor. We tried to give all the armor are more realistic and detailed appearance, but also a bit more of a used and less fresh look. Pieces of armor were extremely expensive in the middle ages and used for a long time, sometimes over several generations. 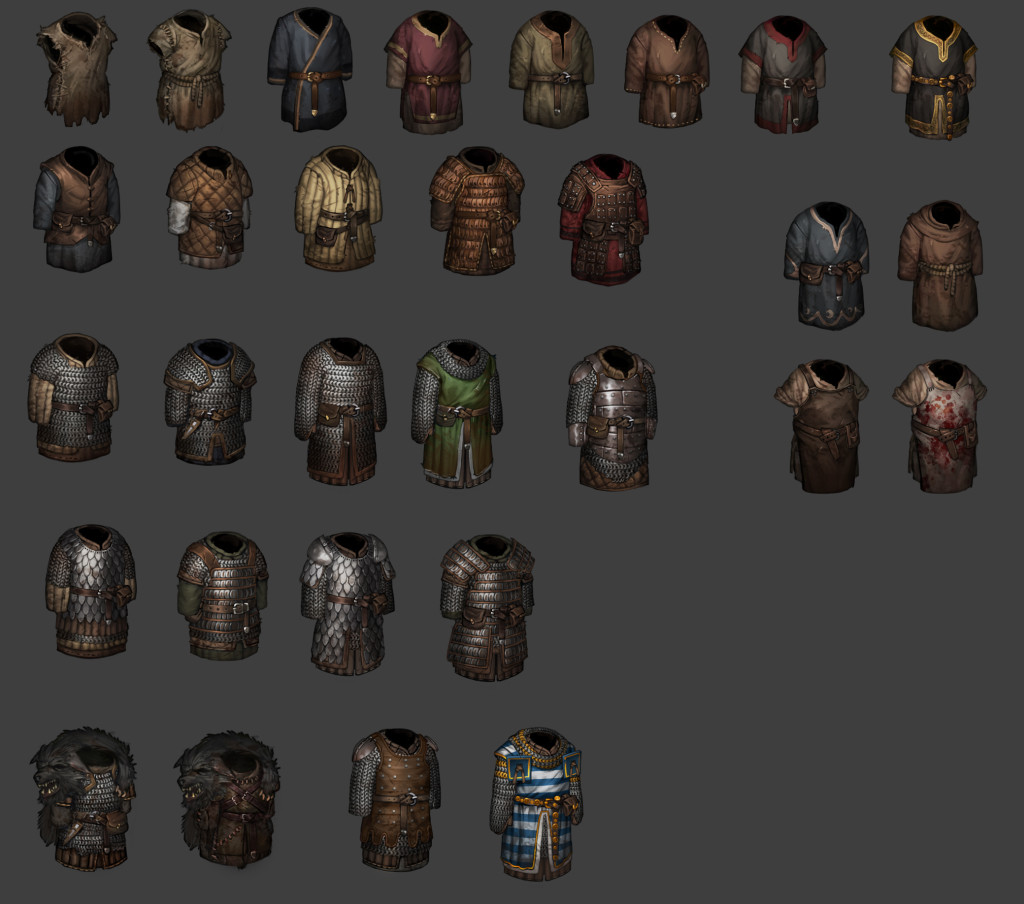 At the same time we’re looking to make the progression in armor value something to be more visually recognizable. Heavy armor should look the part, which is why Heraldic Mail no longer has the highest armor value in the game but is now situated more closely by the other mail armors. We've also filled quite a few gaps in progression with entirely new armor and will shuffle values around a bit for everything.

You are getting better and better in this
Lot of details and eye candy effects, nice