Post news RSS Through the Woods Before and After Screenshot Comparisons

Check out our before and after screenshot comparisons of the demo of Through the Woods, which we will be bringing to the Indie MEGABOOTH at PAX Prime in Seattle.

Through the Woods is on the Indie MEGABOOTH at PAX Prime

Hello friends, strangers and everyone in between!

We thought we'd let you know that Antagonist are going to be at the awesome PAX Prime in Seattle between the 28th and 31st of August. Not only that, but we will be on the Indie MEGABOOTH!

Here's the official video of the MEGABOOTH lineup for PAX Prime 2015. Sadly, we didn't get any gameplay in the video, (possibly not colourful enough? :)) but it's still a great little trailer with some awesome looking games.

So, all this stuff is very exciting, and it's a huge deal for us. We are the first Norwegian company to have been invited to exhibit on the MEGABOOTH and there are over 70 other incredibly talented and interesting developers on this year's stand. We really can't wait! If you're interested in checking out the newly updated Through the Woods demo, please come check us out.

You might be wondering what's new about our demo, so we'll tell you, the most obvious thing being the massive graphics overhaul. Over the past two months, we've migrated the project to Unity 5 and started upgrading the graphics. With the help of our fully custom textures, SpeedTree, the Substance series, new custom assets, Sonic Ether's ambient occlusion, and a beautiful, brand new, fully custom water shader, the game look incredibly good. This is the way we want people to experience Through the Woods for the first time. We've also added some new music, created crows and a bird behaviour system and a.i. systems for one of the enemies and also started incorporating stealth mechanics so you can finally sneak. Phew! That's a lot of stuff. And that's why, even if you've played Through the Woods before, or downloaded our free demo, it would still be great to see you on the Indie MEGABOOTH at PAX.

To show you the progression of how the game has looked over the past year, here's a little comparison: 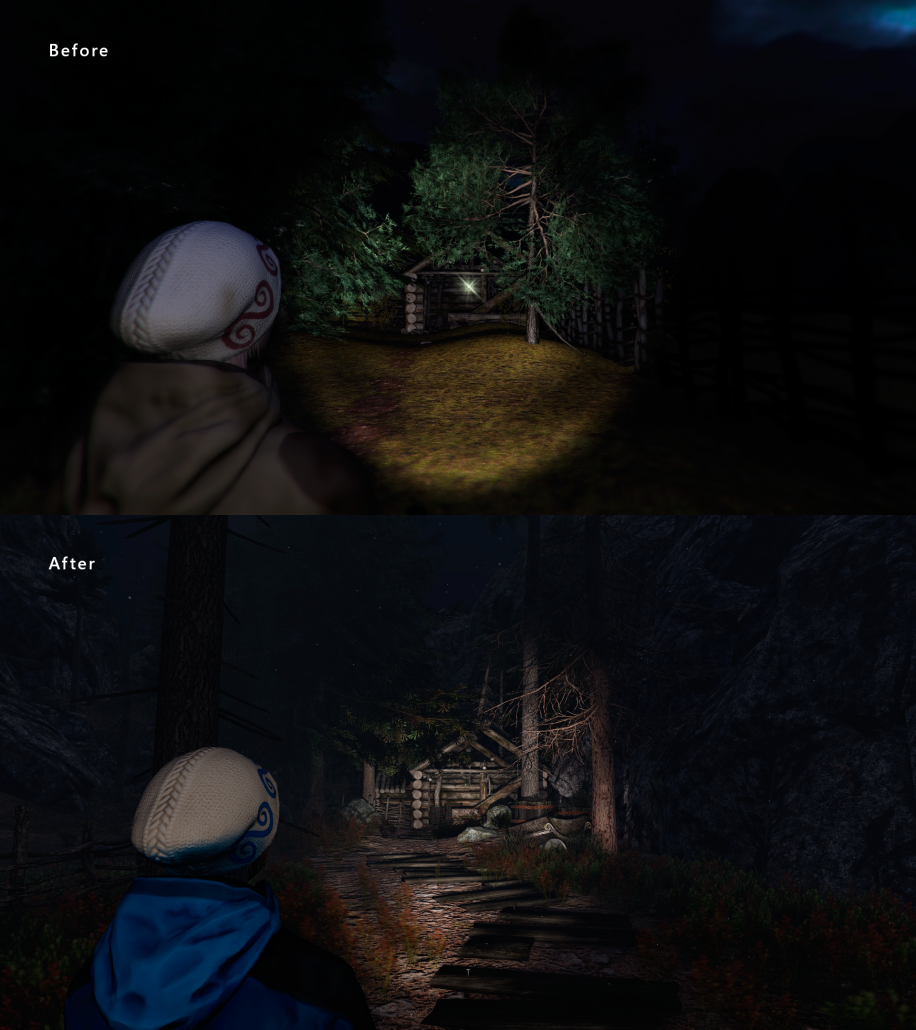 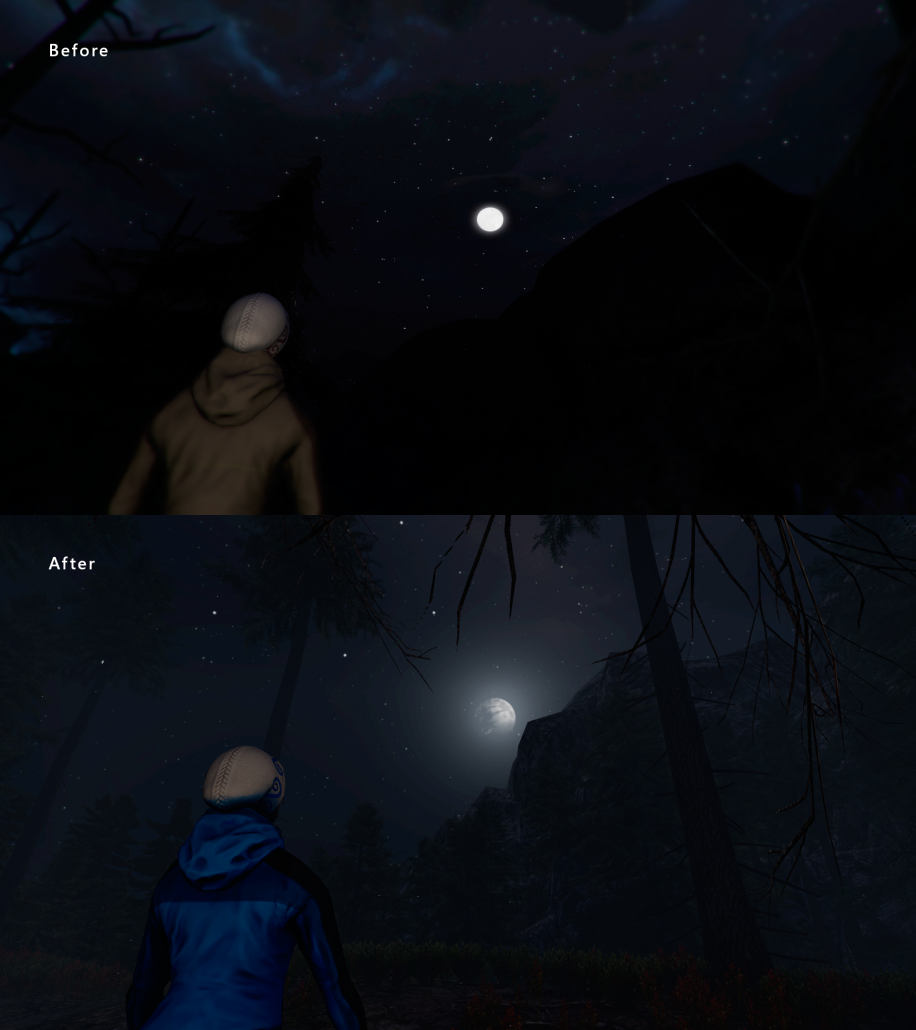 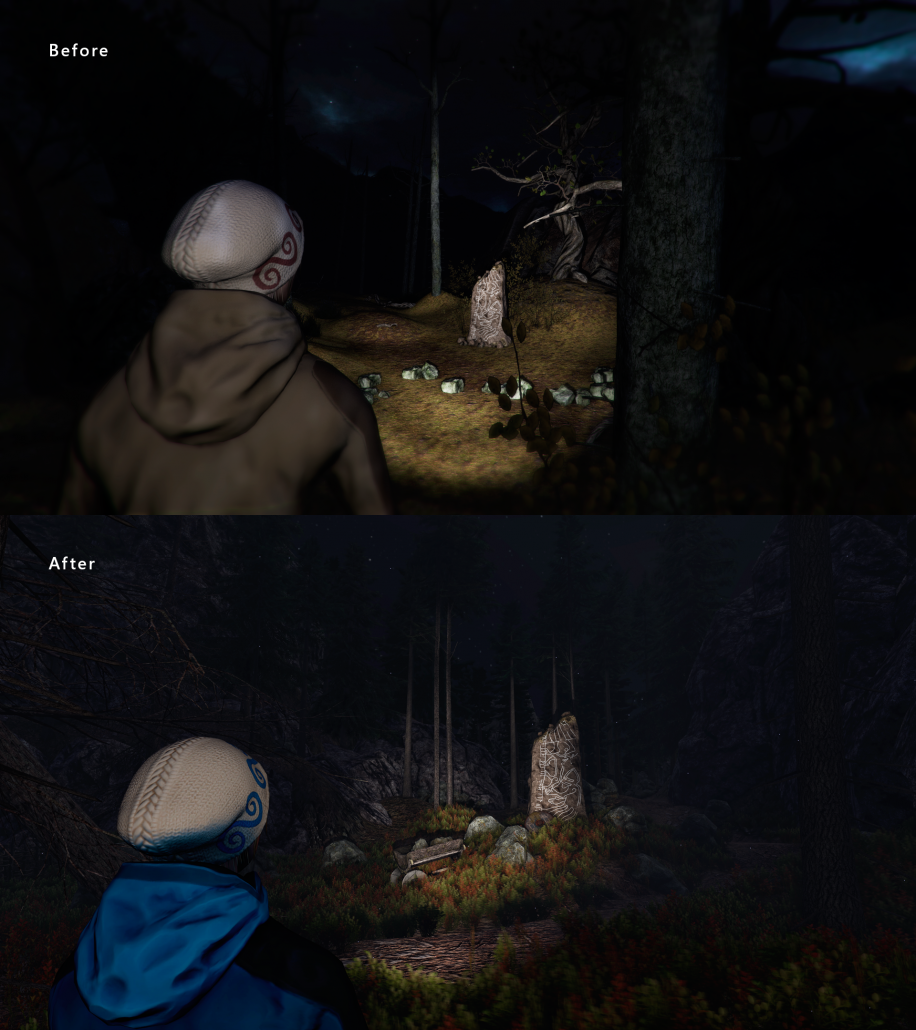 So, that's it from us for now. See you in Seattle!

Thank you for the nice comment and feedback.
Yes, we are aware of it, this update was kind of rushed out there with the announcement of us going to PAX.

We just moved the project from Unity 4.6 to 5.1 so we are still adjusting a lot of things, and this color-bleed is definitely one of em. :)

Wow, yeah. The before's weren't bad but the afters are really nice!