I’ve got a big new There Will Be Ink update out now on Steam & Itch. The first “Act” of the main campaign is now available. The enemy this time around is made up of an alternate set of units with their own art, weapons, sound, etc. There’s a new tutorial mission available, and, since the game has changed a lot both mechanically and visually since the old Beta 1 trailer, I recorded a quick “tour” of the game. Watch it below and bask in the awkwardness of my narration!

Many other features and content have been added, changed, rebalanced, and fixed. Some highlights include new abilities, sounds, stats, badges, terrain, new unit states like “Prisoner” and “Bleeding Out”, and even a boss fight! I’ll jump into a some of the new features in detail, but check out the changelog down below for a full list. I’m also narrowing down a release date, which I’ll cover in the “Road Map” section below.

New (Partial) Campaign: “There Will Be Ink”

The new campaign contains a story that sees the player up against a new enemy known as the “Alt Write”. The true nature of the enemy isn’t revealed until after the first act, so for that one player out there playing TWBI for the story, you will just have to be patient! The first mission throws you right into the action. It eases off a bit after that but then ramps up again pretty quickly. I set out to make this campaign a little easier than the Beta campaign, to be a little more gentle on new players, buuut I couldn’t help but veer back towards the true spirit of the game, which is to be difficult but fair, a game that takes practice to master. I suppose it will be up to the player to judge the new campaign’s difficulty, so if anyone has any feedback, I’d be happy to hear your thoughts. I’ve also been laying out some mission-specific game mechanics in the new campaign. One such feature is the new “prisoner” unit state, which can be toggled for units in the map editor as well. A prisoner will sit in place, tied up, until an ally rescues them. Another mission sees an endless stream of enemy paratroopers landing in the area. Without spoiling the details, there is also a boss fight at the end of Act I. 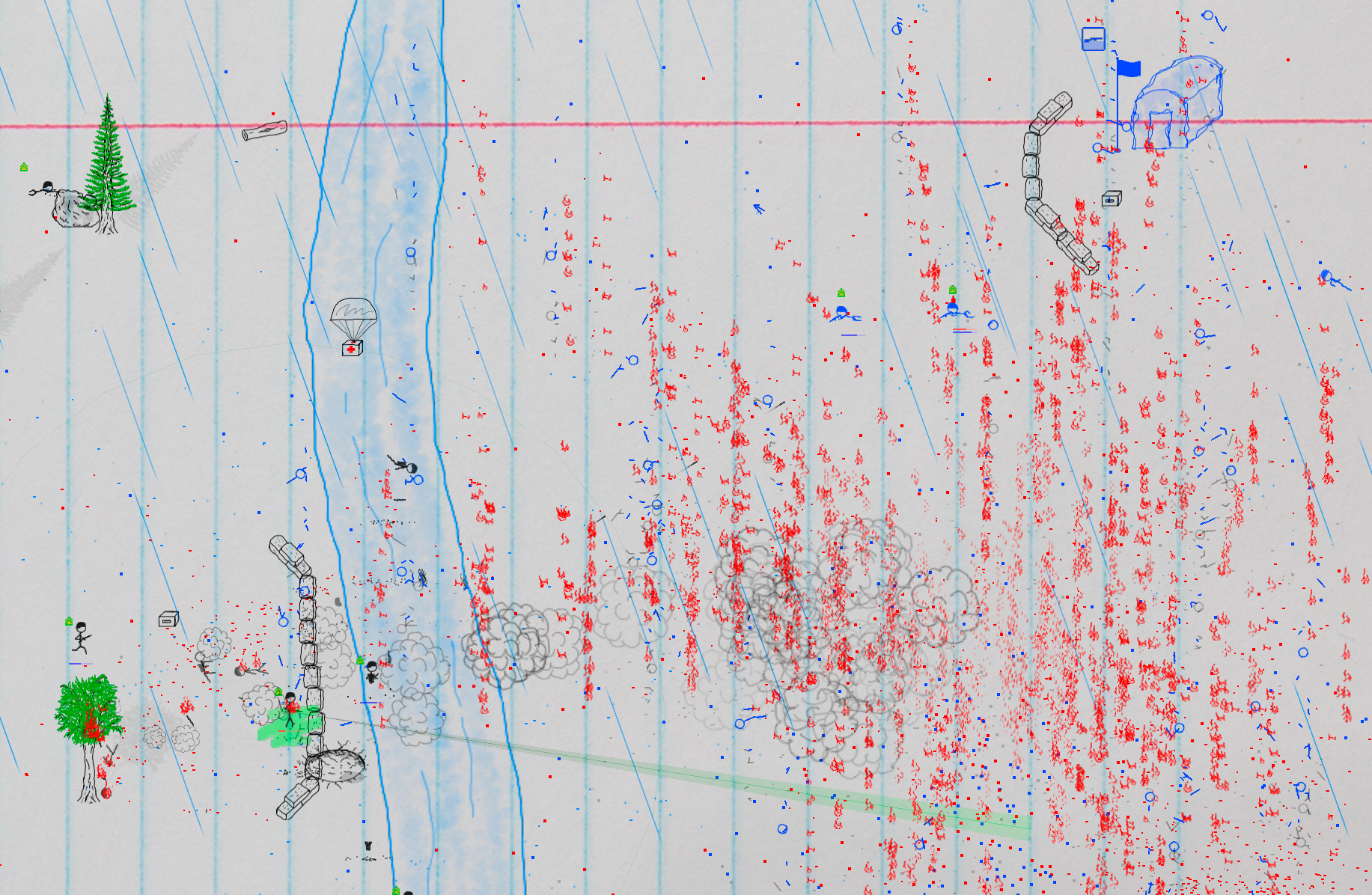 The new unit set is essentially an analog to the base unit set. The new units and all weapons have their own art, sounds, and stats, and the new Alt HQ & Barracks have their own art as well. I drew them with my left hand, which turned out to be a very uncomfortable process. I guess I am not ambidextrous. While pretty similar to the base set, the new units offer a bit of variety and, perhaps more importantly, lay a foundation for adding additional sets in the future (sci-fi set? Fantasy set? cat set?). In addition to being able to fight against the Alt set in the new campaign, the new units and buildings are also available in the Map Editor and in Quick Battle. 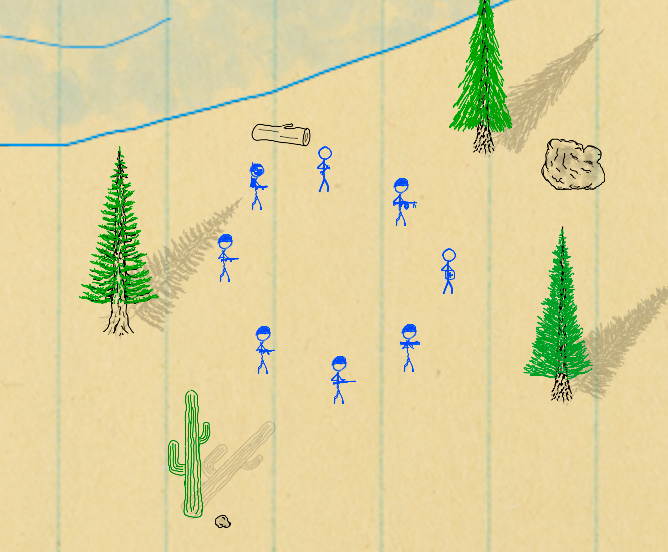 The aptly titled “Grabby Mode” allows the player to relinquish control of a unit to observe the battle and control a giant hand that can be used to select, or “grab”, and take control of another (friendly, non-incapacitated (“capacitated”?)) unit anywhere on the battlefield. Since someone playing with keyboard & mouse can already take control of units by middle-clicking them, Grabby Mode is mostly relevant to players using a gamepad, where previously the only way control a specific unit was to use the d-pad to jump to the next nearest unit on either side. Three cheers for Grabby Mode! 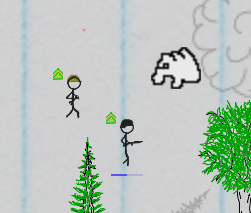 Units who die from wounds will now enter a “bleeding out” state, where there is a short period of time (10 seconds, plus 2 seconds per rank level) where the unit can still be saved if a medic heals them in time. Units dying by “conventional” means also have a 10% chance per rank level of going into a bleed out state. This new mechanic makes medics a little more valuable while also giving ranked units a slight chance of living a little longer.

Units of rank 2 and up will now roll when moving to cover or in order to avoid incoming rockets. Units of rank 3 and up will do the same (and a little better) while also running when approaching their target or doing an ammo run. The new “Advanced Training” and “Expert Training” start all units off at level 2 and 3 respectively. These abilities cost a lot of points. I wouldn’t expect Expert Training to be put to use during the first playthrough of a campaign but perhaps on subsequent playthroughs. That being said, the campaign isn’t finished yet, and I’m aiming for 24 missions, so who’s to say! Units who level up on their own during battle will also take advantage of these new behaviours. Check out the video above at about the 7:38 mark to see Expert Training in effect.

The Barracks page now has two sheets of campaign stats and now includes campaign-wide stats for Comrades Destroyed, Longest Streak, Longest Kill Streak, Time in Battle, Deaths Avenged, Grenade Kills, Mine Kills, Damage Repaired, and Mines Defused, in addition to those that were already present. The two Streak stats are now tracked each mission and a notification is given at the end of a mission if a new record is set. “Time in Battle” is also a brand new stat that tracks the total time spend in battle. This stat wasn’t previously tracked, so it will start at 0 for all campaigns whether in progress or not. Also added are a few new badges relating to boss fights and friendly fire.

I’m finally starting to feel confident that I’ve shaped There Will Be Ink into a finished game. I don’t intend to add any new major features before version 1.0 of the game (though there will certainly be more to come after that). I was considering a June release, but with the pressure of big summer sales around the corner and given that the game still needs a good bit of polish, I’m looking to spend a few extra months on finishing the main campaign and improving the aspects of the game already in place. For instance, I’d like to review each unit in the game and make sure it is fun and worthwhile to play as that unit (I’m looking at you, Engineer!). The Campaign Editor is still a little rough as well, and while I’ve tidied up the Map Editor and added some shiny “stickers” in place of the bland labels of yore, I’d like to fancify that up some more too. That being said, there will be some additional mission-specific mechanics that will appear in upcoming campaign missions. I won’t go so far as saying there will be tanks, but There Will Be Tanks! Wait, I should clarify that. There will eventually be tanks, probably. Since the game’s inception I wanted tank (they were an integral part of the doodles of yore), but I dismissed them pretty early on as being out of scope and being too much work to implement, especially to draw at the amount of angles that would be needed to fit in (given the hand-drawn graphics of the game). One thing working on this game has taught me, however, is that I ain’t afraid of no work! I will probably tackle that beast post 1.0, but in the meantime I already have some simpler vehicles in the works for other missions.

But alas, I digress. What this all comes down to is that I’m aiming for a tentative September 2020 release. It may be sooner; it may be later. Nobody knows! In the meantime, thanks for reading and thanks for playing. As usual, I’m happy to receive any and all feedback you might have. Cheerio!

Don’t yet have a copy of the game? Check out the Summit Fever Twitter account for a giveaway around the time of this posting. As usual, the game can also be found on itch and Steam.

And here are the Steam Key giveaway winners, parachuting into action, for anyone who may have been following: