I will tell about the last updates, their of everything four. The torpedo defines collisions The boat received a limited number of devices of start-up of torpedoes The new panel is added Mine and torpedo, friends or enemies? and last - waves, waves...

In last up-dating I showed the added torpedoes. This time torpedoes not simply exist and them it is possible to shoot, they accepted some new properties.

And so, the first and probably the most important - torpedoes learned to define collisions. In case of what to them all the same, whether protected it, or the ship, or even a mine! About the third "or" a bit later.

The second, the boat on a legend has two TA (torpedo tube) actually as was made, our boat so - has now 2 TA.

The third, at last I completed TA control bar. I.e. torpedoes can be started up from the keypad, and it is possible from a control bar the ship. Important in my opinion feature and difference from keyboard option, this existence also indications about readiness TA to start-up of torpedoes.

Well and last that was made, these are a few trifles, it is a big slanting wave. Big not in sense high, and in sense that the wave area the big. The truth I while in thoughts, it is necessary or not, probably I in a consequence will remove it.

and here screens where a torpedo at first the first TA from an underwater state with the lifted periscope hits the target, and then the second TA, already from a surfaced state without a periscope, so - successfully gets to a target. 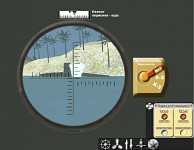 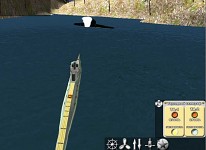 In pictures it is visible also a control bar torpedoes .

Ah yes, nearly I didn't forget that wanted about the third "or" to write. I will be short. The torpedo in case of collision with a mine will be destroyed, i.e. as well as it is necessary - will blow up. The truth and mine doesn't remain whole, it will be comprehended by the same fate. In other words, it both plus and minus. On the one hand it is good that it is possible to clean too the dense barrier a torpedo, but with another, in case of attack of the opponent if suddenly on a way of a torpedo there is a mine, the enemy will leave from punishment because the torpedo will hit a mine, both will come to an end, and the opponent will continue following without any damage. All all now.

The appearance of an effect have already changed! But he's looking good in the dynamics, static picture does not show dignity.