Last week I talked about fixing bugs and tidying up issues in preparation for releasing a playable build that includes the first few levels and areas of the game. The battle continues this week -- here's a list of issues and bugs that have been utterly destroyed (fixed)!!

An issue and criticism that's been repeatedly brought up is the way player character shadows are drawn when a light source is nearby (torch, candle, etc.). I've finally gotten around to addressing this and tidying it up.

While not 100% where I'd like it, it's a lot more appealing to look at and far less dramatic than how it used to be. I can now turn shadows cast by instances of light sources on and off, so if there is a lone torch against a sky only backdrop, for example, there won't be a shadow drawn awkwardly against nothing but sky. 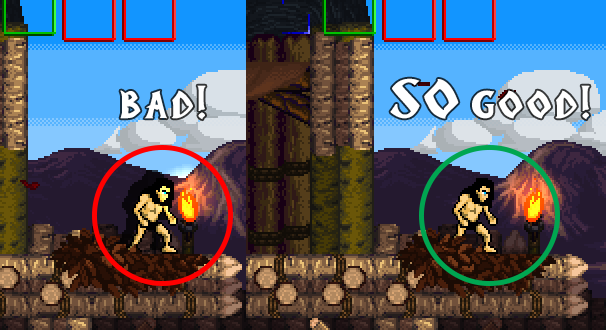 And for those tricky cases where there is only a limited amount of space that you'd like a torch to cast a shadow across, I have put "shadow limiters" in certain areas where, if there is a limiter between an entity and a light source, the shadow will not be drawn. 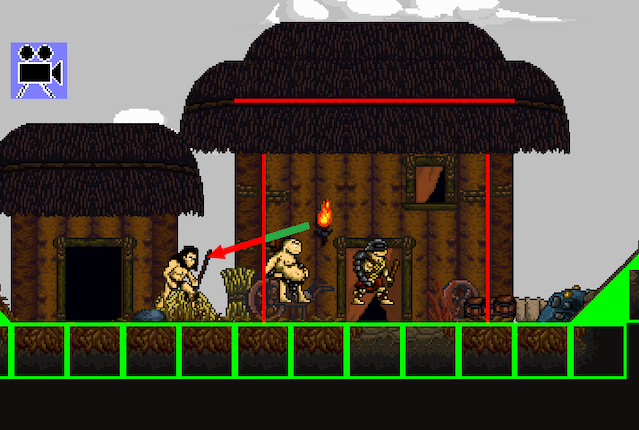 Here's the video of the livestream I captured of trying to sort out this very issue (the video will be available later on youtube later, as well):

Speaking of bad guys, I finally switched on spiky bits causing damage if you attempt to jump on their heads. I've gone through every enemy object in the game (so far) and made sure this works where appropriate (enemies that can potentially spawn with a spiked/horned helmet, creatures that can spawn with naturally grown spikes or horns). This definitely makes fights more interesting and challenges your ability to make snappy tactical decisions. I got so used to testing the game without this feature turned on -- it's nice to get my butt kicked in a brand new way, ha!

In this livestream here, I also talk about padding out the game with artificial progression. By that I mean I had planned to include certain items in the game (the core UI code is also built around this) that gave you the ability to quick slot off hand weapons and certain consumables.

Those boxes there are (or, were) tied to whether or not you found the "Item Pouch", "Hunter Belt" and "Warrior Belt" respectively. I've scrapped all that and these features are available right from the get-go (your equipped shield now shows up on the hud, too).

Take the Item Pouch, for instance: consumables that are equipped to this slot can be used on the fly with a mapped button press. If you did not have the Item Pouch, you would have to pause the game by going into your inventory screen, accessing the consumables tab, FIND the item you wanted to gulp down, and "use" it. The same result can be achieved by simply having the chosen consumable slotted to the Item Pouch box and hitting your "Use Item" button when you need it.

The only real difference between these two methods is that one simply takes longer and is a hassle. It doesn't make the game more interesting or challenging... So, bye bye equipment-dependent sub item slots!

LOTS of UI FixesFor a while now, since I changed the way the game was drawn to the screen, the in-game menu has been drawing all sorts of wonky. That's now fixed, as well as properly displaying your shield. 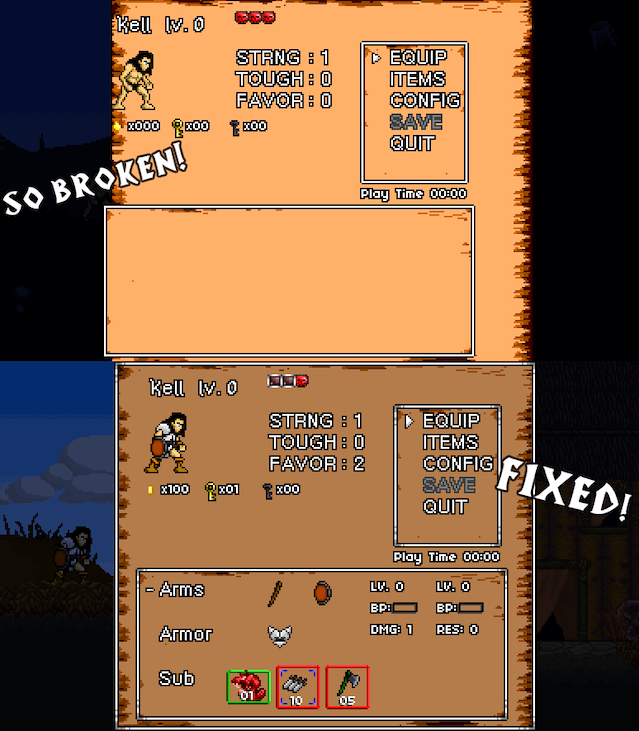 I've also eliminated the "Shield" menu item in the equipment screen, since shields and weapons exist within the same inventory list. The manner in which you equip a shield is the same as how you equip a sword, etc. Having a seperate "Shield" access node on the equipment manager felt needlessly complicated and redundant.

I've also adjusted the brightness of text boxes and general UI windows to make text more readable. I want to give players more options concerning that later, like different style backgrounds for these elements. 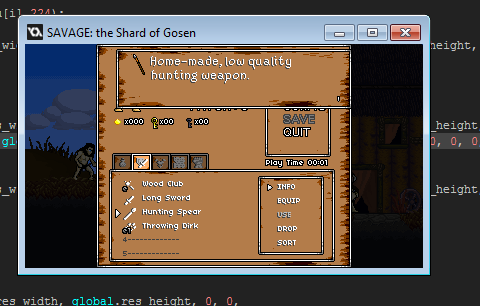 Here's the list of things that still need to be (potentially) addressed or fixed before I release the playable build:

I'm still on track to get you guys a playable build, but I still have to figure out the delivery mechanism -- like, it would be GREAT to start figuring out how to get Steam keys to everyone who still needs one, and give them access to a live development build that I update regularly before launch. I'll keep you all posted as I figure out the particulars on that as well!

That's all for this week! Have a great rest of your weekend and I'll see you next update!
-Matt

I hope to see game in Steam and buy it :)

Very informative update as usual! The game looks amazing!!! I sound like a broken record but I really enjoy the visuals! Huge retro pixel art fan here!!! Anyway, keep up the tremendous effort and looking forward to the next update!

Hey, it's very encouraging to hear! And same here (too much time sitting with my face in front of a CRT watching all of those chunky squares move around).

The shadow knows, and it came out of nowhere like a midnight shadow: Youtube.com .. that sounded better in my mind.

Oh man -- been ages since I watched either Vampire Hunter D! Also, forgot how glorious the animation is in that newer one!